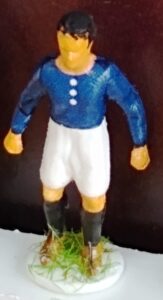 The players chosen are those who interested me while writing a number of books on the Arsenal in the Woolwich era. Some are not necessarily those who were the best players, and it could easily be argued that England international Jacky Mordue was not the best outside right in his time at Arsenal during the period.

For me, Mordue was picked as he was the most talented right winger of his generation, just not at Woolwich. Indeed Charlie Buchan thought him to be the greatest two-footed forward he had played with, or seen. Mordue is the epitome of the one who got away. Maybe he would have remained a bit longer had Phil Kelso stayed as manager past February 1908, but in truth Mordue needed to return to his home region, and Sunderland proved to be the right place for him.

‘Jacky’ Mordue spent a year at Plumstead becoming the 197th player to don the red shirt, before moving back to the north to find fame in the pre World War One Sunderland team.

Born in Edmondsley, Durham on 13 December 1886, his birth date was two days after Arsenal made their debut in the football world as Dial Square. From a very early age he worked as a coal miner, labouring over ground on the pit heap. His family lived in Sacriston, a small mining town very close to his birthplace, and for a number of years he played junior football for Sacriston Rangers, before moving to Spennymoor of the Northern League.

In October 1906 Jackie was signed by Barnsley, a second division side, and almost immediately attracted interest as he hit a dozen goals in 25 league matches. Leeds City, Blackburn, Derby, both Sheffield sides and Everton all enquired or made offers for him.

However, Phil Kelso signed him in Barnsley on 8 April 1907 for £450 and the arrangement included a friendly played next season on 16 Sept 1907 versus Barnsley at Plumstead, which the home side won 1-0. Mordue’s Woolwich Arsenal debut came five days after signing and in the following month he was part of the Gunners first ever overseas tour to Continental Europe. 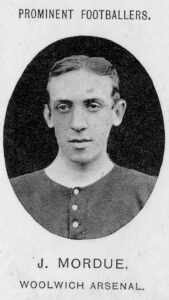 A tricky, accurate and speedy winger, his command of the ball was remarkable and while being only 5’ 7’’ and slight of frame, was very difficult for burlier defenders to dislodge. His excellent distribution combined with an eye for goal, though this was not evident while at Plumstead owing to his role being primarily one of provider. He appeared mainly on the right wing at Arsenal, but despite his quality and playing alongside his brother-in-law, the Gunners goalkeeper Jimmy Ashcroft, he did not really get to grips with London life and looked to return to his native north. 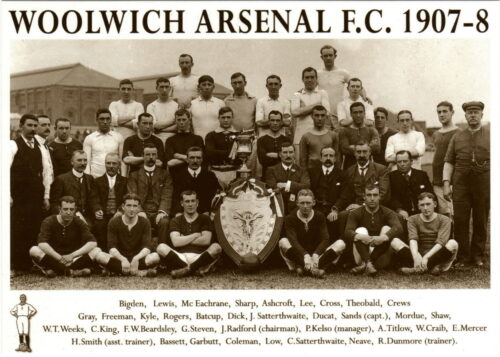 Overall he played 28 times for the reds scoring once in his penultimate performance for the club against Everton. He also made 16 reserve appearances hitting the net on four occasions and consequently won a South Eastern League Championship medal in 1907/08. After his final competitive first team game on 20 April, he travelled with the team for a post season tour of Scotland, before moving to Sunderland on 6 May 1908 in exchange for Sam Raybould.

Often the Woolwich press would comment that Mordue was rarely used to the best of his ability while at Arsenal.

“The play of Mordue was not at all bad, but he seemed a bit out of place, which is not surprising to hear, considering that he is an inside left, and ought not to be playing at outside right. Mordue in my idea is a born forward of whom we have not yet seen anything near the best …  He may turn out trumps after all  … Mordue at outside right for the reserves was a needless experiment, and for the first team a waste of talent” . Woolwich Gazette 13 December 1907.

The irony of this comment is that Mordue was, as his subsequent career showed, a natural outside right. Soon after leaving Arsenal he returned to the Manor Ground in this position with Sunderland, who gave the Gunners a 4-0 drubbing, with Mordue setting up a trio of goals, all with pin point crosses from the right wing!

“It was a low down trick to bring one of our old players along to smite us” … Mordue, it must be conceded, has filled out physically and in knowledge of the game since he was located at Plumstead. That he should have done so much towards thrashing his old club would be the one spark of comfort to some of his old friends.” Kentish Independent 27 November 1908.

He excelled in the north-east alongside Charlie Buchan, who arrived a few seasons later – and also for a brief period was re-acquainted with ‘Tim’ Coleman who was at Roker Park during the 1910/11 season. In 1912/13 they narrowly missed out on the double as Sunderland won the League title but lost in the FA cup final. During this fruitful period he represented England twice in 1912 and 1913, and also appeared for the Football League three times.

Known in Sunderland as the ‘Prince of Penalties’, he scored 27 spot kicks for the Black Cats, but like all those of his generation lost four seasons of his career to World War One. Mordue served as a Gunner in the Royal Garrison Artillery (RGA), joining up in June 1916, and was a regular for the RGA football team against other battalions in France. During the conflict he played for Sunderland in 20 wartime games, and also guested for Houghton Rovers and Fulham, playing alongside ex-Arsenal man Gordon Hoare and managed by Kelso who earlier took him to Woolwich.

He continued at Roker Park once peacetime football returned for another season, and after scoring 82 times in 294 appearances left on 11 May 1920 for Middlesbrough. He went onto Durham City in early March 1923 as player-manager but left in January 1924.

A talented all round sportsman he played handball (or fives) to a world class level, and was an accomplished cricketer and billiard player. John Mordue died on 6 March 1938 in the Sunderland Municipal Hospital aged 51. He was buried in Bishopwearmouth cemetery at a ceremony attended by his old playing partner Frank Cuggy, and current FA cup winners Bobby Gurney, Raich Carter and Johnny Cochrane. 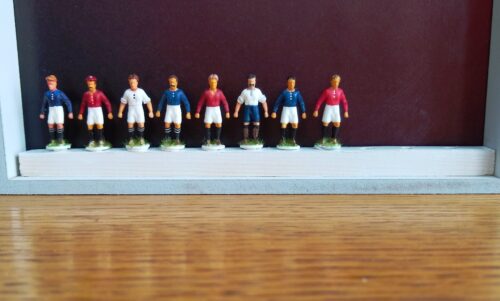