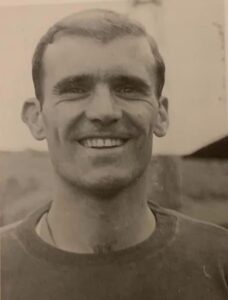 The first ever Arsenal Youth team goalkeeper, his chances at Arsenal in the first team were stymied as the side had a surfeit of top class keepers, and in particular Jack Kelsey.

Peter Goy was born in Beverley, Yorkshire on 8 June 1938. He played football for Brumby Secondary Modern School in Scunthorpe, then represented Lincoln schoolboys, the Appleby‐Frodingham Works Under‐18s and the Appleby‐Frodingham Athletic side. He was signed as an amateur by Tom Whittaker, and taken onto the Highbury Ground staff on 5 August 1953, after a scout witnessed him in goal for the Lincolnshire boys team as they were smashed 11-1 by Derbyshire boys. Heaven knows what the score would have been without him!!!

A Joiner by trade, he lodged in the house of the wife of Alex James, after coming down to North London as a Highbury apprentice. Goy quickly became the regular keeper for the Colts, and indeed was the first ever Youth team keeper for Arsenal which was set up in 1954 as a side to play in specific age limited competitions. This was distinct from the ‘A’ team which as the third team often trialled young players but had no age restrictions.

Signed professionally on 15 June 1955., he was called up for National Service in April 1957 and served in the Royal Horse Artillery. Very much the third string keeper, he made a debut on 24 February 1959 against Leeds as both Jack Kelsey and Jim Standen were injured. By doing so he became the 474th player to appear for Arsenal. He then played his final game at the end of the same season on 4 May 1959 versus Birmingham. Both games were at Highbury and both won, meaning Goy had a 100% win record in his two competitive games for the Gunners, only letting in one goal.

In addition he made 47 reserves and around 150 Colts appearances, acquiring winners medals as South East Counties League champions and League Cup winners in 1955/56, and Metropolitan League winners in 1958/59. With no realistic path to stake further claims on the number one spot, and an apparent rift with manager George Swindin, he moved on 22 October 1960 to Southend United for £2,000.

Generally the number one at Roots Hall he was transfer listed at his own request in October 1963 after losing his spot, but fought and gained it back only for the club to transfer list him in May 1964. After 124 appearances for the Shrimpers, he headed onto the Hornets in Hertfordshire in July 1964. After 30 games and a full season at Watford he moved back to Yorkshire in the summer of 1965 to Huddersfield Town.

While there he was part of the interesting named trio of Goy, Hoy and Joy, a swinging sixties precursor to the current rhyming English cricket trio of Foakes, Woakes and Stokes. An understudy he made only four appearance before moving with his family to South Africa at end of the 1966/67 season. He turned out initially for Westview Appollen (Port Elizabeth) in 1967 and then Hellenic (Cape Town) in 1968/69, but a chance to help out with the family silk screen printing business meant the family moved back to England.

On his return to the country Peter was given a trial in August 1969 by Colchester, and after a brief time at Cambridge United, ended up at Southern League Tonbridge Angels instead. He played at the Kent side until a series of Achilles injuries stopped his playing career short after only a season at the club, and was given a testimonial in November 1970. After he ended playing he had a brief stint at Epping in management and then as a referee.

A natural sporting talent, he was a youth athlete in Lincolnshire particularly in the high and long jump. A more than decent all-rounder he played for the Arsenal FC cricket side while at the club alongside professional cricketers Leslie Compton, Jim Standen and Don Bennett, and his talent warranted a trial at Middlesex, which he regretfully did not attend. In later life golf and bowls took up a great deal of his time.

He lived in Shoeburyness after retiring from the game.