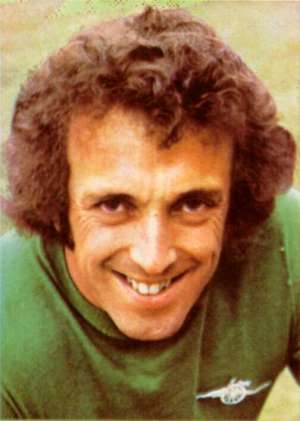 The long term deputy for Bob Wilson and Jimmy Rimmer in the first half of the 70s, Barnett appeared in the 1972 FA Cup final.

Born in Northwich, Cheshire on 16 October 1946 he was spotted early as a huge talent and became keeper for Mid-Cheshire schoolboys, Cheshire schoolboys and then England schoolboys. Feted by both Matt Busby of Manchester United and Everton’s Harry Catterick, he decided to go with Everton.

On leaving Winsford Grammar school as a 15 year old in July 1962, the club agreed to make arrangements for Geoff to continue his receive schooling due to his young age. Signed professionally in May 1964, he won the FA Youth Cup in 1965 as the Toffees beat the Gunners in front of 30,000 spectators, putting in a performance that ensured Barnett was placed on the Arsenal radar. He also represented England as a youth international on a number of occasions. Promoted to the first team squad he could not displace Blues number one Gordon West and often vied with Andy Rankin as reserve while at Goodison Park, which meant in essence he spent most of his time in the A team.

After ten Everton first team performances, Barnett was purchased on 1 October 1969 for £35,000 by Arsenal manager Bertie Mee, who was looking for a trusted understudy to an injured Wilson. He became the 537th player to don the Arsenal colours when he made his debut a few days later on 4 October 1969 at Highbury in a 1-0 loss to Coventry after which he went on a 13 match run until Wilson returned in December. During this run he played against Sporting Club de Portugal in both legs of the first round at the start of the Fairs Cup winning run, keeping clean sheets on each occasion.

At Highbury like at Everton he did not get many chances, staying in the shadows owing to the excellence of the respective first choices, which was never better displayed than during the 1970/71 double season as he remained in the Combination side owing to Wilson being an ever present for the first team. 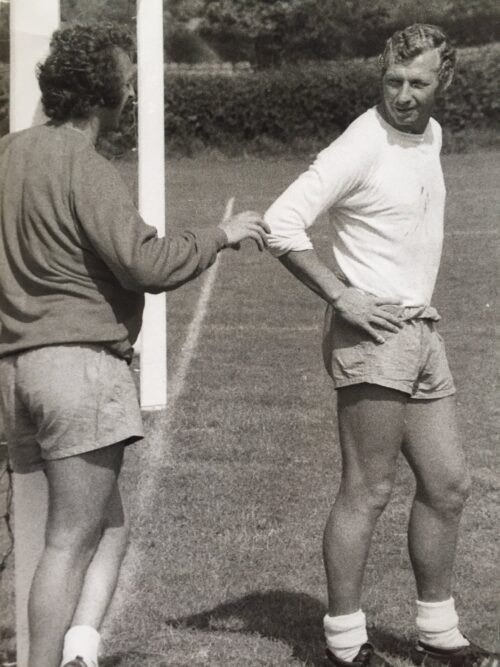 However at the end of the next campaign, Wilson was badly injured with a torn cartilage in the drawn first Semi-final in April 1972 and faced a long lay-off. This led to Geoff’s longest consecutive string of games for the Gunners and indeed in his top flight career, as he played 30 times at the end of the 1971/72 season and well into the 1973/73 campaign until Wilson regained his place in November 1972. Consequently, this gave Barnett his career highlight as he appeared in the FA Cup Semi-final replay and the FA Cup Final at Wembley of 1972, and picking up a runners-up medal. He had a decent game in the final and had no chance for the one Leeds goal that clinched a boring final.

After this run there were few chances even once Wilson retired, as he was replaced by the exceptional Rimmer. Interestingly of all the goalkeepers who played for Arsenal at least 40 times he has conceded the fewest goals per game at 0.78. A great statistic for a reserve!

His final game came on 13 Dec 1975 at Stoke, and in all made 49 first team appearances, kept 23 clean sheets conceding 38 times. Additionally he played 191 reserve games including gaining a Football Combination Cup Winners medal 1969/70.

A keen cricketer he played for a number of local sides. Additionally he appeared in the North London Derby Cricket contest in 1973 as Arsenal beat Tottenham at Finsbury Park in aid of the Woodberry Down Boys Club. John Radford and Charlie George opened the innings, Bob Wilson kept wicket, with amongst others Peter Storey, Peter Simpson, Bob McNab, and his old Everton team mate Alan Ball donning their whites. Bertie Mee and Spurs manager Bill Nicholson acted as umpires. 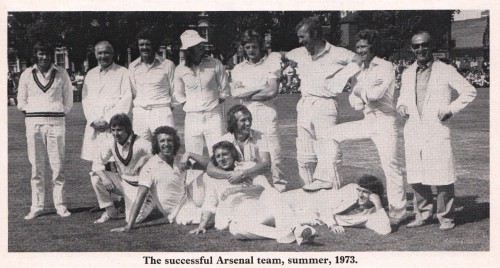 Geoff Barnett sitting in the front row, second from left.

He left Highbury in February 1976 to take on the tenancy of the Waggon and Horses in Watton at Stone, Hertfordshire. Additionally he signed for the Minnesota Kicks for whom he played and coached until 1981 when they folded as a football concern. From here on he moved between the two countries, running a restaurant in America, and pubs in England including the George & Dragon, Holmes Chapel, Cheshire.