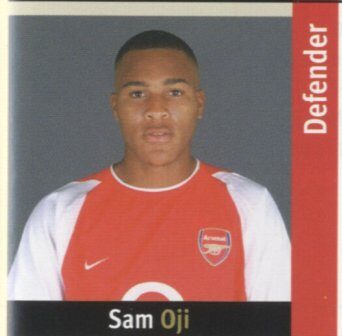 A strong physically imposing defender who played in over 60 youth games, and a handful of reserve outings, for The Arsenal around the start of the Millenium.

Born on 9 October 1985 in Westminster, Sam was spotted as a youngest and as a schoolboy made eight and nine appearances for the Arsenal U17s in 2000/01 and 2001/02 respectively. He impressed and was signed into the Arsenal academy in the summer of 2002 as a Central defender. During 2002/03 he became a major feature of the U17 side turning out 19 times, and also played five times for the Arsenal U19 side. In the next season Oji graduated to be a mainstay of the U19 side playing 23 times, and additionally in 2003/04 made four Arsenal reserve appearances.

However, he did not remain at Highbury instead signing his first professional contract with Birmingham City in the summer of 2004, and spent four years at the Blues, making one first team appearance. Whilst there he also had loan spells at Doncaster Rovers making five apps in 2005/06, Bristol Rovers appearing five times in 2006/07 and four times for Leyton Orient 2007-08. He joining the O’s permanently later in the same season and added 11 more performances, making 15 in all.

At Hereford in 2008-09 he made five appearances, before a serious knee injury effectively ended his career as an English league professional footballer. In 2009 he tried out at Swedish side Ljungskile, but his knee injury morphed into cruciate ligament damage and was so serious it prevented him from playing for two years. After recovery he joined Tamworth in 2011 and while there he turned out 39 times in two seasons.

Oji spent time in Ireland with both Limerick in 2013 and Galway in 2015, returning to England with Worcester City in 2016, Hednesford Town in 2017 before joining Highgate United in 2018. The Captain of Highgate United he had recently been made assistant manager at his death on 28 August 2021, aged 35.