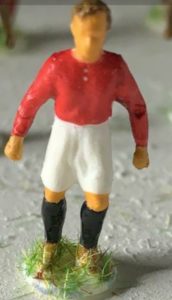 The players I have chosen are those who interested me while writing a number of books on The Arsenal in the Woolwich era. Some are not necessarily those who were the best players, but my first choice most definitely was a star turn in many senses of the word.

Tim Coleman, the 156th player to don the red shirt of Arsenal, was a goal scoring maverick and character who was very much a crowd favourite at Plumstead. He joined when the club were a decent Second Division outfit and left with the Gunners regulars in the top flight, who had improved so much that that they were able to make two valiant but thwarted efforts for FA Cup glory.

Integral to the team throughout his career at Plumstead, Coleman broke the Woolwich Arsenal club goalscoring record in October 1905, when he bagged a brace against Wolves. His final tally of 84 remained as the club record until the Chapman era, when he was surpassed by Jimmy Brain in May 1927.

Born in Kettering on 26 October 1881, he was signed by Arsenal from Northampton Town on 1 May 1902 as an inside forward. He got quickly into his stride ending 1902-03 as the club’s leading scorer, and also achieved this distinction during the 1905-06 season.

Part of the 1903-04 promotion team, he received a commemorative gold medal from the directors for this achievement, still unique as far as Arsenal are concerned. Ironically for one so talented this was the only medal he won as a player in his professional football career. The goals leading to the club’s elevation were forthcoming as he formed a devastating partnership up front with Irish international Tommy Shanks and Bill Gooing. The next season, Coleman lined up for the first game played in the top flight by Arsenal at Newcastle, and a few games later scored the club’s second goal in the highest echelon. 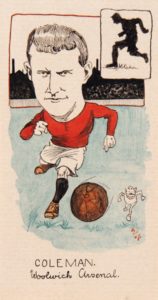 In rare form during the 1905-06 campaign, Tim was picked twice as a reserve for England, but did not play an international until the following season. Coleman gained his sole international cap at Goodison Park on 16 February 1907, making him the second Arsenal player to be picked for England, after Jimmy Ashcroft. He also made a couple of representative appearances for the Football League during this time. In the same two relatively heady seasons at the Manor Ground he was ever-present during the club’s inaugural runs to the FA Cup semi-finals in both 1906 and 1907.

It was also in 1906-07 that Arsenal went for a few brief weeks to the top of the League for the very first time in their history, initially after a win against Liverpool on 6 October 1906. A few weeks afterwards Woolwich Arsenal were still top of the league leading to this appreciation of ‘Tim’ in the leading sports journal of the day.

Woolwich people were charmed when “Tim” Coleman was honoured by the English League last week, and now they are chanting a eulogy of the famous little “Gunner”. He is indeed the lion of the hour with the Plumstead patrons. To him Woolwich must accord the credit of their victory over Notts County at Plumstead. It was he who scored the winning goal in the last minute of the game when hopes of victory had reached the vanishing point. And, mark you this goal of Coleman’s is not the only thing which engendered the great ovation accorded to him as he left the field. He had played superbly throughout the game, displaying judgement and skill far above the average. 22 October 1906 Athletic News

He was part of the team on the first European tour made by Arsenal in May 1907, as they visited six countries playing eight unbeaten games. Coleman wrote about this overseas venture in one of his frequent columns in newspapers, describing it as a career highlight, not for the football but the novel experience, in the ‘Weekly News’.

Coleman eventually left for Everton in late February 1908, after 196 competitive performances. While on the surface this appears to be a simple case of the increasingly cash strapped club obtaining £700 for one of their more marketable players it is more likely that he was looking for an escape route to leave as soon as his mentor and team manager Phil Kelso had left the club two weeks earlier.

His actual name was John George Coleman, but over time he gained the nickname of ‘Tim’ due to his penchant for calling anyone he did not know, or whose name he could not remember, ‘Tim’. He continued as a nationally known sportsman and hugely popular crowd favourite at his latter clubs, being re-united with Kelso at Fulham between 1911 and 1914.

In April 1915 he played in the final game at Highbury before World War One put an end to football for four seasons. But he turned out for the opponents, Nottingham Forest on the wrong end of a 7-0 walloping! It also turned out to be his swansong as after the game he promptly retired as a professional player and re-joined the Footballers’ Battalion, who had recruited him in February.

By the end of the year it was reported in many newspapers that he had been killed in action just before Christmas. His wife went to the War Office with the former Arsenal manager Kelso, who remained a good friend of Coleman, and they found no evidence of his death. A few days later confirmation was received that he was alive, well and in the trenches awaiting action. He seems to have spent much of the war on the frontline, including at the Somme, interspersed with morale boosting performances for the Footballers’ Battalion in inter-regimental soccer games. Much later in the war while in France he won the Military Medal in October 1918 for extreme valour in combat.

After the war he had a few seasons with Kentish non-league teams and, after a period at Maidstone United as player-coach and in charge of the Savoy Hotel works side, took up management abroad in Holland in the mid 1920s. He had some success there with Sporting Club Enschede winning both a national and regional title. He remained in Dutch football for some seasons before returning to life as a labourer in London.

On 20 November 1940 Tim Coleman left his house in Fulham to carry out repairs on a nearby electric generating building which had been affected by multiple German bombs during the London Blitz. It was raining and wet underfoot as he went up to mend the glass on the roof. He lost his footings and slipped from this highest part of the building, falling to the ground. He was taken to the close-by St Mary Abbott’s hospital in Kensington but his injuries were too much and he expired later that day. 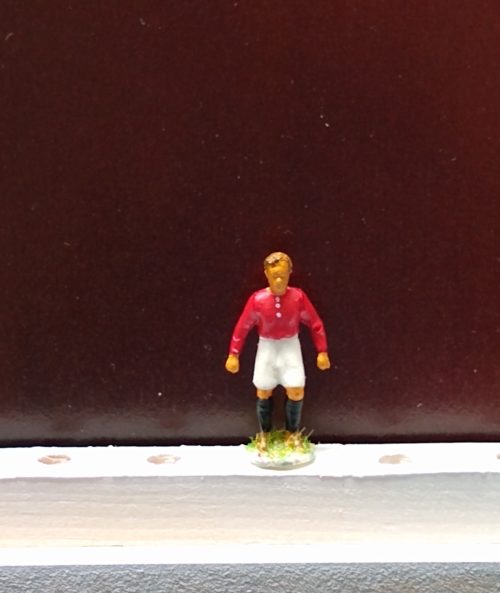 Tim Coleman – The finished figure in the frame