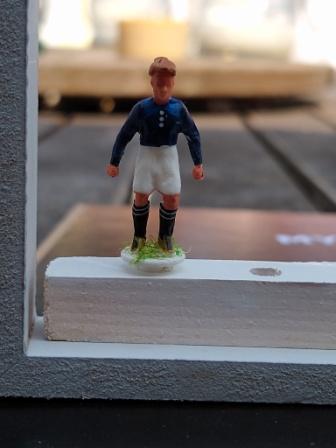 The players chosen are those who interested me while researching and writing a number of books on the Arsenal in the Woolwich era. Some are not necessarily those who were the best players, and it could easily be argued that England international Jimmy Ashcroft was a superior keeper to my choice of number one.

But for me, it had to be Hugh MacDonald as not only was he the first Arsenal keeper to wear a different colour jersey to the rest of the side, but also joined the Gunners on, an unprecedented, three different occasions as a player! However he was not the first Arsenal keeper to wear a blue jersey as in 1907/08 the club had first used blue as their change kit, and Ashcroft had together with all the other players worn this different hue at some away games.

Hugh Laughlan MacDonald, the 190th player to don the red shirt of Arsenal, was a goalkeeper who was very much a crowd favourite at Manor Ground. Standing at over 6 ft he was very tall for the era and became affectionately known as ’Mac’ at Plumstead. Though to be honest almost all Scotsmen were given this shortened sobriquet whilst at Woolwich. He was reportedly known as ‘Henchie’ when he came down from Scotland, most likely a nod to his impressive height and physique. MacDonald, born in Kilwinning, Ayrshire on 20 December 1881, signed for the club on a trio of occasions, in 1906, 1908 and finally in 1912, keeping 30 clean sheets in his 103 games for the Arsenal.

Hugh was signed by fellow Scot Phil Kelso on 29 January 1906 from Beith as a short-term replacement for Jimmy Ashcroft, who was in line for international honours in the home championship and as a consequence for his elevation would be unavailable for Arsenal. Just over two weeks later MacDonald made his Gunners debut on the same day as Ashcroft became the first Arsenal player to represent England. At that time international games were given no special dispensation being played within the normal league schedule.

In the summer of 1906 he moved to Brighton and Hove Albion, after playing twice for the first team. Two years later in early May 1908 he returned to Arsenal from Brighton, as a permanent replacement for Ashcroft who had left for Blackburn Rovers. Ever present during 1908/09, in October 1909 after sustaining a wrenched knee against Chelsea he was picked while injured for the next league game at Blackburn. He limped onto the pitch and was effectively a passenger as the goals rained in. He couldn’t stop anything unless it went straight to him. No explanation was given for him being picked despite being unable to walk properly in the training sessions for the whole week before the game. A 7-0 reverse did not vindicate Morrell’s odd decision, and it only required one more goal to equal the worst defeat ever by an Arsenal team. Common sense then prevailed and Hugh was forced to sit out the next two games. The only games he missed during his second period at the club.

“Sent his other in the wash, silly”

“Rotten I calls it”.

The voices came from behind me on Saturday afternoon as I sat watching the Arsenal-Sheffield United match. The speakers were scarcely experts among football critics and so MacDonald must not mind the very personal remarks upon his appearance. Still that blue shirt was ominous. I know the new rule decrees that the goalkeeper must wear a distinctive colour, but don’t take the short as a mascot, Mac. The crowd got the blues on Saturday and the tint was too suggestive. Why not petition the FA to let you wear something the colour of a smile?”

Up to the same 1909/10 season goalkeepers wore the same colour as the outfield players, but due to the FA changing their laws stipulating that keepers had to wear an alternate colour from outfield players, MacDonald was the first Arsenal keeper to wear a different coloured shirt. As a consequence he was seen mainly in blue for the campaign much to the concern of the Kentish Independent football correspondent and certain fans! Much of the reason the Gunners stayed in Division One during this tumultuous 1909/10 season was due to the skill and tenacity of MacDonald. Keeping his cool during the turbulent last 10 games, he kept six clean sheets as Arsenal moved out of the relegation zone and into safety.

He left for the second time when he moved to Oldham on 1 July 1910 for £375. MacDonald returned for one of the first games next season in October 1910 for his new side, and his reception was one of friendly banter from the Spion Kop terraces, reflecting his popularity despite leaving the Reds.

While at Oldham he was suspended for refusing to play in the reserves and as a result was moved onto Bradford Park Avenue in December 1911, and it was to the Bradford club that Arsenal arranged for this final return on 20 December 1912. Given the poison chalice of protecting the porous Gunners net he could not stop the rot and the club were relegated for the only time in their history, and with a then record low points tally.

After ending his football career he ran the Melbourne Arms, in Sandy Hill Road, Plumstead with his wife. (This pub is as this is written a going concern, one of the few in the area with genuine Arsenal links to still be a viable watering hole.) 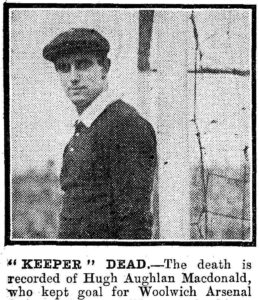 He joined up for World War One with the Royal Garrison Artillery on 11 December 1915, later transferring to the Royal Field Artillery. On returning after the war in May 1919 to Plumstead he continued at the Melbourne Arms, but was to die soon afterwards at the age of 38, on 27 August 1920 as his Army records show that Gunner MacDonald succumbed to Tuberculosis, picked up in the army. His wife was given his military pension to assist in raising their three children. 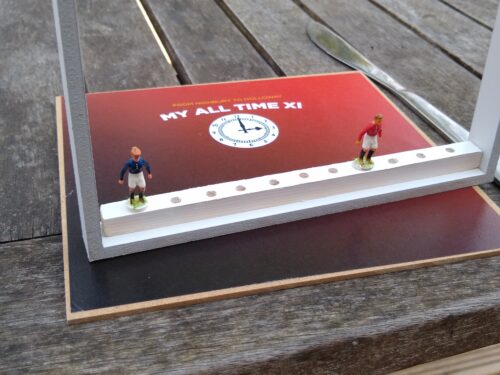 Hugh MacDonald and Tim Coleman in the frame.

Please have a look at our other site: The Arsenal Collection  for more Arsenal memorabilia.