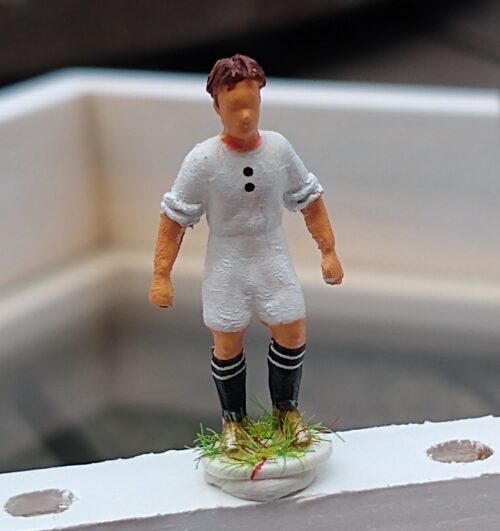 Joe Shaw with his sleeves rolled up

The players I have chosen are those who interested me while writing a number of books on The Arsenal in the Woolwich era. Some are not necessarily those who were the best players, and like Joe Murrell my other full back, Joe Shaw did not set the world alight on the pitch. Despite over 300 solid and competitive games for the club his place is guaranteed by virtue of his post-playing career for Arsenal while in Highbury. A consistent defender, Joe Shaw was an integral yet unsung presence in the club’s rise to prominence after his playing days.

Shaw, the 199th player to don the red shirt of Arsenal, was a steady on-field presence in a period of the club’s history that was marked by turmoil: liquidation, relegation, moving home and a World War was the backdrop to Joe’s Arsenal playing career.

Joseph Ebenezer Shaw was born on 7 May 1882 in Bury, becoming an apprentice joiner. He possessed some major qualities needed to be a good defender in this period: an ability to give the ball a big strong punt up-field and a solid header away from goal. Additionally and not surprisingly given his later career, he was known to read the game well.

He moved to Arsenal in early May 1907 from Accrington Stanley, of the Lancashire Combination league, a northern league full of Football League Division One club’s reserve sides. Indeed he was purchased by Phil Kelso as a back-up player, only making two first team appearances in his first season at Plumstead. Eventually Joe got his chance of a run in the side once Scottish international full back Jimmy Sharp left the club for Rangers in the summer of 1908.

Ever present during the disastrous 1912/13 season, he was given a benefit during the final game in Plumstead against Middlesbrough at end of April. But as it was so poorly attended due to the teams’ plight, the directors made up the proceeds from the 3,000 crowd to the standard figure.

“It was singularly appropriate that Shaw should give of his best on the day that his club was awarding him some practical recognition of his long and valuable services, and the Arsenal have never had a more valiant player. Shaw has earned every penny of the £250 which his club guaranteed him”.

It was during this awful season that Arsenal won only four games and set a record for fewest points in a season! Joe’s figure is in the attire of our one win in the FA Cup. The home team changed in this competition in case of a clash of colours, and Arsenal wore white on the Manor Ground in mid January 1913, for a rare win 2-1 over Croydon Common. The same kit as worn in this photo at home during the next round. 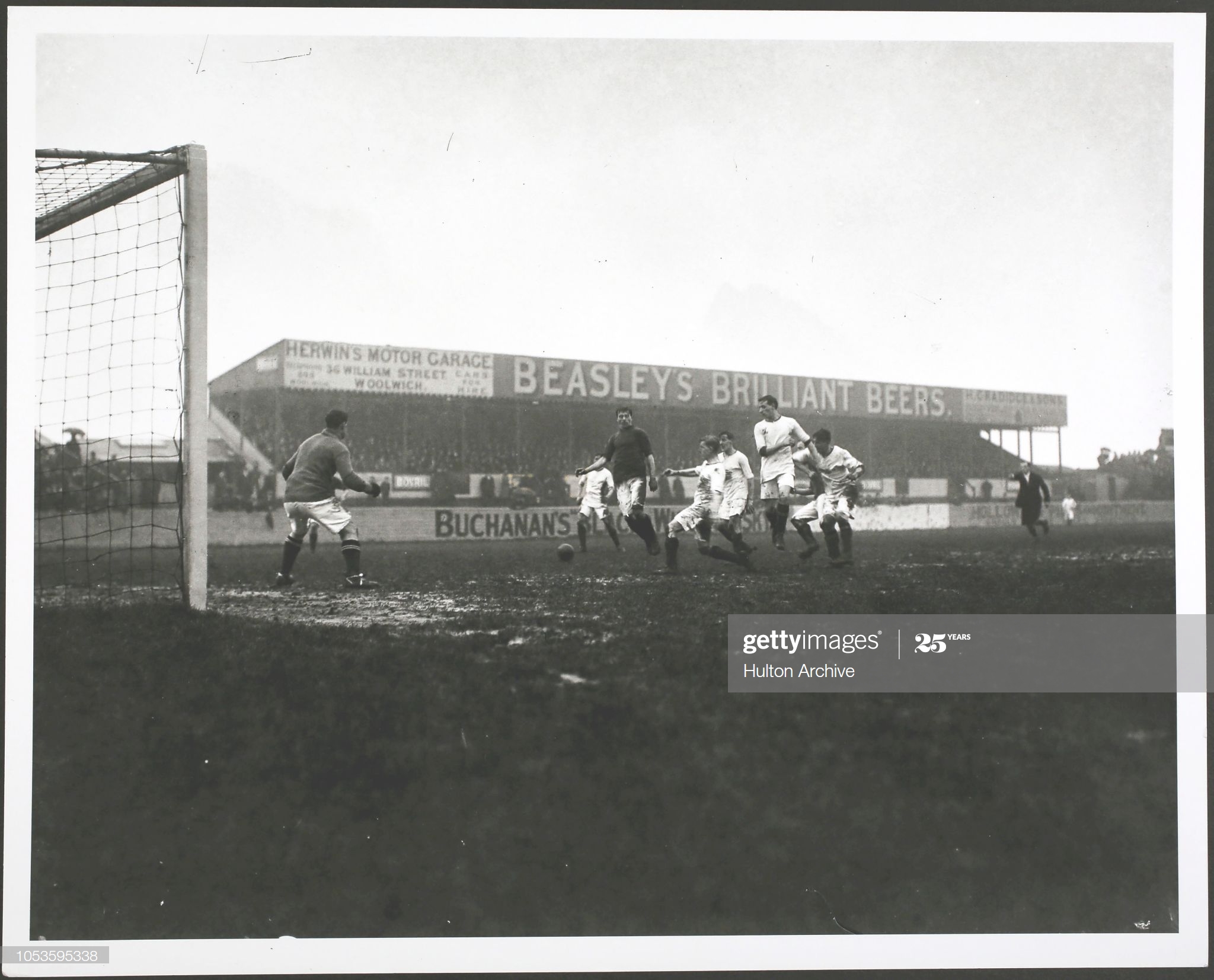 Making the move over the Thames with the club he appeared for the Arsenal in the first game at Highbury versus Leicester Fosse in August 1913. Being ever present for the 1914/15 campaign, he played in the last Division Two game Arsenal was involved in against Nottingham Forest in April 1915.

He turned out in 326 first team games as full back and, like fellow 300 plus performer of the same era Roddy McEachrane, never scored a goal for the club. During World War One he was involved in the production of munitions at the Royal Arsenal in Woolwich, making 68 wartime appearances for Arsenal, and as in peacetime games was unable to trouble the score keepers.

After World War One ended he started the first peacetime game at Highbury against Newcastle as captain, a role he undertook for the 1919/20 season taking over from long serving skipper Percy Sands. His final appearance, at the age of 39 years and 308 days, in March 1922, led to him retiring from playing as the oldest man to have appeared for the club. Subsequent years have seen him dropping to being the fourth oldest behind Jock Rutherford, Jens Lehmann and John Lukic.

Upon leaving the playing field he became reserve team manager, and in time became a fully incorporated member of the Herbert Chapman boot room backroom staff, so much so that he was made caretaker manager of the side after Chapman’s premature death in 1934, leading the first team to the second of a treble of league championship titles.

The death of Herbert Chapman came as a great shock to everyone at the club, and the board had to act quickly to replace him, as the team were competing for a second successive league title. The man they chose knew the club inside out, having been there for close to 30 years, and had a pedigree of success with the reserve team, having guided them to five London Combination titles and two London FA Challenge Cup successes. Shaw’s task in taking over from Chapman was no mean feat, as the players were visibly affected by the death of their mentor, with one draw and three defeats in their next four league games. However, they soon recovered and went on to retain the league title.

Joe was personally close to the Chapmans and after Herbert’s death processed, together with his widow, the probate for Chapman’s will. From the highlight of winning the League Shaw, who did not enjoy the limelight, was happy to return to managing the reserves until the outbreak of World War Two. Effectively Tom Whittaker and Shaw, with the title of Assistant Manager, looked after the football playing side and new manager George Allison was in charge of all other matters for the rest of the 1930s. The Second World War saw his reserve team disbanded, as they literally had nowhere to play.

He worked outside of football until 1944, when he joined Chelsea as reserve-team manager before returning to Highbury as Tom Whittaker brought him back as his assistant in 1947 following a brief stint at Chelsea during the Second World War, and he remained at the club until 1956.

Despite Chapman’s demise the trophies had kept on coming. This was in no small part down to the management team that Chapman had meticulously put together. One overlooked aspect of Chapman’s reign was the setting up of this ‘boot room’ consisting of himself, Tom Whittaker, George Allison and Joe Shaw. This off-field team construction was the major reason the club was able to remain at the top of English football for so long after his premature demise.

This consummate team man retired in May 1956 at the sprightly age of 74, having spent 41 of the previous 49 years at Arsenal, and quietly but effectively contributed to seven League titles and three FA Cup final wins. Joe Shaw died on 22 September 1963 at Ripon, Yorkshire aged 81. 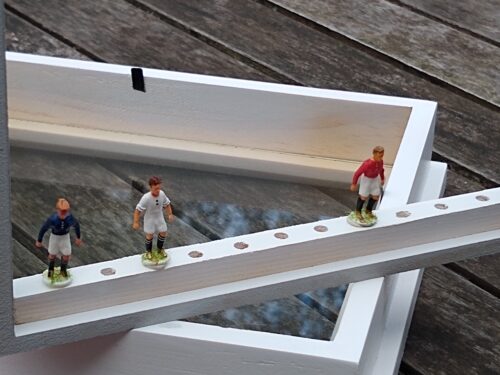 Joe Shaw together with Hugh MacDonald and Tim Coleman