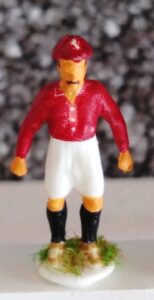 The players chosen are those who interested me while writing a number of books on the Arsenal in the Woolwich era. Some are not necessarily those who were the best players, and it could easily be argued that there were many better full backs than my final full back.

But for me, it had to be ‘Joe’ Murrell owing to the simple fact that he was a Kent cricket player, indeed the only man throughout the 1886-1913 Woolwich era to have played for both Arsenal FC and Kent CCC first teams. Earlier there had been Edwin Leaney who kept wicket for Kent in 1892 and was goalkeeper for the Royal Arsenal FC reserves during 1890 – 1891. And later Wally Hardinge was also a Kent man but he did not appear for Woolwich Arsenal until the club had moved to Highbury.

A high calibre cricketer Murrell appeared on the Manor Ground in the Boer War era in half a dozen League matches, becoming the 135th player to don the red shirt. Born on 19 November 1879 in Hounslow, Middlesex his military family frequently moved around Britain but eventually settled in Charlton. As a youngster he often represented Royal Arsenal (RACS) in athletics, leading to him being seen locally as a renowned swift runner. A scientific instrument maker Murrell played football for junior sides, St Thomas Charlton and Plumstead Albion, and turned out with local cricket side Old Charlton.

He came to the forefront of the club’s attention as a teenager on 26 February 1898 whilst at Plumstead Albion representing the Woolwich District League against the Arsenal Reserves at the Manor Ground. The League side won 3-1, eclipsing the Reserves quite easily. In April Plumstead Albion won the Woolwich District League and the local press specifically marked him out as one to watch:

“Murrell, a youth who as a lad was very speedy has developed into a good outside left, and should be heard of in better company before he is much older.” Woolwich Gazette 29 April 1898

In the summer of 1898 he earned an elevation into better company and joined Woolwich Arsenal, making his first appearance for the reserves in late September at Leigh Town in Essex. For the forthcoming 1898/99 season Murrell was a regular for the reserves in many positions, mainly as a forward, but also as a half back and full back.

Highly thought of by Kent CCC he was placed into the Tonbridge CC Nursery set up to provide a stream of colts for the Kent first team. This appears to be a similar set up to the one Arsenal employed with Margate as a feeder club in the 1930s. Joe was given his Kent debut on 26 June 1899 against Nottinghamshire. 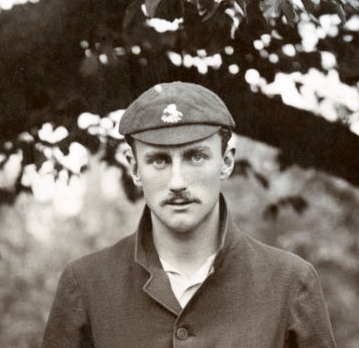 However his chances of further games for either the football or County side was somewhat stymied. At Arsenal he was kept out the first team by the burgeoning full back partnership of Duncan McNichol and Jimmy Jackson. And he was in a similar situation at Kent behind Fred Huish, as Huish was of such quality that he is seen as first in the line of great Kentish keepers followed by Leslie Ames, Godfrey Evan and Alan Knott.

Murrell also had the misfortune to be at the club around the time of the Boer War. While this conflict was a boon for the military arms making town, it was paradoxically almost the end of the football club, as the sheer amount of overtime that the supporters from the Ordnance factory had to work ensured they could not attend matches. Consequently the crowds dwindled to the lowest of the club’s period in Woolwich. Indeed so serious was the lack of turnstile money coming into the club’s coffers that were it not for the benevolence of local businessman George Leavey and his very large pockets full of money, it is likely the club would have folded just after Joe’s first team appearances.

In the 1899/1900 season he appeared mainly for Clapton Orient in the London League and occasionally in the Arsenal reserves, prior to the call up to the first team as cover for the aforementioned full backs, who were indisposed by injury. His six first team competitive games were played at both left and right full back near the end of the campaign, in which the reds finished eighth. The six consecutive games encapsulated the team’s fortunes, as the two homes games were both won without conceding a goal and the four away matches were all lost.

“I fancy too that Murrell was being watched critically. There are some who cannot see anything good in “local talent”. Yet there can be little room for them to moan at Murrell’s show so far. I watched him very carefully and do not find that there is much lacking either in safe kicking, stopping his man, judgement in placing, or power, or even the strong point made by some as to physique is not so much lacking as his boyish appearance would have us think. I have no fear at present as to the wisdom of Mr Bradshaw’s move in the direction of Harry Murrell being anything but a good one” Woolwich Gazette 20 April 1900

A few months after these Arsenal first team games he kept wicket for Kent at Blackheath helping them beat Somerset while taking five catches, his best performance for the White Horse County. Despite Harry Bradshaw wishing him to stay and Woolwich Arsenal announcing he was being retained for the next season, Murrell made the decision to concentrate on one sport and, having picked cricket, joined the MCC ground staff at Lords in the autumn of 1900. Regarding football he continued intermittently at Clapton Orient for another season, playing well enough to be picked to appear for Middlesex in a representative football match against Surrey in March 1901.

He played 27 times for Kent, but only six of these were in his preferred position as wicketkeeper, and when not behind the stumps he was used as a bowler, who could be an occasional hard hitting batsman. Whilst Murrell batted right handed, he was a left-handed bowler and left footed whilst on the football field. Murrell eventually moved to Middlesex, and just after he left Kent, the county went onto win four County championships between 1906 and 1913, marking their first ‘golden age’.

Joe was at Middlesex between 1906 and 1926 in well over 300 matches and won the championship in 1920 and 1921 as their wicketkeeper. However like most of his generation he lost a number of seasons of his sport to World War One, and quickly after the start of the conflagration he was seconded by the government to work in a torpedo factory.

Murrell was highly respected on the county circuit playing in 378 first class matches over his career for Kent, MCC and Middlesex, and also served Middlesex as their scorer for many years after retiring from playing. Renowned as a musician it was said he could have earned a living as a pianist if he hadn’t been a cricketer, the only person near his level of accomplishment on the county scene being fellow ex-Woolwich Arsenal and Kent player Hardinge. Joe Murrell remained living in Kent, and died on 15 August 1952 at West Wickham.

Joe Murrell with the rest of the team so far: Hugh McDonald, Joe Shaw and Tim Coleman.