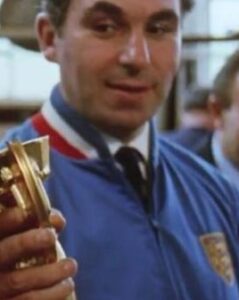 The Arsenal medical adviser for much of the 1960s, Alan Bass worked at Arsenal with managers George Swindin, Billy Wright, and Bertie Mee.

Born on 22 March 1929 this pioneer of modern sporting medicine was the head of the Arsenal medical team and was also employed as the England international team’s doctor a few years into his stint at Highbury.

He joined Arsenal during the summer of 1960 which saw the Billy Milne retire as trainer and was replaced by Bertie Mee under the new role of physiotherapist. Bass was brought on board as the Medical Advisor to replace Guy Pepper who had also retired. Mee and Bass had previously worked together at a rehabilitation centre run by the National Health Service in Camden.

One of his first tasks was to tend for Mel Charles’ damaged cartilage and one of his final was to get the players ready for an end of decade League Cup final.

Bass was the doctor for England’s 1966 World Cup-winning team, who sat next to manager Alf Ramsey as England beat West Germany 4-2. Three days before the final, Bobby Moore was struck down with tonsillitis, but early diagnoses by Dr Bass resolved the potential catastrophe of our captain not being fit for the final. Bass was also England’s doctor at the 1970 World Cup

A Harley Street consultant he was on FIFA and Olympic medical committees. Also helped film star Sir Sean Connery and, not unlike Tom Whittaker in the 1930s, many sportsmen over a whole range of sports: cricket, athletics, golf, tennis, skiing and so on.