The players I have chosen for the Subbuteo side are those who interested me while writing a number of books on The Arsenal in the Woolwich era. Some are not necessarily those who were the best players, but my choice of team skipper most definitely was the fulcrum of the team for many seasons.

Percy Sands, the 165th player to don the red shirt of Arsenal, was a defender of rare talent, and record appearance holder at the time, who was very much a crowd favourite at Plumstead. He joined as an amateur when the club were a prominent Second Division outfit, and in his first season was to see the club promoted to the First Division. After a long career with the Gunners, he left with the club having made the move to Highbury.

Born in Norwood, Surrey on 9 September 1881, the Sands family soon moved to Plumstead and Percy gained a reputation whilst playing football for Purrett Road School, just off Plumstead High Street. While there he was picked for the Woolwich District Schools and South London Schools. He even made an appearance against Woolwich Arsenal FC Juveniles on 18 November 1893 for the Woolwich District Schools. After leaving school he trained as a PE teacher at St Pauls Training College in Cheltenham. While in the west country he appeared for both his training college and for Cheltenham Town.

He signed for the club as an amateur from Maze Hill Wanderers in late December 1902, was blooded in the reserves and made his Woolwich Arsenal first class debut at the start of the 1903/04 as a centre back. Sands hit the ground running once in the first team, as they won the first seven league games he played. Percy was only in the team as William Bannister a big purchase England international centre back picked up Smallpox and rheumatism in the summer of 1903 and was unable to play. Though, such was his level of performance, Sands made himself indispensable and could not be left out even when Bannister was fit again. Indeed he caught the eye of England’s selectors and was chosen, alongside colleagues ‘Tim’ Coleman and Bill Linward for the South v North England trial match in January 1904 played on the Manor Gound. 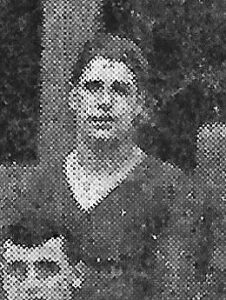 A Gold medal for promotion was awarded to 14 players by the directors in September 1904. Percy as one of the key members of the side received his reward and was credited with lifting the whole level of defending for the promotion season team of 1903/04. Woolwich Arsenal were elevated amid fireworks and a pitch invasion, which managed to break much of the fencing surrounding the pitch, after a draw in the final home match of the season with Burslem Port Vale in April 1904.

In January 1905 Sands was again chosen for the England International trial match, this time  alongside colleagues ‘Tim’ Coleman and Charlie Satterthwaite, and like in the previous one none of the Plumstead based players were picked for the national side after this trial. The ever-consistent Sands never did get an international call up from England, though he did captain the Football League in October 1905.

De facto captain during the 1905/06 season after John Dick was not in the team, he was ever present for the FA Cup run to the semi final. However when officially captain next season, he was controversially left out of the side, for Tommy Hynds, by Phil Kelso for the majority of the second cup run. The many letters to the Kentish Independent on the matter expressed amazement by Woolwich fans at the decision. 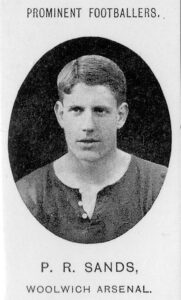 Sands was given a clerical job at the club by Phil Kelso, but the FA insisted that he had to rescind his amateur status and sign as a professional if he wanted to get paid. Consequently he did sign in August 1906, and despite being a professional footballer he still continued to work as a teacher.

“By the by, it is stated that Percy Sands, the young schoolmaster and the Arsenal captain, has turned professional. This will not affect his popularity with the crowd, and, after all, he can always return to his scholastic duties when the heavy hand of time compels him to relinquish active participation in the winter game” Daily Mirror 1 September 1906.

The 1906/07 campaign began as nature mocked the notion of the ‘winter game’, with the season starting the very same day as the above Daily Mirror comment, in farcically hot conditions. A heat wave caused havoc with the Gunners’ first league opponents, Manchester City. This match saw temperatures of 91°F (33°C) in the shade and 125°F (52°C) in the sun, as five of the City side did not finish the game on the pitch, allowing the Sands led Arsenal side an easy win.

Percy held the role of captain until the First World War, the nine seasons being the longest for any Arsenal player until Tony Adams’ marathon time as skipper. One is struck how similar they appear on-field from reports. Here are some of the epithets about Percy – single minded, solid, dependable, long serving, vigorous tackler, tireless, consistent, perceptive, thick of the fray, hard knocks given and taken, inspirational as leader, popular with the crowd, heart and soul of the team. All were said about Tony many decades later. 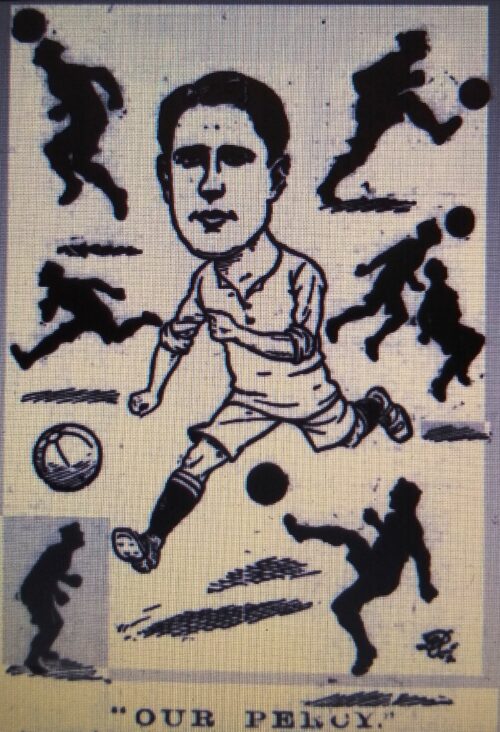 Kentish Independent Cartoon of Percy from 1909

His reign included him being the first captain to lead the team to the top of the league in 1906, but a poorly timed wedding, to the daughter of a local vicar, meant he missed one of the three games when Woolwich Arsenal sat atop English football. He was married on 13 Oct 1906 with Arsenal top of the league!!! Can you imagine the media nonsense if this were to occur today?

“Percy Sands has for years been the idol of the Woolwich crowd… He has filled the position of centre-half back more times than any other player operating in southern circles, and whilst he may not always strike one as the sort of individual one cares to rub shoulders with in a fair charge, Sands has never been known to play anything but a sportsmanlike game.” Star Green’un 13 November 1909

He is the only captain to be in charge of an Arsenal team to be relegated, but also he was the first skipper to walk out onto the Highbury pitch with his team, both this high and low occurring in a few months during 1913. His 350 Arsenal games ensured he held the appearance record for a number of years, from April 1915 to March 1931, when Alf Baker overtook him. It should be remembered that his record total may well have been much higher as, though falling down the centre half pecking order at the latter stages of his career, he lost a full four seasons of his football career to the war. 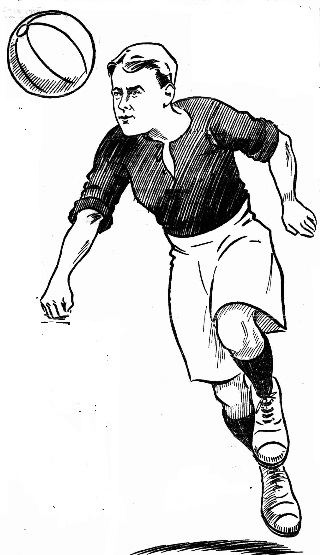 Kentish Independent Cartoon of Sands from 1904

Playing 16 times for Arsenal during World War One, he also guested for Bradford City as he was located in Yorkshire while serving in the Royal Army Medical Corps. Enlisting with the 2nd London Sanitary Company in November 1915, Sands found himself overseas in Italy by June 1917 and was demobbed in early 1919 having attained the rank of Sergeant-Major.

After 17 years he left the Gunners for Southend United in May 1919, remaining at the seaside team for a season before taking up officiating. During the summer of 1924 he became the trainer of Wimbledon FC but this appointment did not stop his refereeing. After his football career ended he continued teaching until retirement, and died on 28 December 1965 in Woking, Surrey. 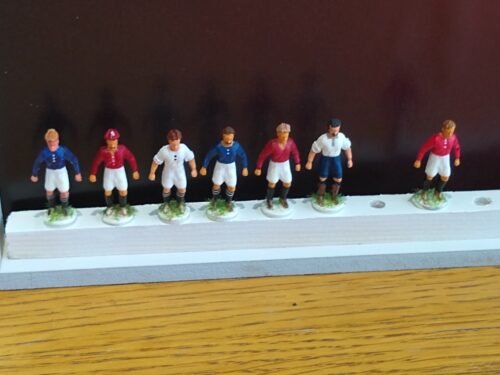