Why did Tottenham poll so few votes in 1919?

If you’re not already aware, following the end of World War One the members of the Football League decided to increase the size of both the First Division and Second Division by two teams. At a meeting held on 10 March 1919, Chelsea were unanimously elected back into the top flight as it was felt that they had been unjustly relegated due to an incident of match fixing between Liverpool and Manchester United players.

The other place was contested between Arsenal, Barnsley, Birmingham, Hull City, Nottingham Forest, Tottenham Hotspur and Wolverhampton Wanderers. A vote was held in which all of the incumbent members of the Football League had one vote, along with John McKenna, president of the league. This was the same method that had been used each time the top division had been extended in the past, the only difference being that, previously, each member had two votes as two teams were elected.

In past elections, the two teams that had been relegated to the Second Division the previous season were both elected back into the First Division. This time, however, it didn’t happen. Tottenham had been relegated at the end of 1914-15 after which the Football League had closed down due to the war. For some reason, they were not looked upon as favourably as The Arsenal who polled 18 votes to Tottenham’s eight. Many years later it was, without foundation, implied that The Arsenal chairman Sir Henry Norris had bribed or coerced other club chairmen to vote for The Arsenal rather than Tottenham.

Over the past few years we’ve written about this meeting and the events leading up to it which have been incorrectly recorded, and then given the true account. We’ve also written an article that shows that Tottenham were not particularly popular with the members of the Football League and the Southern League which may have gone some way to explaining why they polled so few votes in 1919. We have now come across another possible reason for their lack of support amongst the Football League teams based in the Midlands and the North of England.

The Manchester Evening Chronicle gave an indication of this two days before the meeting:

Then, two days after the meeting, they explained further: 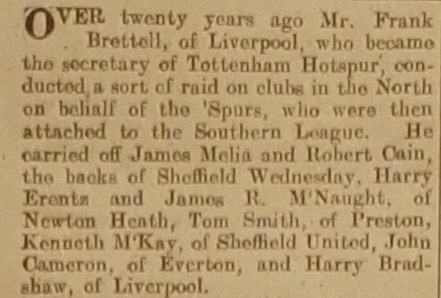 Also, there was no maximum wage in either league at the time.

N.B. By 1919, Northwich Victoria and Gainsborough Trinity had left the Football League

It’s not hard to see why the Football League teams were not happy with this, having their prized assets taken from them with no compensation paid which they could use to replace them.

As we have seen before, Henry Norris enlisted the help of Athletic News editor Jimmy Catton to help with Arsenal’s election campaign. Why did he do this? The Athletic News was based in the North of England and from the ephemera that Catton collected we know that he was incredibly close and influential with the Northern teams. At the time of the election, teams from the North and Midlands comprised 85% of the membership of the Football League. It’s not beyond the realms of fantasy to imagine that Catton spoke to the chairmen of these teams and reminded them of what Tottenham had done 20 years previously, especially as the Manchester Evening Chronicle specifically mentioned it.

And on top of this, Tottenham’s devious actions played a major part in the introduction of the maximum wage for footballers which restricted their earnings for almost 60 years. It’s no wonder that they were so unpopular.

Finally, for the historians who crave detail, it wasn’t until May 1910 that the authorities in charge of the Football League and Scottish League came to a mutual agreement with the Southern League that the transfer of players between clubs in these leagues could be subject to a fee if the selling club felt it warranted one.

We’ve written a number of books covering Arsenal’s history, feel free to take a look and, if you really fancy it, purchase one or more of them.

Royal Arsenal – Champions of the South

We’ve Only Got One Song – Arsenal Terrace Songs & Chants