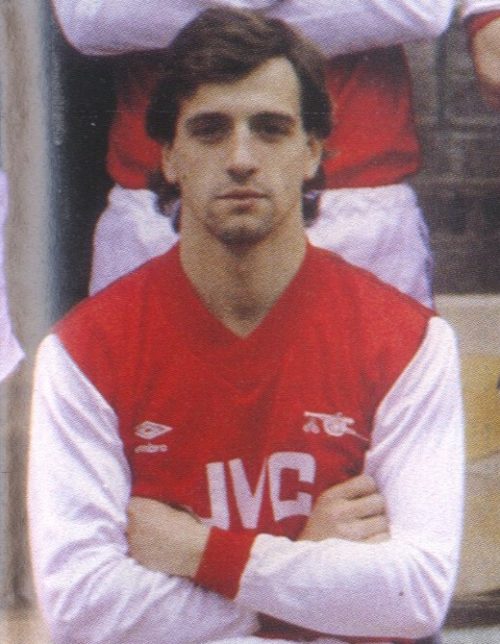 The 600th player in the first team, this popular reserve spent seven years at Arsenal before moving to Crystal Palace and then a number of coaching roles.

Born on 24 June 1962 in Bethnal Green, Brian “Spadge” Sparrow joined Arsenal as a schoolboy in May 1977. He made an immediate impact, scoring both goals on his debut in a 2-1 against Gillingham in the South East Counties League.

Sparrow quickly became a reserve playing as a winger, but was soon converted to left back. Generally appearing in the second string he was a part of the first team squad between 1980-84 and was terribly unlucky to have someone of the quality of Kenny Sansom ahead of him in the pecking order.

Consequently to gain playing time he was loaned out to Wimbledon in 1982-83; Millwall (with George Graham and Theo Foley at the Den) and Gillingham in 1983-84. While at Wimbledon he gained a Fourth Division winners’ medal making 17 appearance as the Dons won the title.

Brian made his Arsenal first team competitive debut on 31 March 1984 at Coventry and then played during the next weekend at Highbury on 7 April. Arsenal won both these games easily 4-1 and 3-1 respectively, during a nine game unbeaten streak ensuring the team reached 6th in the league.

In the reserves he played 177 games (plus two as substitute) during his time at Highbury, and signed off with a Football Combination winners medal as part of the impressive team of 1983-84.

However with no chance of usurping England international Sansom he was transferred to Crystal Palace in the summer of 1984 by Don Howe. At Selhurst Park he made a total of 73 first team appearances, before moving to non-league Enfield in 1987. He helped Enfield to win the FA Trophy Final in 1988 playing as left back.

A move to Sussex followed in July 1990 as he joined non-league Crawley. Sparrow was made player-manager in May 1991 and while here his playing career was effectively ended with knee ligament damage. During the 1991-92 season he took Crawley into the 3rd round of the FA Cup, and despite losing 5-0 to Brighton in January 1992 – this was the club’s most successful performance in this competition up to that date.

A few weeks after this achievement he was head hunted and moved to manage Wimbledon reserves, and in 1994 went onto the coaching staff of Crystal Palace with Steve Coppell. A brief interlude saw him return to Crawley as manager in late 1996 for a very short time, in fact he lasted only two weeks. At Crystal Palace he was employed as youth coach, but was made caretaker manager of the first team in May 1996, taking charge of the final few games of the 1997/98 season as the Eagles bowed out of the Premiership. Soon after he went to work for Brentford’s coaching staff, playing his part in the club’s Division Three title win in May 1999. After two seasons at Griffin Park he returned as first team Crystal Palace coach in 2000.

Brian also managed both Lingfield and Croydon, and had a short spell at Shenzhen in China in 2012.

Brian Sparrow died of a heart attack on 6 December 2019.