In this two part article we look at the events surrounding Arsenal’s election to the First Division in 1919 and bust a number of myths that have resulted in the vilification of one of the club’s saviours.

“And the winner is Arsenal!”

…announced Football League President ’Honest’ John McKenna to the packed room at the Grand Hotel in Manchester in the late afternoon of 10 March 1919.

John McKenna, the long time President of the Football League

This moment in time was the means by which Arsenal Football Club began their long, and currently un-ending, stint in the top flight of the English League. In this article we will give a background to the events, and then comment on the machinations that led to the resounding vote in favour of the Gunners over, among other teams, Tottenham.

The series of events began with the UK declaring war on Germany on 4 August 1914, and entering the First World War. At the time it was believed that the war would be over by Christmas, and the English Football Association met on 1 September 1914 agreeing that football should continue within England for the 1914-15 season.

However, the war did not end as quickly as first thought but continued unabated, with the consequence that football was criticised for its apparent stay at home to play attitude rather than force players to join up and serve their country. Throughout the season, and particularly from Christmas 1914 onwards, attendances dropped as supporters and most footballers enlisted to fight for their country.

At the end of the 1914-15 season, Chelsea and Tottenham finished in the bottom two places of the First Division of the Football League whilst Derby and Preston finished in the top two places in the Second Division. At any other time these teams would have simply swapped places, it being two up and two down then. Arsenal had finished 6th in Division Two.

However, two developments complicated the issues. The first of which was a necessity due to the country’s situation and the second was skulduggery.

The English Football Association suspended first class football for the duration of the war. Regional leagues were organised with Arsenal and Tottenham playing in the London Combination, and indeed, Spurs playing at Highbury for a few wartime years.

Secondly, it became apparent that the game between Manchester United and Liverpool on 2 April 1915 had been fixed in United’s favour. The upshot was that Manchester United avoided relegation by one point thus denying Chelsea a place in the First Division the following season. Tottenham would have been relegated irrespective of the outcome of the rigged game.

However, much more important matters of state overtook the sporting world and thoughts of match fixing, promotion and relegation were then put on hold for almost four years.

The First World War came to an end on 11 November 1918, and by this time the 1918-19 season had started so the regional leagues were played out to a conclusion as part of the transition back to peacetime football. The League was to restart in the 1919-20 season, and the football authorities had to deal with the left over items from 1915.

Thoughts turned to how football would be organised. London clubs considered continuing with the London Combination, there was also talk of the Southern League amalgamating with the Football League to create a truly national League, and Blackpool proposed an extension of the First Division to 22 teams.

The Blackpool idea was reported approvingly in the Athletic News, a Manchester based weekly sports paper, which was the most influential football publication in the country, on 13 January 1919. In this report Athletic News introduced a new twist, namely an “election”, and that Chelsea, Tottenham and Arsenal would have an interest in it.

Shortly after this date Chelsea chairman Claude Kirby wrote to the Football League Management Committee requesting that Chelsea be re-instated to the First Division for the 1919-20 season, due to the exceptional circumstances of the fixed Manchester United v Liverpool game.

By the end of January 1919 it was clear that the Football League would be holding a meeting to decide on the structure of the League. The meeting was scheduled for 10 March 1919, but the exact format of the meeting was unknown as a number of different proposals were eventually tabled during the meeting.

On 31 January 1919, a London based sports paper, The Sportsman, noted that Tottenham had sent letters to all the other League clubs putting forward their arguments as to why they should be elected to the First Division, highlighting that Tottenham must have realised that there was a very real chance of a vote at the forthcoming meeting.

At this point, the Athletic News set their stall out by supporting Arsenal’s claim to a place in the top flight. On 3 February 1919 the paper responded to Tottenham’s claim very negatively and put forward Arsenal’s case. They also intimated that Chelsea, Preston and Derby starting the 1919-20 season in the First Division was a foregone conclusion.

The paper noted that Arsenal were borne from a munitions factory, which had played a big part in the war, and had been in the vanguard of the Football League expansion into the South, and indeed were the sole London team for many years. Here they cleverly wrapped up Arsenal’s implied patriotism with their stoic long term support for the Football League.

Tottenham on the other hand had tried to utilise the war in their address claiming their poor performance in 1914-15 was due to enlistments, a feeble notion which was taken apart by the Athletic News who did not take kindly to Spurs using the War as an excuse. Additionally the fact that they did not enter the Football League until a few years prior to the war and had preferred to remain in the rival Southern League was used as a further reason to promote The Arsenal.

At the meeting a number of proposals were put forward, and discussed. Everton advanced that the League should not be expanded but that Chelsea should stay in the First Division and Manchester United be relegated. This was not considered as it was the players of Liverpool and Manchester United that had fixed the game and not the officials of either club. West Bromwich Albion proposed that the First Division be expanded to 21 teams and that Chelsea should be elected as the 21st team. This was also rejected.

It was finally agreed that both divisions would be expanded to 22 teams; Preston and Derby would be promoted and it was agreed unanimously that Chelsea should be elected to the First Division.

An open discussion then took place and the vote for the final place in the First Division was held in which Arsenal, with 18 votes, were elected. The results are shown in the minutes of the meeting below: 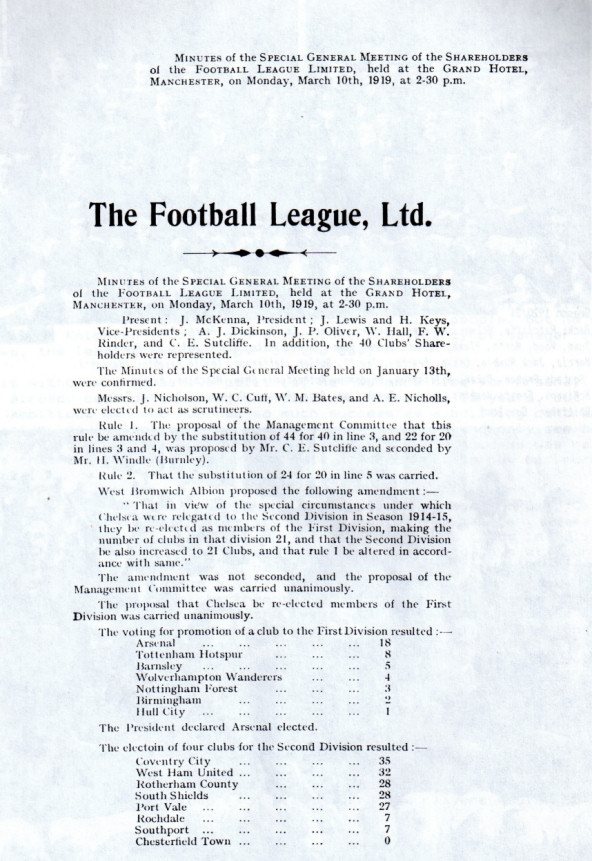 Football League minute book showing the result of the vote

The Athletic News reported that the Tottenham representative at the meeting stated: “We shall take our defeat like sportsmen!” which is hardly the language of an aggrieved man.

Part two tomorrow: Norris had virtually nothing to do with the election!