Here are the whys and wherefores.

The 1914-15 football season had started under a cloud. Britain had declared war on Germany a month before the season started, and hostilities would escalate into what became World War One. At the start of the season, the war was expected to be over by Christmas. For this reason, the football authorities decided to continue with the League and FA Cup competitions.

For one team, though, the outbreak of war saw them fold. Woolwich FC had been formed following Woolwich Arsenal’s move to Highbury in 1913. They rented the Manor Ground from Woolwich Arsenal and played the 1913-14 season in the Kent League and FA Amateur Cup. In late August 1914 the directors of the club decided that it would not be possible to continue and they disappeared forever.

The Manor Ground would eventually by bought by the Government and was swallowed up by the Royal Arsenal, eventually becoming the site of a fuse factory. Quite poignant and ironic that it should become part of the organisation that had been the employer of the club’s founders 28 years earlier.

Having narrowly missed promotion in 1913-14 The Arsenal, as they had become in 1914, were hopeful of making a quick return to the First Division. After nine games they topped the table, and Harry King was terrorising opposition defences with ten goals. However, an inconsistent run saw them enter the New Year down in fourth place. A run of four wins brought them back into contention but, once again, a lack of consistency saw promotion become unattainable following a 0-1 defeat at Hull on 2 April, consigning the Gunners to another season in the Second Division.

Another concern for the directors was the falling attendances due to men signing up to fight in the war and a degree of ill-feeling towards the game continuing with conflict raging. Only two home games attracted crowds of more than 20,000 whereas 14 games had passed this mark the previous season. Prior to the last game of the season it was announced that gate receipts were down £5,000 from the previous season’s £13,000. With the high costs of building Highbury and the War looking like it was going to go on for a while, financially things didn’t look good.

On 13 April, with two games remaining, Arsenal parted company with manager George Morrell by mutual consent. Having been told that the staff would not be retained at the end of the season due to the war, he decided to leave early and he returned to Scotland to eventually manage Third Lanark.

Reserve team coach James “Punch” McEwen was put in charge of team affairs for the remaining fixtures. The first game resulted in a 0-3 drubbing by second place Preston, which guaranteed them promotion. 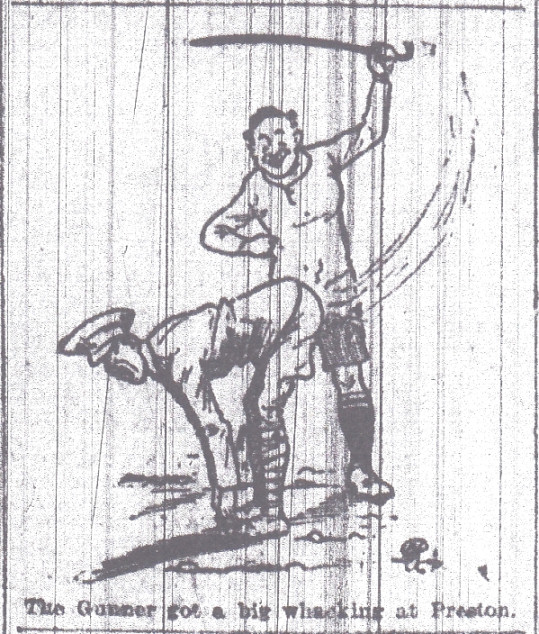 On 24 April 1915, The Arsenal played host to lowly Nottingham Forest. A crowd of about 10,000 gathered at Highbury without realising they were about to watch a historic game. And boy were they in for a treat. And so are you – here is the programme for the game for you to read. Click on the picture of the cover of the programme to read it. 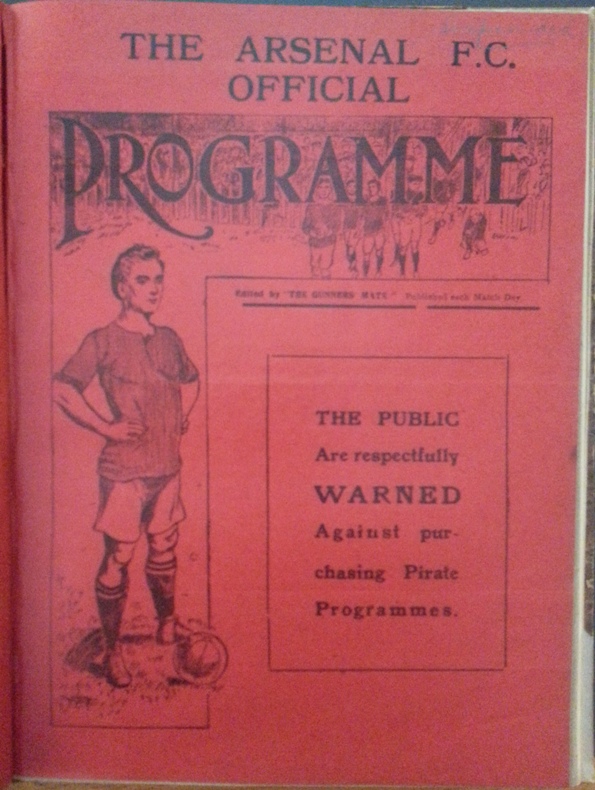 Caretaker manager McEwen made a number of changes for this final game. Captain Percy Sands was moved into the defence from his usual midfield position, the midfield itself was completely changed, Jock Rutherford returned to the right wing but the biggest shock was left-back Bob Benson appearing at centre-forward! This wasn’t too much of a shock for fans of the reserve team, though, as this experimental forward line had been trialled against Boscombe five days earlier with Benson scoring twice. 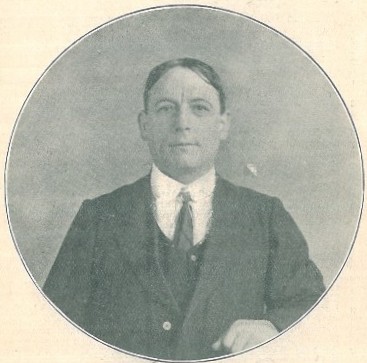 Playing up front for Forest, in his final ever game at this level was former Arsenal favourite Tim Coleman. During a six year spell in Woolwich he scored 84 goals in 196 games, making him Arsenal’s record goalscorer until Jimmy Brain overtook him in 1927. At centre-half was Joe Mercer whose son, also called Joe, would go on to become an Arsenal legend 30 years later.

Arsenal’s top scorer Harry King opened the scoring, heading home a Charlie Lewis cross after 15 minutes. Shortly after this, Harry Iremonger did well to deny Benson but in the 19th minute he was powerless to prevent the centre-forward scoring who drove home convincingly, having exchanged passes with Jock Rutherford in the build up. It was Iremonger who kept Forest in the game in the opening half with a string of saves. Even when they did get into the Arsenal penalty area their forwards contrived to miss, Coleman mis-kicking when he should have scored.

However, in the second half the floodgates opened.

Shortly after the restart King missed an open goal but made no mistake after 53 minutes when he scored his second after Blyth and Benson had combined with some clever play to set him up. Three minutes later he completed his hat-trick with a fine shot from Rutherford’s cross.

The crowd had only two more minutes to wait before another Rutherford cross was met by Benson who headed his second to make it 5-0. 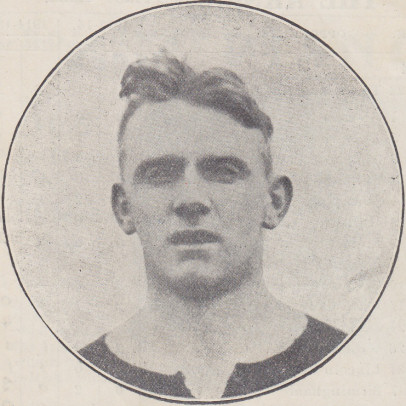 Arsenal were now firmly ensconced in the Forest half, Rutherford giving Tommy Gibson a torrid time and Benson taking pot shots as soon as he got the ball, looking for his hat-trick. Joe Lievesley in the home goal was a virtual spectator.

It wasn’t until five minutes from time that Arsenal registered their sixth goal, which was almost an exact replica of the first with King heading home a Lewis cross.

In the final minute, Jock Rutherford capped a fine display with a splendid individual goal to make it 7-0, scoring the last goal of the season and, what would turn out to be, Arsenal’s last league goal outside the top flight.

This innovative forward line gave Arsenal their biggest win in 11 years but they would never play together again. 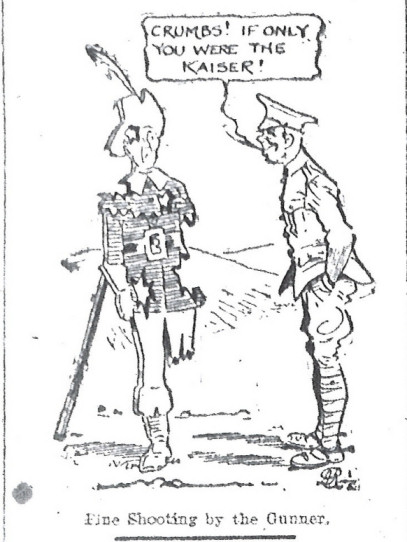 This win left Arsenal in fifth place, which was pretty much guaranteed as Hull would have needed to beat Grimsby 29-0 in their final game to climb above the Gunners. They gave it a go but could only manage 4-1. But then a twist to the story that lasted for 60 years. If you look at the two tables below you will see that The Sportsman showed The Arsenal in fifth place, whilst Athletic News showed them in sixth place. 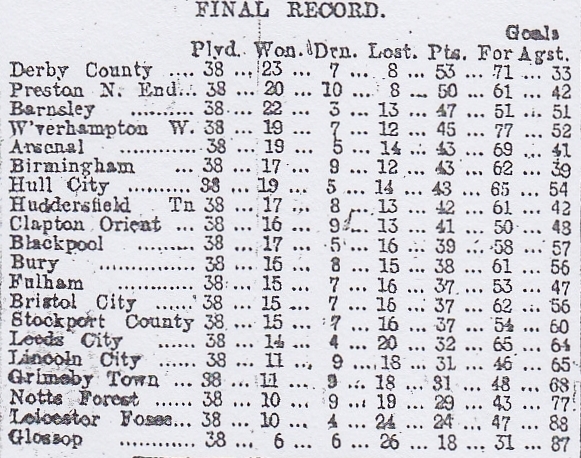 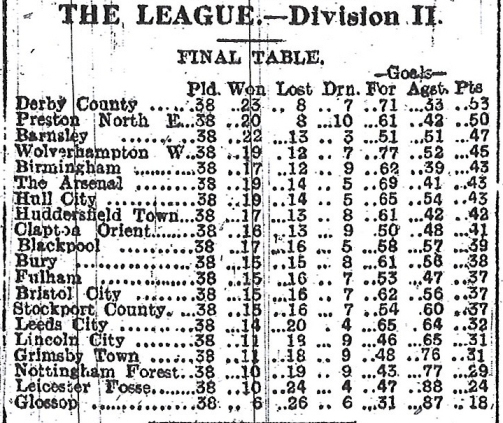 The former is correct as Arsenal’s goal average was 1.68 whilst Birmingham’s was 1.59. For some strange reason the Athletic News table was assumed to be correct and, with the War in on everybody’s mind, it appeared that no one bothered to double check. Arsenal’s league position remained sixth in the records until the 1970s when it was eventually spotted and it was corrected to fifth.

This also proved to be the last senior game played legally under the name The Woolwich Arsenal Football And Athletic Company, Limited. There were two more reserve team games after the Forest game, after which the official name was changed to The Arsenal Football Club, Limited.

At the end of the 1914-15 season the Football Association and Football League closed down for the duration of the War and clubs re-organised themselves into regional competitions.

Joe Lievesley never played for The Arsenal again but the remaining members of the team played for the club during the War and all, except Bob Benson, played after the War; the reason for this being particularly tragic. On 19 February 1916 The Arsenal were at home to Reading in the London Combination. Bob travelled to watch the game with his wife and father-in-law. Once inside the ground he told his wife that he was “going to see the boys”, and returned five minutes later to tell her he had managed to convince John Peters, the club secretary who was in charge of the team that day, to give him a game. His father-in-law suggested he shouldn’t as he had been working long hours in his wartime job at the Royal Arsenal and wasn’t match fit, but Bob ignored him. Tragically, Bob collapsed in the dressing room having left the pitch after 15 minutes of the second half and died about an hour later, the result of a burst blood vessel in one of his lungs.

Finishing outside the top two didn’t prevent The Arsenal’s return to the top flight when football resumed in 1919. In one of the most controversial, but incorrectly reported, events in the club’s history they were elected to the top flight in March 1919, which is detailed in our articles here and here.

Since then they have remained in the top flight, although in the 1920s and 1970s they flirted with relegation a handful of times. The table below shows the seasons when Arsenal came closest to the drop:

1927-28 was an incredibly tight season, Arsenal finished eleven places above relegated Tottenham but only three points separated them. Back then, it wasn’t unusual for one team to complete its fixtures well before its competitors. This was the case this season when Tottenham played their final game on 28 April and Arsenal still had two games to play. At this point, Arsenal were not mathematically safe from relegation, but it did not stop Tottenham accusing the Gunners of throwing their last two games to get the Middlesex club relegated.