During the 1892-93 season the relationship between most of the Royal Arsenal committee and the club’s landlord, George Weaver, began to deteriorate. It culminated in a failed attempt by Weaver and three members of the Royal Arsenal committee to take control of the club. The full story is told in the opening chapter of Woolwich Arsenal – The Club That Changed Football. Towards the end of the season the members of the club voted to vacate the Invicta Ground and move back to the Manor Field, where Royal Arsenal had played between 1888 and 1890.

As the name implies, the Manor Field was just a field and required a considerable amount of work to bring it up to a standard anywhere near approaching that of the Invicta Ground. This work would cost a substantial amount of money so, two years after having rejected the original proposal, the members of the club voted to form a limited company in order to raise funds to develop the Manor Field.

And this is where a name change was forced on the club. It is not possible to form a limited company in the UK with the word “Royal” in the title without special dispensation. This rule was in place in 1893, as it is today. We actually tried to register Royal Arsenal Football Club Limited last year and were refused permission. The name chosen was:

This company was incorporated on 26 April 1893 (company number 38703C) as shown on the certificate of incorporation:

On 28 April 1893 the assets of Royal Arsenal Football Club were transferred to The Woolwich Arsenal Football And Athletic Company, Limited as shown in the prospectus for shares in the limited company.

Or maybe not quite. Some history books tell is the Football League referred to the club as Royal Arsenal as late as 1896. We’ve not seen any positive proof of this but we remain open minded about it. Either way, the club was now known as Woolwich Arsenal.

This name was used throughout the remaining years that Woolwich Arsenal played in Plumstead, as was the name of the limited company.

In 1910, the shareholders of The Woolwich Arsenal Football And Athletic Company Limited voted to put the company into voluntary liquidation, specifically on 18 March. The liquidator confirmed this to the Joint Stock Companies on 25 April 1910 – the final nail in the coffin for the old limited company. 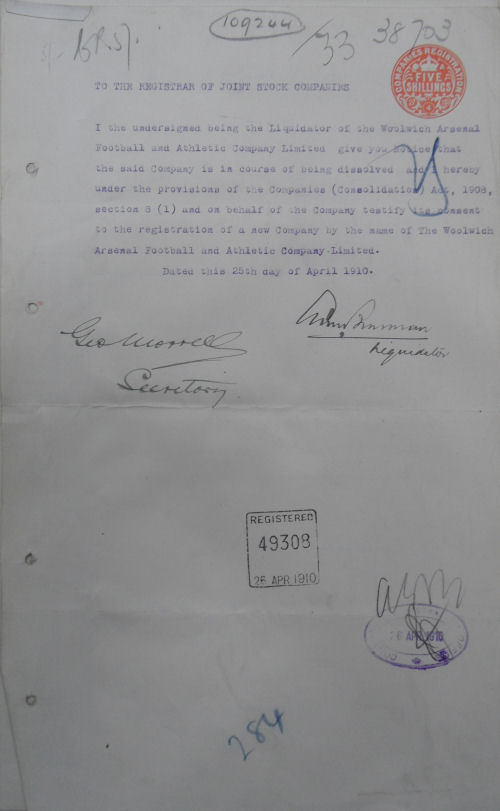 A new company with exactly the same name was incorporated on 26 April 1910. The new company took over the assets of the old company including the football club. This is the company (number 109244) that Henry Norris and William Hall took control of and is still in existence today. Below is the certificate of incorporation of the new company, which was provided by Phil Wall who runs the Angry Of Islington blog which comes highly recommended. 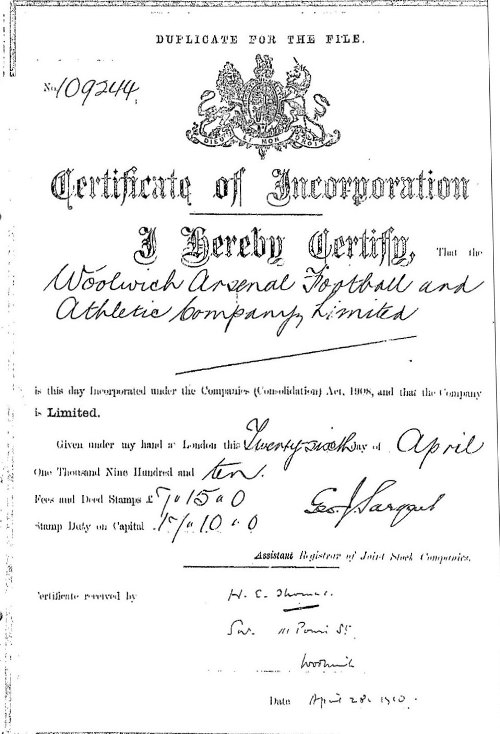 The act of liquidation is long and drawn out. So much so, that the old company was not finally dissolved until February 1911 which meant that, for ten months, there were actually two companies registered with the Board of Trade with exactly the same.

The next two parts will be like trying to keep up with an episode of Soap.