Yesterday we attended the AISA Q&A event, which was organised with a fair degree of expertise.

Tom Watt – an excellent guide to proceedings, who announced himself with a resume of his day so far, which he noted had been particularly good.

He had interviewed and was astounded by Mesut Ozil’s basic humility and decency in the morning.

He had then had to carry out the onerous task of writing a 1,500 word article about “what is wrong with Manchester United” in the afternoon.

He was about to host an evening with Arsenal and journalistic legends. (I don’t use that word lightly)

80s and 90s Arsenal goal scoring star and Sky Sports commentator: Alan Smith, who showed a reserved intelligence and when he allowed himself was very incisive, having a good line in Spurs manager rumours.

Paddy Barclay a gregarious, charismatic and erudite journalist who co-incidentally has just written an excellent biography of The Life and Times of Herbert Chapman who has some sound notions on the game in general and Arsenal in particular. 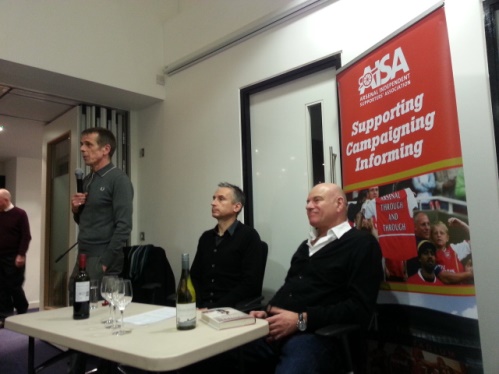 Being a law firm’s meeting rooms which was a surprisingly good idea, bright and airy with superb cake based food.

The talk was broken into two parts, Tom Watt had a list of presumably pre-arranged questions which Alan and Paddy answered and the second part was opened to the floor:

Chapman legacy – Paddy spoke about this feature as it is unsurprisingly central to his recently book.

Loans – Paddy eloquently stated his opposition to the system as it is currently being run, and Alan highlighted how bizarre it was to have been playing for Leicester but being owned by Arsenal, as in a game at Highbury he was greeted by both sets of fans and waved to both from the pitch.

Belgium fans with unmistakable English accents were given some verbals as  Paddy pointed  out it was strange they are coming out of the woodwork, now that Belgium are packed with stars.

The question which got Alan Smith most animated was from my colleague Mr Kelly. “Did you touch it” said Andy of the famous glancing header in 89. Struggling to contain his disbelief at being asked, he assured us he did. Andy’s reply was that he thought he touched it but it would have been funny if Alan said no, as it would really annoy the scousers who would then have been correct in their persistent protests about the goal.

At the end both Paddy and Alan spent a lot of time signing and chatting with the Arsenal support present. Especially popular was both men signing Paddy’s book.

And we had a decent chat with “no 1 gunner”, and phenomenal collector of Arsenal stuff – Keith Martin – to round it off.

Thanks must go to Lois Langton and Paul Matz, and any other AISA member who arranged this entertaining event.

Don’t forget to subscribe to the blog (top right) so that you don’t miss the next part.