In this series we explain when and why the football club now known as Arsenal changed its name.

Having played their first game the members of Dial Square Football Club decided to open up their club to the whole of the Royal Arsenal. Why? Well, probably because working in another part of the factory was a certain Fred Beardsley, and opening up the membership would allow Dial Square access to one of the country’s top goalkeepers. Beardsley had recently moved to Plumstead from Nottingham where he played regularly for Nottingham Forest including their FA Cup semi-final in 1885 against Queen’s Park.

The following cutting from the Woolwich Gazette explains the relaxation of membership for the club. 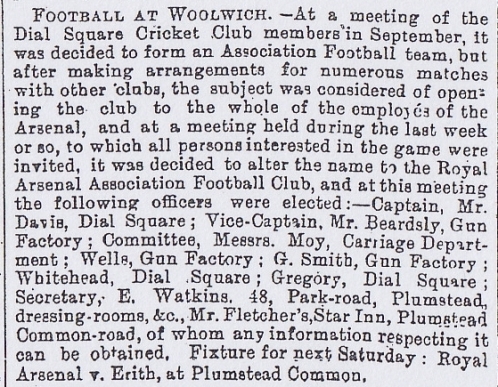 As the club now included men from outside Dial Square, it seemed right that the name should change to fit the new membership.

The following extract comes from an Arsenal programme in 1952 following the publication of Bernard Joy’s “Forward, Arsenal!” It gives an explanation as to the “discussion” that took place to decide the new name. However, bear in mind that this was written 66 years after the event by a man in his 80s and that all the other people involved were no longer around to corroborate the story. There are a couple of inaccuracies in Thompson’s stories and we believe that he may actually have been ‘given’ the story from his older brother who is more likely to have played. 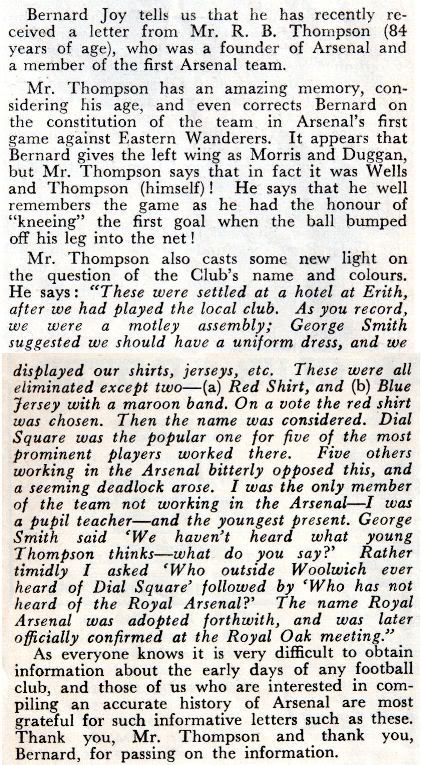 Robert Thompson’s account of the name change recounted in 1952

Thompson was certainly right about how famous the Royal Arsenal was – it attracted skilled men from all over the country looking for work. His account appears to answer a number of questions but there is a problem with the chronology. He states the discussion took place after having played Erith but the first game against Erith was on 8 January 1887, i.e. the day after the newspaper cutting at the top of the page which clearly states that the club was called Royal Arsenal at this point. We are somewhat sceptical about this account but have included it as it gives a good reason for the name change.

The cutting below comes from the Woolwich Gazette after that game and gives the result as Royal Arsenal 6 Erith 1. 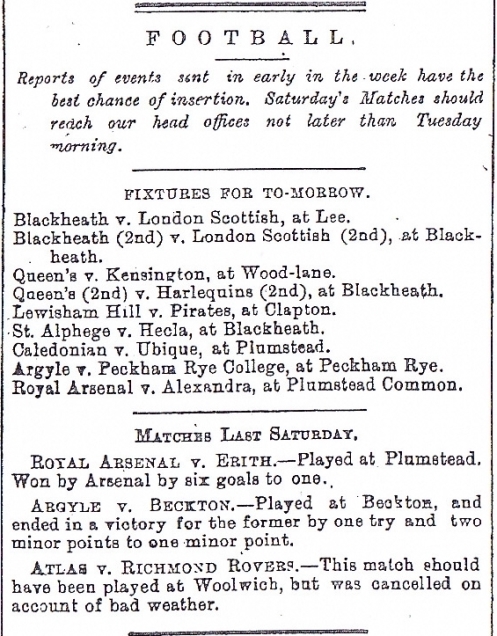 The question that we haven’t been able to answer exactly is when the name Royal Arsenal was adopted. It was obviously sometime between 12 December 1886 and 7 January 1887. The official history of the club says that it was Christmas day but we’re sceptical about this, believing it be a bit of romanticism.

In the first part of this series we showed that Elijah Watkins had placed an advert in The Referee on 2 January 1887 under the name Dial Square. This would have had to be with the editor by the previous Tuesday (i.e. 28 December) which would have been posted the previous day. This, theoretically, narrows the date of the name change to 27 December 1886 and 6 January 1887, which ties up with the report at the top which states “…at a meeting held during the last week or so…”

But there is a further twist to this and is the reason we can  be no more specific that the name was altered between 12 December 1886 and 7 January 1887 is because Fred Beardsley wrote in the Woolwich & District Football Handbook in 1894: “…the Royal Arsenal Football Club came into existence on December 12th, at the Royal Oak, Woolwich.”

Whilst Elijah Watkins in Football Chat 1902 said: “…I am the individual that was the first secretary of that organisation, and have the records by me…” and “In December 1886, a meeting was held at the Royal Oak, New Road, Woolwich, and the name of the club was altered to Royal Arsenal Football Club.”

Sadly, the location of Watkins’ records are unknown so we will continue to use the date range until we come up with some more detailed evidence.

It may be that we have spent so much time re-reading these accounts that we can’t see the wood for the trees. If you have spotted something that we have missed, please leave a comment.

The name Royal Arsenal FC held the club in good stead for another 6 years, but there is a little bit more.

Contrary to popular belief the name was not changed in 1891 when the club turned professional. Many histories state that they were not allowed to use the word “Royal” in the name of a professional football club. This was not true. This booklet, on display in the club’s museum, explaining the rules of the club for 1891-92 clearly states: That the Club shall be called the “Royal Arsenal Football Club.” 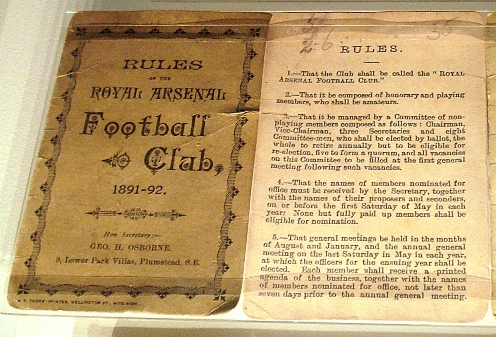 And the following matchday programmes confirm that the name Royal Arsenal was used during 1891-92 and 1892-93. 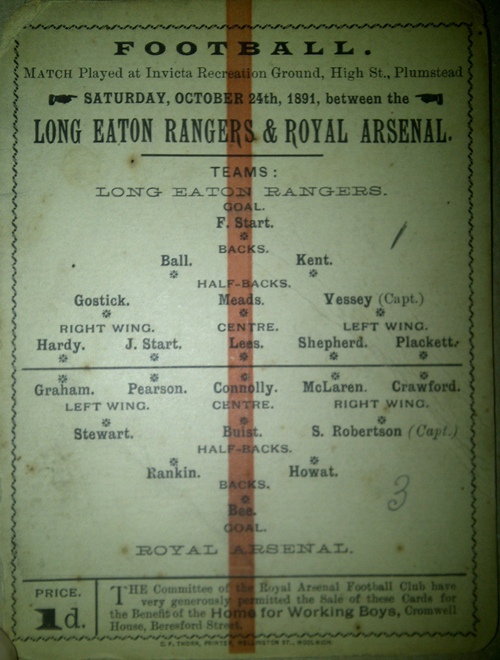 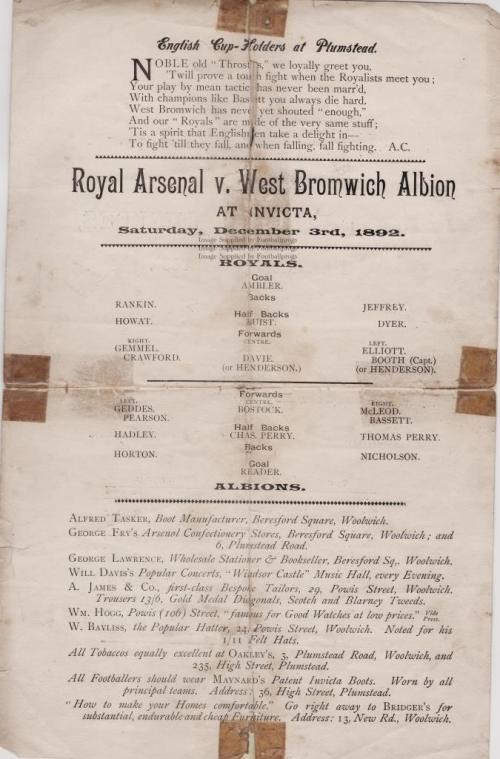 Finally, this report of the half-yearly meeting that took place on 26 January 1893 also refers to the club as The Royal Arsenal Football Club. 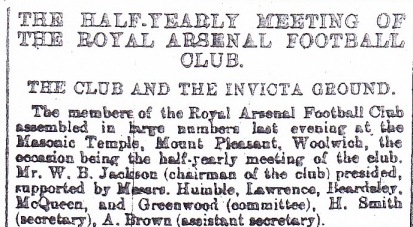 In the next part of the series we move forward to 1893 to explain why a name change was forced upon the club.