This is a three-part article that is probably the most important that we will write. It explains how we found a discrepancy in Arsenal’s early history that snowballed until we realised that much of what has been written about the club before the First World War is inaccurate and incomplete.

This is a long post, but please bear with us as it fully explains how we got to where we are.

It has led us to co-write one book – Woolwich Arsenal: The Club That Changed Football – and we have another currently being written – Royal Arsenal: From The Common To The Manor – which puts the record straight.

It was on 26 September 2010 that I found myself reading an article on Tony Attwood’s blog about Bob Buist. Arsenal folklore tells us that Bob was one of the Royal Arsenal players that was approached by the Derby County management after an FA Cup game on 17 January 1891 and offered professional terms to join the Midlands’ team. This was the catalyst for Royal Arsenal to decide to become the first club South of Birmingham to turn professional, be expelled from the London FA and boycotted by clubs from London and the South. Below are clippings taken from various books about Arsenal’s history. They all say the same thing about Buist.

Here is what the club’s official history by Phil Soar and Martin Tyler says: 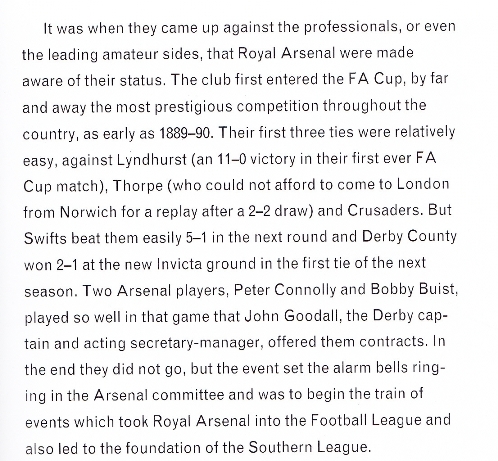 The relatively recent “The First Gunners” by Brian Belton 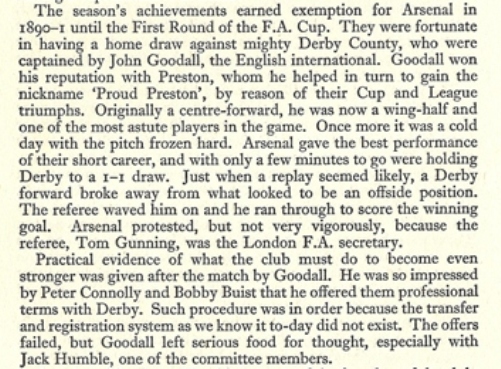 The Woolwich Arsenal handbook from 1914, edited by George Allison

George Allison’s article in Athletic News 7 February 1907 which he credits Arthur Kennedy as his main source. 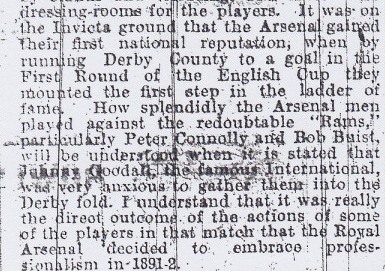 Arthur Kennedy’s article in The Book of Football published on 20 October 1905 which appears to be the original source. Kennedy was the club’s vice-chairman who would go on to become chairman the following season. 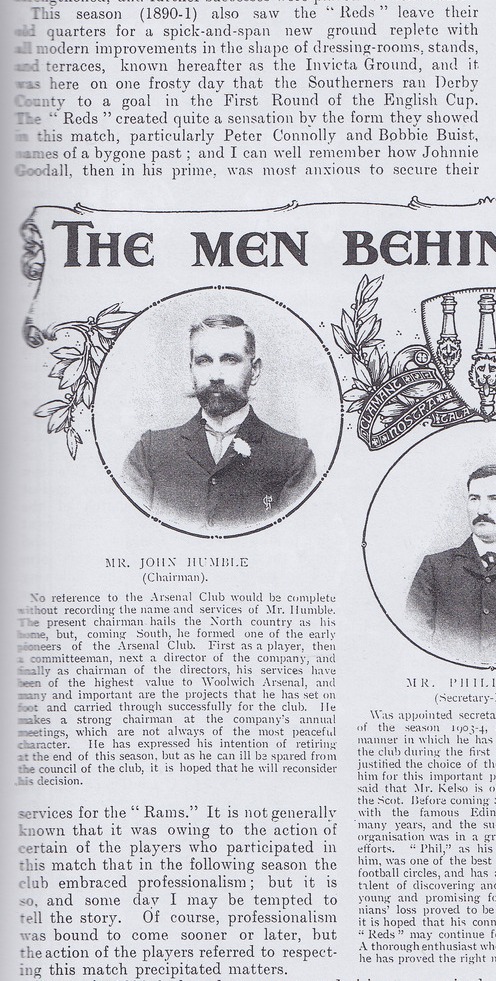 Going back to that day in September 2010, I thought that I would add to the article by offering the author a copy of the match report for the Derby game, which I had, so that it could show why Bob Buist and Peter Connolly had impressed Jack Goodall. Reading through it. something struck me. Connolly (referred to as Peter) was mentioned several times in the report and in the line-up at the end of the piece, but Buist wasn’t. Strange. Also worth noting is the referee, NL Jackson, who will return in a later article as a villain in the story.

I then started to look into Buist’s career. First stop was Fred Ollier’s Complete Record (1995) – the bible for Arsenal statisticians. Here is how Fred has recorded the line-up: 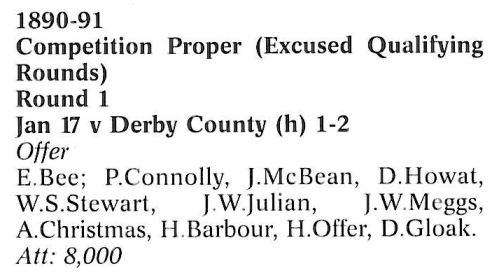 No mention of Buist. Then a look at his biography: 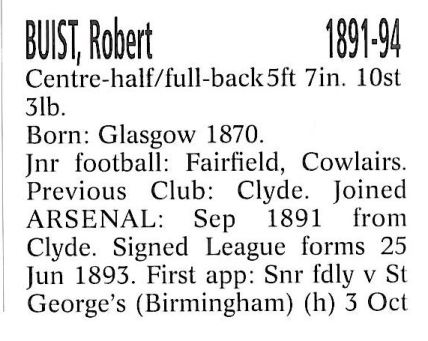 Wow. According to the club’s official historian, Bob Buist didn’t join Royal Arsenal until September 1891, eight months after the Derby game. The following extracts from the Woolwich Gazette confirm this:

On the day that he was supposedly being tapped up by Derby, Bob Buist was actually playing for Clyde in Glasgow.

What has happened here, as we have found out many times since, is that a source has been accepted without question and repeated by respected names until it has become a “fact”. Arthur Kennedy’s article in The Book of Football must have been written from memory which was obviously somewhat clouded.

This is one small part in a set of events that could have seen the club disappear, the subsequent parts have also been mis-told. On their own they don’t amount to much, but added together they show how easy it is for the wrong information to become de facto.

In the second part of this story, we look at what happened when the members of Royal Arsenal FC voted overwhelmingly to turn professional in May 1891.

As a footnote, the question that follows from the above is: “who was approached by Derby?” We can’t say for sure as no player was named. However, the South Eastern Herald reported on 23 January 1891:

I hear that the Derby managers on Saturday last made great efforts to secure three of our men. They had the gold on the table, and the forms filled up already for signature. I think some protection should be given to players when we are meeting professional teams in the future.

So, it was actually three players, not two. We believe that two of those were Peter Connolly, the club’s star player, and goalkeeper Teddy Bee. Looking at the rest of the team I would guess at Bill Julian or David Howat. We’ll keep searching in the hope that the names do turn up though.