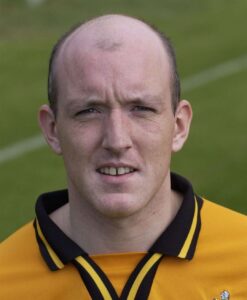 Son of Theo Foley, he made two youth team appearance for Arsenal before becoming a well known figure within the Kent semi-professional game throughout the 1990s and 2000s.

Born on 6 October 1971 in Greenwich, he was a no nonsense centre half known affectionately as “Mad Dog”.

A youth player for RACS, at 16 he played twice for the Arsenal youth side during the latter end of the 1987/88 season in the South East Counties League. His debut came as a substitute against West Ham United on 5 March 1988, and then he started against Cambridge United on 26 March 1988. The Gunners were victorious in both matches giving Paul a rare 100% winning record in his brief Arsenal career.

Foley joined Margate in the summer of 1989, just after his dad had assisted George Graham to the Anfield triumph, and he began an odyssey amongst a plethora of Kentish football clubs – many of whom he signed for twice. Indeed in one season he turned out for four different clubs!

Another change of scenery occurred with a move to Maidstone as captain where he added to his winners’ medals as they won the Kent League and Kent League Cup in 2001-02 and a season later won the Kent Senior Trophy but Foley left during 2003-04. A few games for Dartford and Erith came in the same season and he returned to Cray Wanderers at the end of 2003-04, then playing at Bromley’s Hayes Lane ground, appearing as part of their Kent League title winning team.

He played for VCD Athletic (Crayford) between 2004 and 2010, which was his longest period at one club. He helped them to the Kent Senior Trophy in 2005-06 becoming player-coach in 2007-08, and the following season led them to the Kent league.

Paul then managed Chatham Town for the 2010-11 season, and at the age of 40 played for Lashings against Maidstone Vets at Bearsted, but soon after was diagnosed with a brain tumour.

With his illness getting progressively worse, he wrote “Theo Give Us A Ball” with his dad. It gave him a focus and is a great read, obviously being a labour of love for Paul.

Paul Foley died on 10 April 2020 after a long battle with a brain tumour, tragically just two month before his father.