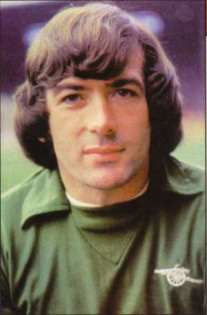 Veteran goalkeeper Pat Jennings made the short move across North London earlier in the week to work with his old manager Terry Neill, and made his Arsenal debut on 12 August 1977 which was the same day that Jimmy Rimmer left the Gunners for Aston Villa.

The former Spurs ‘keeper was called upon to make three good saves in this friendly at Kenilworth Road, with the one in particular from Steve Buckley making his £45,000 signing look a spectacular summer bargain. But he was beaten in the second half by a John Faulkner header that equalised a first half Trevor Ross goal for Arsenal.

A 6,315 crowd who had each paid £1 to sit or stand anywhere in the ground on a first-come first-served basis received tremendous value for their money in a lively match. The main attraction for the crowd aside from Jenning’s debut, and the return of Don Howe to the Gunners as coach was the appearance of ex-Luton player Malcolm Macdonald.

Unfortunately for the Gunners he had a game to forget, missing a 43rd-minute penalty and was out of luck again in the 80th minute when he had the ball in the net but found it disallowed for pushing.