“A man of principle and of vision, sometimes a prophet in the wilderness and a footballer of breathless magnificence. How English football could do with another Don Howe today” 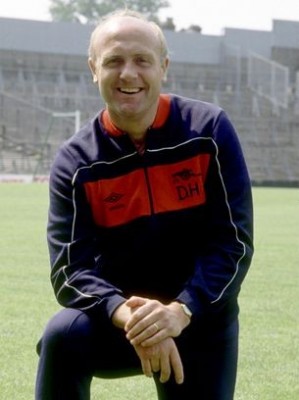 Instrumental in the 1970-71 double win Don, a genuinely great coach, was earlier the 507th player for the Gunners and later a manager. An England international right back his coaching prowess and organisational skills were equally in demand and admired. His time as player, coach and manager at Arsenal spanned five decades.

Born 12 October 1935 in Wolverhampton, he joined West Bromwich Albion in 1950 from school, and signed professionally at the Hawthorns in 1952 as a right back.

He scored 19 times while amassing 379 games for WBA between 1955-64, and while at WBA his top rate performances meant he appeared f0r England at right back on 23 occasions, including in the 1958 World Cup Finals in Sweden. 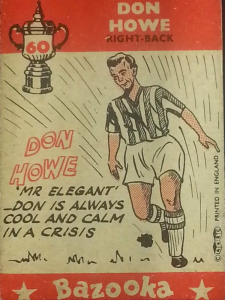 After training disagreements and a contractual issue with the manager Billy Hagan, which marred his final season at WBA, he was signed by Billy Wright for around £40,000 in April 1964.

Howe made his first appearances in Arsenal’s colours in the end of season tour to South Africa and made his league debut on 22 August 1964 at Anfield (the first match to be featured on Match of the Day). A virtual ever present since this game at the start of the 1964-65 season, he sustained a broken leg at home against Blackpool on 5 March 1966.

Peter Storey at left back and Jon Sammels at inside right that fateful day, both saw him fracture his right shin on a rare forward sortie as he collided accidentally with goalkeeper Tony Waiters. Storey said: “It was a horrific injury, which made my stomach turn over…the bone was there for all to see poking through the skin”. Sammels confirming this description noted: “It was the worst break I have ever seen”.

Not surprisingly given the extent of the injury it ended his season. During  the summer of 1966 he replaced George Eastham as the club captain. However, he struggled to retain full match fitness, playing in just two more first team matches, his last Arsenal game coming on 13 September 1966 at Highbury in a 1-1 draw with Gillingham in the League Cup. In total he played 74 times, scoring once, for the Gunners first team. 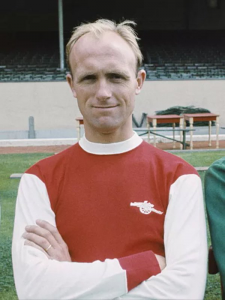 Out of this disappointment came a huge silver lining as having already studied for coaching qualifications he was appointed reserve team player-coach by Bertie Mee and, in October 1967, with the departure of Dave Sexton, was made first team coach. 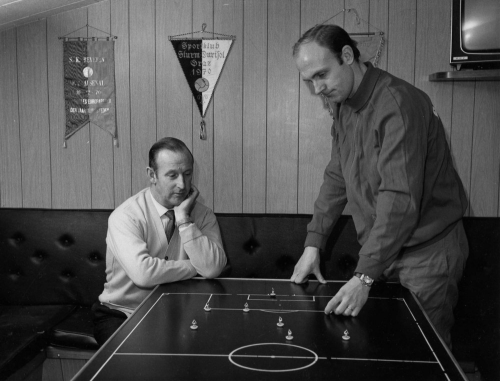 From there he set about systematically improving the defence, introducing zonal marking,  and tightening the team’s balance with many of those he played with a few seasons earlier. His acumen and forward thinking led to the Fairs Cup win in 1969-70 and the double the season later.

Sadly after a snub by Denis Hill-Wood in the aftermath of the double win he was minded to leave to manage his  old club WBA. The players were indignant and subsequent events highlighted who was the tactical brains behind the double team as Arsenal then spent a number of years declining to such a point that they flirted with relegation by the middle of the decade.

After four seasons at WBA he had short spells at Leeds United and then Galatasaray before re-introducing himself to the marble halls of Highbury in August 1977 as coach in the Terry Neill regime. The trophy highlight of this period was the dramatic 1979 FA Cup win at Wembley, as all the other efforts to get into finals came to nothing. 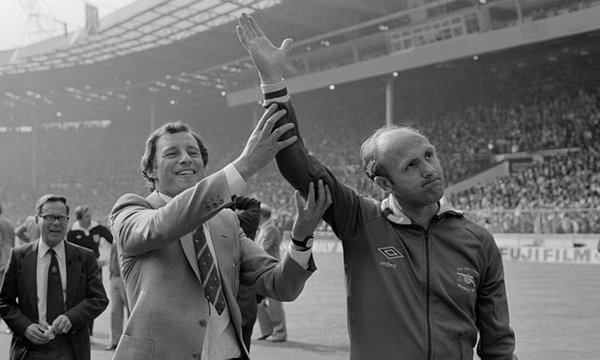 With Terry Neill after the 1979 FA Cup final win

He took over as caretaker from the ailing Neill in December 1983 and was appointed manager, incidentally the last English manager of Arsenal, in April 1984. Don Howe was key in the development of future winners including David Rocastle, Paul Merson, Tony Adams, Martin Keown, Michael Thomas, Niall Quinn and Martin Hayes in his time at Arsenal in the 1980s.

Despite being thought of as proponent of the defensive game, during his first 12 months as Arsenal manager the club played some breathtaking attacking football, taking the club back to the top of First Division for the first time in 11 years.

However with the club seemingly treading water, behind the scene board shenanigans again left him with little option other than to resign, and he did just that following the 3-0 win against Coventry on 22 March 1986, paving the way for the George Graham era.

After leaving Arsenal for a second time he was coach to Wimbledon where, with ex-Arsenal forward Bobby Gould, he masterminded arguably the greatest ever FA Cup final upset in the history of the competition with their win over Liverpool at Wembley in 1988.

After Wimbledon he managed both QPR and Coventry, and on his departure from the Sky Blues, Howe worked at Chelsea for the 1992-93 season assisting Ian Porterfield.

Also during his coaching career he was involved with England working with a number of managers including Ron Greenwood, Sir Bobby Robson and Terry Venables between 1981-1996. He played a key role in England’s World Cup campaign in 1990 and Euro in 1996 which, in reaching the semi-finals, were the best international performances since 1966. 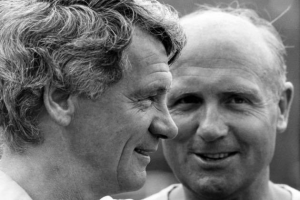 Don returned to Highbury as Arsenal Head Youth Coach in June 1997, and then had a more hands on role as coach of the Under 19s in February 2000 following Don Givens departure. His effect was immediate with the youngsters winning the FA Youth Cup in both 2000 and 2001, and the FA Premier Academy under 19s league in 2002. He retired from football at the end of the 2002-03 season.

Perhaps the best testimonials for Don come from those who worked with him. Reading through biographies of players he coached, they have nothing but the utmost praise for him.

“a fine player but truly he was one of the greatest ever coaches in football. He was innovative and for us as a club he was instrumental and inspirational. He made us believe as a team. He should be remembered forever for his contribution to coaching in England.”

“…Howe definitely made me a better player when he came to Arsenal.”

“He was a lovely man. Certainly one of the best coaches I have worked for.”

“Don was old school but he was a deep thinker and he really switched me on to make me more aware of the club and the game itself. He will be missed.”

WBA obituary – where the quote in the title is taken from.