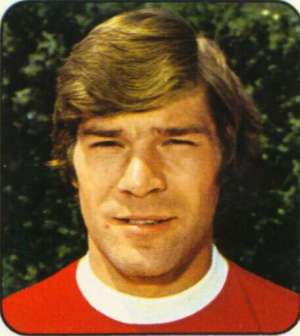 All Gunners’ fans were excited to hear that Terry Neill had signed the iconic Newcastle goal-scoring machine Malcolm Macdonald during the long hot summer of 1976 for a club record fee of £333,333.33p.

Technically his first game was a 2-0 win against Notts County behind closed doors at London Colney – a game in which he scored – but this was no more than a glorified training session.

Eleven days later on 10 August 1976 he appeared in public for Arsenal against Swiss side Grasshoppers on a murky evening in Zurich. Macdonald completely upstaged the home side’s new big name signing from Real Madrid, Gunter Netzer.

Supermac opened the scoring after 35 minutes, nodding in Alan Ball’s cross and doubled the lead on 54 minutes when he robbed a defender on the edge of the penalty area and chipped it over the goalkeeper with his fabled left foot. He almost managed a hat-trick but wasn’t quite quick enough to meet Sammy Nelson’s cross at the far post. Liam Brady crashed home a third from 20 yards out with two minutes remaining.

After the match he described his debut as a “nice little start” and modestly added:

“By scoring these goals I proved what I am here for.”