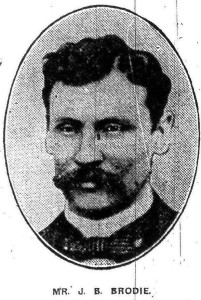 On a very cold day with an icy winter pitch Arsenal scored via James Henderson after 15 minutes from a corner. They also had an effort disallowed just before half-time and not only did John Brodie, the referee, disallow the goal but to add insult to injury gave Arsenal the resultant free-kick rather than allow advantage and let the goal stand. From this point on the assembled masses objected strongly to the referee’s rulings.

The Burton players had indulged in some very dirty play, and one of their number was spoken to four or five times by the referee for his abrasive tactics. On one occasion he appeared to be sent-off by the referee but was recalled as he was leaving the pitch which added to the home feeling that the referee was not in control of the match.

The feisty game, made more spicy as Arsenal eventually countered Burton with their own strong-arm tactics, went into the final minute. As Burton frantically attacked, one of their players fell to the ground and, consequently, they were awarded an extremely dubious penalty. Arsenal goalkeeper Harry Storer was unable to save the spot kick; the Burton players “turned somersaults and gave each other tokens of joy” while the home crowd “hooted and yelled” as the game was squared.

Immediately after the final whistle was blown, the crowd ran onto the pitch and the referee was hit and cut under the eye from one blow as his passage to the dressing rooms was blocked by the crowd. A number of the Burton players had evidently seen the attack and tried to get to the assailant, which only intensified the Plumstead masses’ feeling of anger towards the opponents, and they endeavoured to assault members of the visiting team before they got back safely to the pavilion. It was reported that the attacker was apprehended by some of the Burton players but the Arsenal crowd ensured he could safely make his escape.

A large body of police were required to clear the ground as the players and officials were locked inside the pavilion surrounded by the mob. As many as 2,000 locals waited for the Wanderers outside the ground making their feelings very clear, and exuding menace. But the Wanderers players were smuggled out to Plumstead Station via another exit under a police escort and consequently avoided the crowd’s ire. It appears that the opposition players were the prime target for the crowd, but the referee copped the rap.

Brodie was knocked out cold, and after being helped off the pitch by police, club officials and players, lay insensible in the dressing room for a long time after the match. He was tended to on Saturday evening by the Woolwich Arsenal surgeon, Doctor Williams, and did not begin travelling back to his Wolverhampton home until Sunday evening.

The next weekend saw the FA Cup first round but Brodie was unable to take control of the Newcastle v Burnley game he had been assigned to officiate owing to the extent of the injuries he sustained in Woolwich. He wrote to the clubs explaining why he could not appear:

“When I was struck on the side of the face I thought they had smashed my cheek bone…I could not run for five minutes – never tell of an hour and a half”.

Initial press speculation gave the assailant as a man at the Royal Arsenal, or a gang of three or four men, or one of the betting gang present at the ground. Additionally, there was debate as to how he had been hit: either with a single punch or with the use of a “clinker” – a type of industrial brick – which may have been used as a missile.

Whoever he was, and reports eventually agreed it was an individual, he was never brought to justice. But it could have been, as this extract from the Sheffield Evening Telegraph shows, that the club thought they knew who was responsible. However, as the referee did not turn up at the magistrates hearing on 1 February, a summons could not be issued. 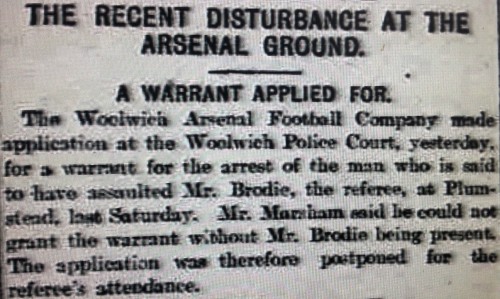 Warrant for the attack on Brodie. 2 February 1895

The club did everything they could to show contrition for the attack. They offered a £5 reward for information, which fell on stony ground as many shareholders apparently knew his name but refused to divulge any concrete details; they must have gleaned some particulars from elsewhere as they applied unsuccessfully to the courts to deal with the miscreant; and also apologised profusely to Brodie.

However, Woolwich Arsenal could not hide from their football punishment once the referee’s report was sent to Lancaster Gate. The FA, in a consultative committee meeting held on 6th February:

“Resolved that the Woolwich Arsenal ground be suspended for six weeks from 11th February, and that the club be prohibited from playing within a six mile radius therefrom”.

The committee had originally considered closing the ground until the end of the season, and bearing in mind the anti-professional stance of those on the committee and their dislike for the first southern professional team it was quite surprising that this did not occur.

But, despite the lessening of the original decision, in many ways Arsenal were dealt with relatively harshly as next season an identical assault on a referee occurred at Wolves but the punishment was a mere two weeks’ ground suspension. It was quite ironic that Wolves were the next League team to be involved in this kind of incident, as Mr Brodie had been a prominent and famous player for many years for Wolves until a few seasons previously.

Woolwich Arsenal appealed for a reduction of both the ground suspension and radius within which they were allowed to play at another FA meeting on 20th February but it was not even considered by the committee, and rejected as being “out of order”.

Royal Ordnance Factories FC offered Arsenal the use of their new ground at Maze Hill but the distance restriction precluded this offer from being taken up, and the club had to look further afield to speak to hosts for their games. Though fortunately in the six weeks of suspension the club only played two home league games.

The match against Burton Swifts on 23 February was played at New Brompton (Gillingham), and the 9 March game against Leicester Fosse was played at Lyttleton cricket ground in Leyton. Arsenal won the first 3-0 and drew the second 3-3. The crowds of around 5,000 and 4,000 for the two games were little changed from the norm for the club in this their second season of League football. After this, Arsenal’s challenge for promotion petered out and they eventually finished eighth, one place below Burton Wanderers. 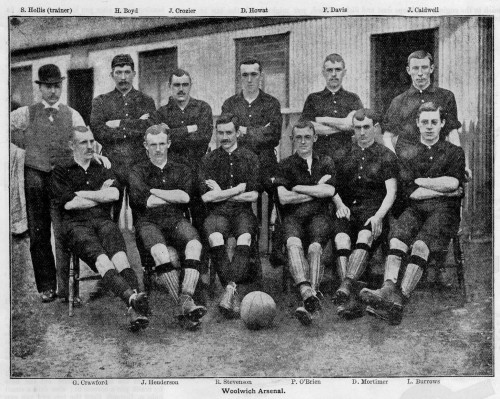 In addition to these two league games, two “home” friendlies were also played whilst the Manor Ground was suspended. Friendlies were still a staple part of Arsenal’s fixture list, In fact, they played 31 during the 1894-95 season to complement their 30 league games. Both games were against northern teams who were touring the south of the country – how times have changed! The first game, on 25 February against Liverpool was played in Alexandra Park which was accessed via Nightingale Lane, off Priory Road. The pitch was a quagmire and only 1,000 turned up; others probably unable to find the ground! On 16 March, Gainsborough Trinity were played much closer to home; the Bat and Ball Ground in Gravesend was the venue.

The authorities had become increasingly concerned about referee protection and this was reflected in many press articles before and, especially, after the Brodie assault about the best way to improve safety for the game’s protagonists. In February 1895, and as a direct consequence of this incident, the Football League suggested that:

“Clubs rail in their grounds and take every precaution to prevent spectators crossing the playing field at the conclusion of their matches”.

This indicates that, like other clubs, at Arsenal prior to 1895 there was not a fence surrounding the pitch, and it was easy for the crowd to rush on to the playing area with only a rope separating them. Indeed the language used in reports indicate that running onto the pitch at the end of a game was a normal event at the Manor Ground, and was tolerated by the club as the crowd would usually congratulate or commiserate with the home and away players in a far less aggressive fashion.

In the summer of 1895 the club built a fence around the pitch to comply with the League’s wishes. There was also an element of self-preservation from the Arsenal directors as, whatever the cost of the fence, it would have been minor compared to the consequences of a repeat of this rowdy incident.

For those of you wondering why the papers did not use the word “Hooligan”, there is a simple explanation. The word was not invented until three years later, only coming into general usage in the English language in 1898.

So back to the question in the introduction, what would happen today in the media if an assault of this nature occurred at Ashburton Grove

This article is expanded from “The Crowd at Woolwich Arsenal FC”