Arsenal’s most prolific goalscorer, and no one’s heard of him

Whilst filming some short clips about The Arsenal’s early history with Arsenal Media yesterday I mentioned the club’s most prolific goalscorer, his part in Arsenal’s record defeat and the fact that he is virtually unknown.

I must admit that I only discovered who he was whilst setting a quiz last year and I was surprised that it wasn’t one of our most well known forwards. The table below shows the players in the top 10 that trail behind our man who enjoyed finding the net on a regular basis.

As you can see there are some fantastic players in the list. Most do not need an introduction. Those that do are Harry King who was signed during the summer of 1913 and played most of his games in the Second Division before the First World War, and James Henderson whose haul was helped by the fact that he scored 12 goals in 8 FA Cup qualifying round games against the likes of City Ramblers and the 2nd Scots Guards.

Henderson actually played three games alongside our most prolific goalscorer at the start of the 1894-95 season. 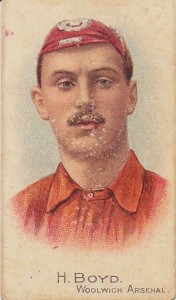 Born in Pollokshaws, Glasgow, in 1868 Henry played his first senior games in England for the short-lived Sunderland Albion. When Albion folded in 1892 he moved to Burnley where he played four league games, scoring one goal and then on to West Brom where he scored one goal in seven league games. Not the most prolific of goalscorers but the Woolwich Arsenal committee obviously saw something in him and brought him down south in May 1894.

Henry played his first game in the club’s colours in a 4-0 friendly win against Fleetwood Rangers on 8 September, scoring one goal. Two days later he made his league debut at home to Grimsby. Woolwich Arsenal lost 1-3 with Boyd scoring Arsenal’s goal.

He then put on an amazing run, scoring eight more goals in the next five league games:

During this period he also scored five goals in three friendlies. However, on 15 October he broke his ankle whilst playing in a friendly against Sunderland. At this time, friendlies played a big part in Woolwich Arsenal’s fixture list. They played 30 league games during 1894-95 and 31 friendlies. The attendance of 10,000 for the Sunderland game was the second highest home gate of the season.

Some sources state that the broke his ankle in the previous league game against Newton Heath. This is an assumption as it was known that he broke his ankle but these sources did not look into the fact that he played against Sunderland. 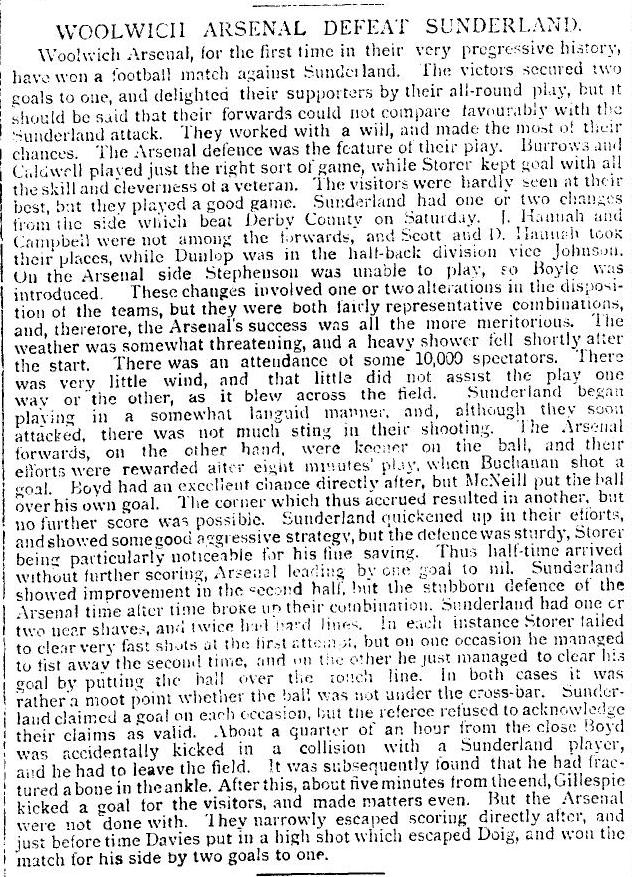 These sources also state that the injury kept him out of the game for a year as his next league appearance wasn’t until October 1895. However, the injury wasn’t that bad and he returned to the team two months later on Christmas Eve in a friendly against New Brompton (who are now known as Gillingham).

What happened next is that Henry went AWOL. He got homesick and returned to Glasgow. Boyd wrote to the Arsenal directors apologising for his disappearance and asking if they would take him back. The directors ignored his request until October 1895; with Arsenal holding his registration he was unable to play for any other team.  He returned to the team and scored in the 5-0 win against Burton Swifts. All told he scored 13 goals in 22 League and FA Cup games during 1895-96 as well as 30 in 17 friendlies.

The following season he carried on where he had left off with 10 goals in 12 games. Then came a big problem. Boyd was one of the players that played in the 0-8 defeat against Loughborough in December 1896. We’re not sure exactly what happened but reports suggest that he and some other players, having been criticised by the directors for their lack of effort in that game, got drunk and threw some choice insults back at them.

Whatever the reason, Boyd was suspended “sine die” by the club and was transferred to Newton Heath (who later became Manchester United) on 18 January 1897.

Henry’s record at Woolwich Arsenal was:

He continued his rich vein of scoring at Newton Heath with 32 goals in 60 games which included hat-tricks in consecutive games at the start of the 1897-98 season.

In the summer of 1899 Boyd returned to Scotland to play for Falkirk, after which we can find out no more about him.

Posted in: Players - B, Woolwich Arsenal

2 thoughts on “Arsenal’s most prolific goalscorer, and no one’s heard of him”