The recent publicity surrounding Manchester City’s decision to charge Arsenal supporters £58 got us thinking of any non-recent historical precedents, and there are a number of early occasions when unscrupulous clubs doubled their entrance gate for the visit of Arsenal supporters. Probably the most blatant occasion was when Royal Arsenal visited Clapton in October 1891 and the opposition kept the gate at 3d for the home fans but doubled it to 6d for the Reds without any prior warning. As Arsenal won 7-0 it is doubtful too many were overly concerned by the end.

However, it is a home game that we wish to highlight with regards to fans, the clubs and raised entrance fees.

Regularly during the Plumstead period the club struggled financially to survive and without the generosity and money of George Lawrance, James Cavey and George Leavey there would have been no club for Henry Norris and William Hall to take over in 1910.

On Boxing Day 1911 Tottenham came to town and the Arsenal management decided to make this a shilling gate. They were somewhat unlucky as it was an exceedingly wet day which would have reduced the crowd anyway as neither terrace had any cover.

There was a demonstration against the added fee as noted in the Kentish Independent:

However, the Woolwich Gazette told a similar but more revealing and humorous story of the demonstration saying this:

“There was some discontent before the match started, some 200 persons standing outside the entrance protesting against the 1 shilling gate. However  when Arsenal scored within 5 minutes of the start there was a rush for the gates and they paid up their shillings like lambs”

So what does it tell us? Not a lot other than football clubs have a “product” many want to witness. The only way to regain some element of fan control is to vote with your feet and refuse to go. But as the Woolwich Gazette clip shows, that is easier said than done. 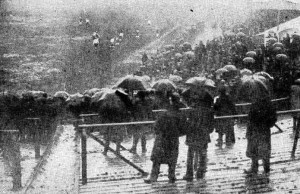 Some of the hardy souls who watched the Boxing Day 1911 game in the rain from the vantage point of the Spion Kop, as Woolwich Arsenal beat Spurs 3-1.