Hull v Arsenal Late Fixture Change? Not as Late as in 1936

Sky Sports and The Premier League have incurred the wrath of Arsenal fans over the last week or so for changing the date of the Hull City v Arsenal game from Sunday to Saturday with only nine days’ notice. This is so that Chelsea’s game with Sunderland can be brought forward to Saturday to give them more time to prepare for their Champions League game on the following Tuesday.

If it wasn’t for the fact that Sky Sports insisted that the Hull v Arsenal game MUST be shown live then the original date and time could have been kept. I guess that’s the price you have to pay when your master sells his soul to the devil.

Anyway, onto the historical side of the subject. Nearly 80 years ago the Football League went one (or possibly two) steps further by changing the WHOLE fixture list on the day before the games were due to be played. Not only that, but they did it for two consecutive Saturdays (remember that back then all weekend games were played on Saturday).

The reason for it, as usual, boiled down to money. During the 1930s the pools companies were growing like wildfire. A small flutter could result in a sizeable win which appealed to the average working man. The Football League looked on at the amount of money – as much as £30 million per season – that was being raked in using their fixtures and decided that they wanted a piece of it.

As the legal process of copyrighting the fixture list looked to be fairly protracted, the Football League took immediate action by scrapping the remaining fixtures for the season and came up with a cunning plan to thwart the pools companies by telling the clubs on Thursday evening who and were they would be playing on Saturday. This would not give the pools companies enough time to print and distribute their coupons.

However, protests were quick to come in from the players, fans and railway companies who would not know until Friday morning what their plans for the weekend would be. In the ensuing days a number of clubs, led by Leeds United, also started to express their concerns at the League’s plan.

On 28 February the first set of “secret fixtures” were announced to be played on the following day. The Football League Management Committee made their task easy by simply switching the fixtures due for 29 February with those due to be played on 14 March. This didn’t actually affect Arsenal as they were playing Barnsley in the FA Cup on 29 February. If they hadn’t still been in the FA Cup they would have been due to play away to Preston but would have then had to play away at Derby.

Can you imagine having booked train tickets to go to Preston and then, the day before the game, find out you then needed to change your travel plans to go to Derby?

For the following weekend the Football League pulled the same trick by switching the fixtures with those of 4 April. This meant that Arsenal were now to host Huddersfield rather than Brentford.

It was estimated that this meddling by the Football League Management Committee to try to gain £100,000 per year had cost the clubs more than £50,000 over two weekends due to a drop in attendances. And for Arsenal, they missed out on two London derbies due to be played on Saturday. 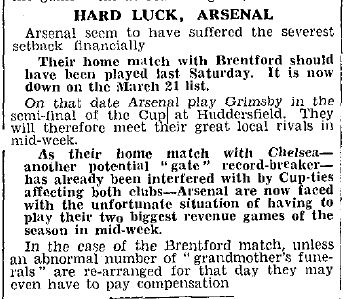 At a meeting on 9 March the members of the Football League voted unanimously to scrap the “secret fixtures” but to give the Management Committee the power to pursue the copyrighting of the fixture lists and to enter into negotiations with the pools companies. Eventually peace broke out and the two parties lived a life where they tolerated each other with the occasional tantrum, usually thrown by the Football League.

Today, however, the Premier League is quite happy to be bent over a table and violently rogered by Sky Sports.

Here is a classic from the 1970s that sums them up: