Arsenal in the FA Cup Final: Kits – “What Did She Wear?”

Arsenal Kit in each of the previous Finals

As part of the run up to the FA Cup final we will be looking into various aspects of Arsenal’s rich history with the competition. Today we cover kits worn in finals . 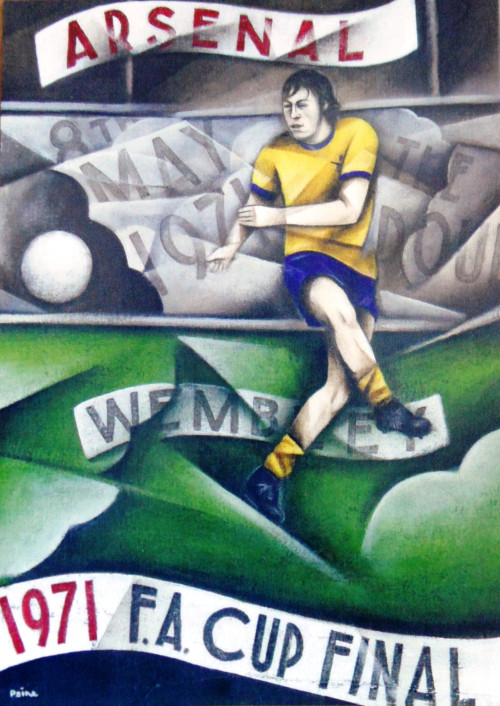 A fine depiction of Charlie as he crashes the ball goalbound in Yellow and Blue, by renowned football artist: Paine Proffitt.

After a conversation with our good friend GC of shewore, who incidentally has a fine range of merchandise for the final [see below], we thought it would be interesting to continue our FA Cup series with a look at the kit Arsenal have worn in all seventeen previous FA Cup finals.

The first thing that struck and also surprised me,  is that Arsenal have not worn yellow and blue since the awful 1980 final. As far as I am concerned the only thing that I remember from that game was the late and amusing foul by Willie Young in the last few minutes to stop Paul Allen from scoring. The yellow card he received sent the TV studio into apoplexy, especially Jimmy Hill, and shortly afterwards the footballing authorities decided to alter the professional foul to deny a goal scoring chance to be a red card offence. So, aside from being a huge crowd favourite (cue the songs), Willie Young was also responsible almost single-handedly for a football law change.

I have gone off at a tangent but the reason that game against West ham is important, as far as this article goes, is that Arsenal had been drawn as the “home” team but instead of going with the red and white sleeves chose to wear their change kit of yellow and blue, presumably hoping the last gasp success of the previous year would rub off. But it most emphatically didn’t.

As far as I can see, and as inferred in shewore,  one of the main reasons the yellow and blue kit is loved by fans for FA Cup finals is that we wore those colours in the two most exciting finals that Arsenal won in living memory. Firstly, the 1971 game when Charlie George crashed the ball past Ray Clemence in the final few minutes to win the double for the first time, and in 1979 when Alan Sunderland scored in the last minute.

Additionally in the list of  ‘after goal FA Cup final celebrations’ both numbers one and two occurred in these games and were carried out by the respective goalscorers. Another major reason is not FA Cup related, but yellow and blue were the colours when the 1989 League was won in such dramtic circumstances at Anfield 25 years ago.

Nevertheless it is an empirical fact that Arsenal have a better record while wearing the red and white sleeved home shirt, as can be seen in this chart, than the yellow with blue variety.

Prior to the white sleeves being added in 1933 Arsenal had won the trophy under Herbert Chapman but also lost two finals, so all red was statistically not greatly favoured, even though historically it is of immense importance as the 1930 triumph started off the great 30s side and was the club’s inaugural trophy.

In 1936 both Arsenal and Sheffield United wore red and white and, while they were different designs, it was surprising that neither team changed, though it was the first FA Cup won in the new red and white sleeved kit.

In 1950 both Arsenal and Liverpool wore change kits: the Gunners wearing a specially commissioned kit with shirts classically called “old gold”. To make sure that the players were used to playing together in this kit before such a big game it was tried in the league game at home to Newcastle two weeks prior to the Cup final. It was an obvious success with Arsenal winning 4-2. The kit was also worn in the home game against title-contenders Portsmouth a few days after the final victory. The players must have wanted to play in this ‘lucky’ kit every week as they won for the third time whilst wearing the old gold.

However this is not the same as the later yellow and blue kit, it was noted specifically by Arsenal as old gold, not yellow, and there was no hint of blue trim, while the shorts were white and socks hooped black and old gold.

This crest montage below from the forthcoming book @TheArsenalShirt highlights the main useage of the Yellow and Blue kit, and appears with hindsight to have been an attempt by the club in the Terry Neill era to replicate the stunning Double success of 71.  However of those four finals only the 79 final was a success. 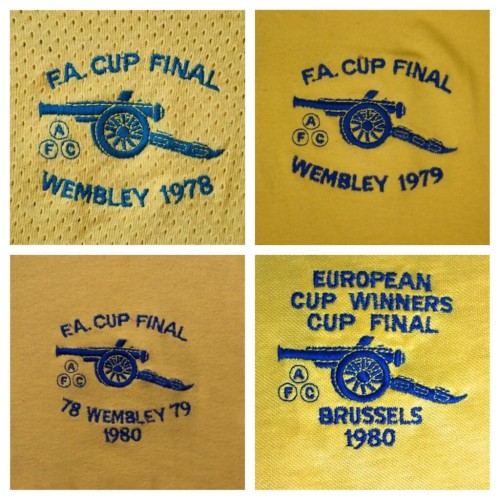 After this 70s and early 80s utilisation of the iconic yellow and blue, Arsenal have reverted to the tried and trusted and played all six finals (seven games) in the home kit, and it is likely that they will wear the same again against Hull as there is no obvious clash.

So in summary while the Yellow and Blue is rightly an iconic fans favourite of a certain age, the team will statistically stand more chance of winning the club’s 11th FA cup if they wear Red and White.

But whatever they wear UTA. 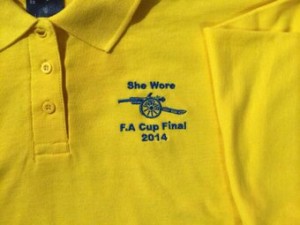 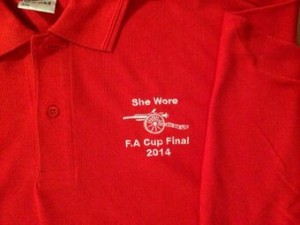 I have purchased a yellow and blue polo while Mr Kelly has gone for the Red and White ensemble. Please contact GC of shewore for further details.