As part of the run up to the FA Cup final we will be looking into various aspects of Arsenal’s rich history with the competition. We start with ticket distribution in finals.

The allocation of tickets for a cup final is always controversial and appears it has ever been so, as highlighted by the Voice of Arsenal quote above from 1950. However it is not just how the clubs themselves try to make as fair a distribution to theirs fans as possible, but also in the overall total provided by the FA. This article will review a select few ways The Arsenal have allocated tickets to some of the FA Cup finals we have competed in, and also comment on the total number available to fans for the biggest game of the season.

When addressing the ticket allocations of the past a factor to take into consideration was that in the pre-digital age before computers there were no assigned membership schemes like those institiuted from around the 1990s, and addtionally most tickets provided for any final were standing on terraces up to the period of the implementation of the Taylor report in 1990.

As it happens I went to both the 1993 FA Cup and League Cup finals which were the first time Arsenal had been to a Wembley final after it was made all seater. I can genuinely not remember the method utilised other than a vague recollection that I wrote to the club as requested and was lucky in the draw. My esteemed colleague Mr Kelly found some information that led me to believe I must have been part of the Ticket Registration Scheme and I was indeed a bit jammy to get the tickets for both finals as we were far below the Bond holders and season ticket holders in the pecking order. Mr Kelly as a season ticket holder also got his Wembley seat.

For the 1930 FA Cup final Arsenal’s allocation method was to take a coupon from a recent match day programme and send the application voucher into the club whereby a draw was made, and those lucky enough were to go on to the Wembley match. This notion was first mooted by Herbert Chapman and the game in question was against Blackburn Rovers.

As there were 20,000 applications from Arsenal fans it seems to be a fair way of allocating scarce resources with each applicant having a 1:3 chance of a ticket. In all it was stated that nationwide 250,000 people applied to the various football bodies and clubs for the 92,488 spaces in 1930.

The allocations for each team were only 7,000 each which, at a percentage of approximately 15% of the crowd, was itself a massive increase on previous seasons’ allocations to the competing clubs.  Compare that to the 55% allocated to the competing teams of today, and the amount currently offered by the FA does not appear unreasonable. But, as ever, the amount of tickets provided for the fans of each competing team has come in for criticism, especially after Arsenal received approximately 50,000  for the recent semi-final.

Whether this is fair is a moot point, but it is policy for the FA to allocate a set number to the supporters, in this years case 25,000 each. The others are handed out to associate members and other worthies. It is no good for the CEO of Arsenal belatedly mentioning the competing clubs should be given more seats now we have qualified. If football clubs were exercised about the matter they would have made a united concerted effort at the start of the season to ensure the ticket levels for those competing was dealt with by the FA in good time.

As an aside in 1950 the 5th round home tie against Burnley on 11 February was an all-ticket game. Tickets for this game were sold at the reserve game v Brighton on 4 February which resulted in a 29,000 crowd at the Brighton game.

A modified Chapman-inspired coupon/voucher method re-appeared at  Arsenal from 1964 onwards, though the lottery concept had been removed, where the programme had a voucher inserted  in every match in case of qualification into the final. A season’s worth of vouchers from the programmes would guarantee a standing ticket, costing £2.50 in 1979, and those with less than the full complement had a nervy wait, after the four days of those with the full complement of 24 had applied (as scan below). 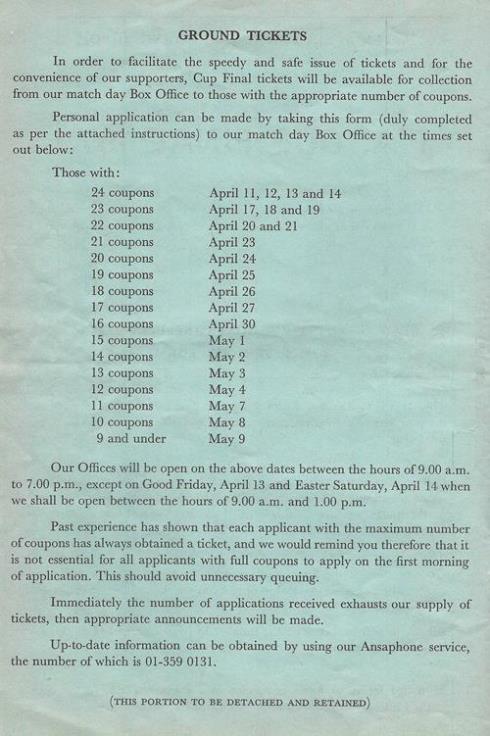 This method was used again in 1980 and the sheer number of extra games played in that season meant the vouchers required for a full house was 28, though the ticket had risen to £3.50.  This scheme was used up to the 1988 League Cup final for standing tickets.  It should be remembered that in this same period season ticket holders were given priority for seats at Wembley, and the voucher scheme was for standing room only.

Back in 1936 the occasion got too much for some fans and even the Arsenal manager, George Allison, was manhandled as many realised they were not going to be one of the 10,000 Arsenal fans to get a ticket in the week leading up to the final.

So, in summary, the level of tickets allocated to each team this year and recently is historically a large figure in both absolute and percentage terms. Due to the large number of season ticket holders at the club it is difficult to see all interested members getting a seat for the 2014 final, and whatever system employed will be seen by some as unfair. For future some kind of season long voucher system aligned with season tickets appears to be the fairest as those who attend regularly get the best chance of witnessing the Wembley final.

We have tried to ascertain a few ways how the club gave out tickets over the many years of the club’s FA Cup, though we would love to hear of your own stories of finals past and how you gained access to the games.

If you can’t get a ticket, don’t despair, go to the pub or have a final party as you know you can watch the game and be with your mates and family. Far better than having to endure sitting next to a boorish “football expert” who shouts his ‘knowledge’ for all to hear for the whole of the match. In the days of the terrace you could move away and be with friends. Seating has stopped that, but that’s another story.