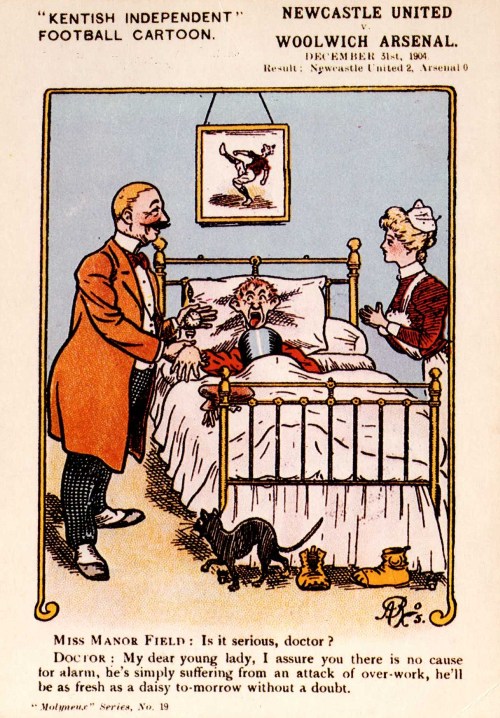 The cartoon has a worried Nurse, Miss Manor Field, asking the doctor whether the defeat is serious for Redshirt. The avuncular Doctor’s response is a reference to Woolwich Arsenal’s unbelievably tough Christmas schedule with Woolwich Arsenal having been promoted to the First Division for the first time, playing four games in five days during the Christmas period, three of them away.

They started at home against Sheffield United winning 1-0 on Christmas Eve in front of a festive 20,000 Woolwichers. The team was graciously given Christmas Day, a Sunday, off by the Football League, but were back on the train to the Midlands for Boxing Day.

The game on the 26 December was against Aston Villa in front of 40,000. Unfortunately, the result was a reverse for Woolwich Arsenal as they lost 1-3. We have to assume they stayed at a hotel in Birmingham rather than go back to South London for the next day they made their way to Nottingham to play Forest on 27 December.

Here they won 3-0 watched by a crowd of 16,000 and, from Nottingham, the next day travelling took them to Sheffield for the return against Sheffield United. An unseasonally large reverse of 0-4 was seen by 30,000 on 28 December.

The team returned to Plumstead for a well earned rest, but was soon in action again three days later at home on New Years Eve playing Newcastle in front of the second largest crowd of the whole season.

Newcastle ran out easy winners with two second half goals in front of 30,000 festive fans who were in good voice, insulting the Newcastle players freely especially Appleyard who, after some foul play on Percy Sands, received a verbal torrent from the Spion Kop. He responded in a manner well known to Gooners fans in the 70s with a Charlie George style V sign.

Newcastle were crowned champions at the end of the season, and should really have had a toast to the Plumstead fog  during their victory celebrations.