Arsenal have no cutting edge against the Rams 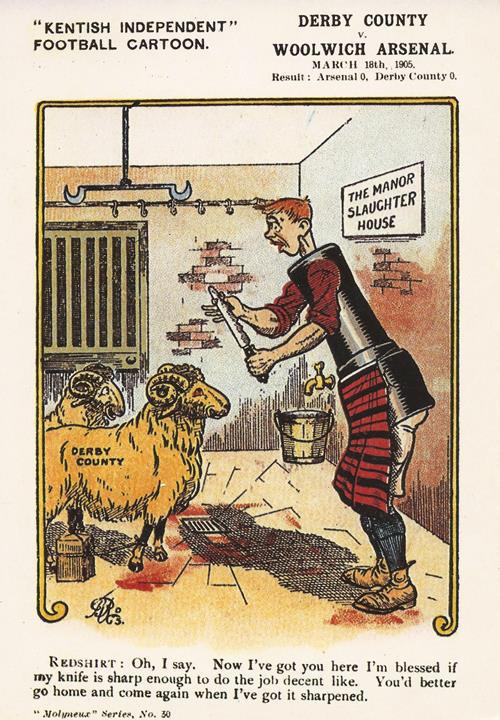 Another 0-0 draw between the teams, the second this season. Even Steve Bloomer could not do anything to break the deadlock, and Arsenal missed many chances. As the cartoon alludes to, Woolwich Arsenal had little to no cutting edge in the game. Though Arsenal were hampered just before half time when they went down to ten men as full back Archie Gray had to leave the field with an injury.

It must have been a serious knock to his shoulder as he did not play again during the rest of the season. As there were no substitutes in those days injured players could not be replaced during the game.

Archie joined Arsenal as a full back for the 1904-05 season, signed by manager Phil Kelso under whom he had played at Hibernian. He became a regular in the side at right back, missing just a handful of games at the end of the season through injury. His first game was Woolwich Arsenal’s first ever game in the First Division – a 0‑3 away defeat against Newcastle. Although he was at the club during both runs to the semi-finals of the FA Cup, he missed the first through injury but played in the Sheffield Wednesday semi-final in 1907.

By the 1911-12 season it was clear that his time was over, and although he played four of the first six games at left back that season he was then left out of the side until his final game, his 184th in the league and 200th overall, against Notts County on 23rd December 1911. He never managed to be ever-present in the side, but in 1908‑09 he played 33 out of 38 League games and all four Cup games.

By this time, Arsenal and Fulham had connections, and consequently, being surplus to requirements at Arsenal he was transferred for £250 to Fulham who were then in the Second Division. He played 24 League matches for Fulham in three seasons before his retirement at the end of the 1914‑15 season. He returned to Glasgow and became a dairyman.

All biographical items taken from Woolwich Arsenal: The club that changed football