Fun and fireworks at Trent Bridge 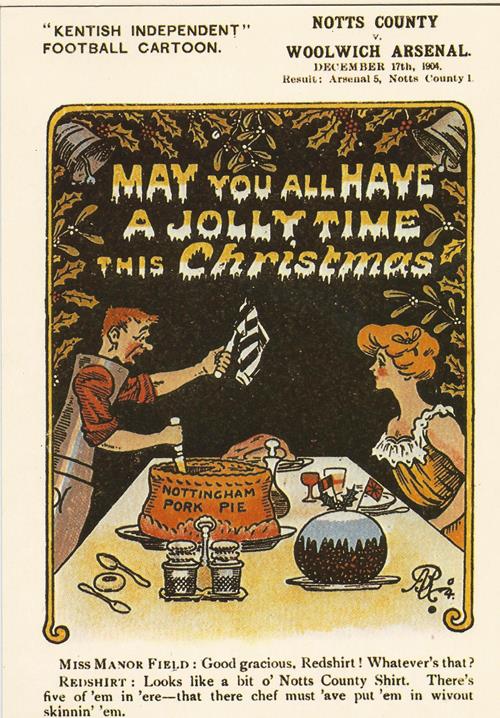 A resounding 5-1 away win was celebrated by the many Woolwich excursionists who were all intent on enjoying themselves on their day out. The goals were scored by Charlie Satterthwaite who scored a brace and TT Fitchie, an amateur, who hit a hat-rick.

This game was the first where the excursionsits were reported as bringing fireworks to add to the atmosphere. The Torpedo Factory workers from the Royal Arsenal provided these fireworks which were thrown on the train journey going to the game, in town and at the game. Additionally the revellers painted the town red with their drunken dancing and music. The extract below gives an example of the good humoured shenanigans that occurred:

The referee had to stop the game and request that the fireworks exhibitions desist, as fireworks were being let off after every goal and thrown onto the pitch from different sections within the crowd, with the second goal having the loudest pyrotechnics. Additionally with the fire-crackers as accompaniment, the Arsenal crowd in the second half ceaslessly sang “Farewell to you , Bluebell” which was a music hall number about soldiers, love and war.

After the game the crowd rushed onto the pitch and carried players from the field including the hat-trick scorer, Fitchie.

The Cartoon is quite a simple one with Redshirt sitting down with a demure Miss Manor Field, to a Christmas Dinner with a turkey in the backgound and a Christmas pudding in the foreground. They are on the Nottingham pork pie course which also has five Notts County shirts, one for each of the goals scored, inside it. They are sitting underneath a banner which says:

“MAY YOU ALL HAVE A JOLLY TIME THIS CHRISTMAS”

This Festive sentiment is one that both Andy and myself wish to re-iterate and send to all Arsenal supporters.

Have a great Christmas and New Year, and here’s to some more points for the Gunners.