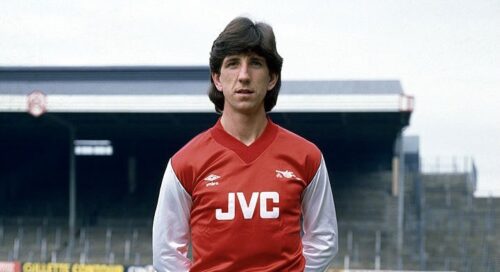 An old school centre-forward, and occasional emergency centre-half, the England International revitalised Arsenal at the end of 1983/84 and was part of a great attacking team at the start of 1984/85.

Born 22 May 1953 at Farnworth, Bolton he was a no nonsense target man, with a rare ability to bring other strikers into the game. Starting in junior football for St Gregory’s Boys Club, Paul was noted at Chorley United in the Lancashire League during the 1972/73 campaign when spotted by Plymouth Argyle scouts and they persuaded him to move to the Third Division Devon club for £6,000 in May 1973. He made an immediate impression at Home Park and in 1974/75 helped the Greens to promotion into Division Two (now Championship). Overall he made 155 appearances and scored 61 times, before Bobby Robson signed him for Ipswich Town in October 1976 for £200,000 plus add-ons dependent on future England selections.

At the Suffolk club he scored 139 goals in 339 games in a golden era under Bobby Robson in which they won the FA Cup in 1977/78 and UEFA Cup in 1980/81. Of course the FA Cup final win came at the expense of  Arsenal, though only the most churlish of Gooners would deny that Ipswich fully deserved the victory on the day.

After being transfer listed by Ipswich he was bought for £150,000 on 9 February 1984 by Don Howe who was well aware of Mariner’s talent as he coached him at the England national team. The 599th player to don the famous red and white shirt, his debut came on 18 February 1984 at Highbury partnering Charlie Nicholas and Tony Woodcock upfront in a 1-1 draw against Aston Villa. This attacking triumvirate ensured the team moved from 14th at the time of Mariner’s arrival to finish the season sixth. Better was to come in the next campaign as the Gunners topped the league into November 1984, where the Arsenal were a revelation playing some scintillating stuff, which many believed was the best the club had played since the 71 double side. 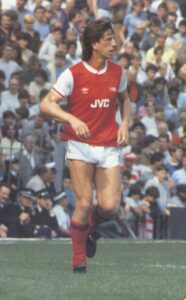 Mariner strolling around the Highbury pitch

But results faded and exits at Oxford United (a game Paul missed with injury) and York City in the cup competitions took the shine off the fantastic initial potential for the 1984/85 season. The next season he was blighted by an Achilles heel injury which saw him only play a handful of matches with his final appearance seeing him come off the bench against Nottingham Forest on 8 April 1986. Mariner left on a free transfer in August 1986 to Portsmouth having made 70 appearances and notching 17 goals for the Gunners.

At Portsmouth, though in his twilight playing years, he assisted the side into the top flight after a successful 1986/87, and consequently received a great reception from the North Bank on his return to Highbury in August 1987. However, the 6-0 drubbing the Hampshire side received did not auger well, and sure enough Pompey lasted only a season in the First Division before relegation back to the Second Division.

After 9 goals in 66 games for Pompey, Paul signed on for Naxxar Lions of Malta at the end of the 1987/88 season. He remained playing for the Maltese side for a number of years, commuting weekly from his home in Lavenham, near Ipswich, once a week to appear for the Maltese Premier League outfit. From the Summer of 1989 he would also go to the USA as player-coach for Albany Capitols, and later the San Francisco Hawks.

Keen to stay in football he coached at Bolton School but moved to America to coach youths in locations such as Arizona and Lake Placid, and also went worldwide to non-football nations such as Japan. He assisted at Harvard and New England Revolution before being appointed Plymouth Argyle manager during a turbulent off field time in  2009/2010. Mariner ended his stint over the Atlantic with a few years at Toronto after he left Home Park.

He also had a successful international playing career, scoring 13 goals in 35 England appearances in eight years, between 1977 and 1985, including the Euro 80 and World Cup 82 tournaments. 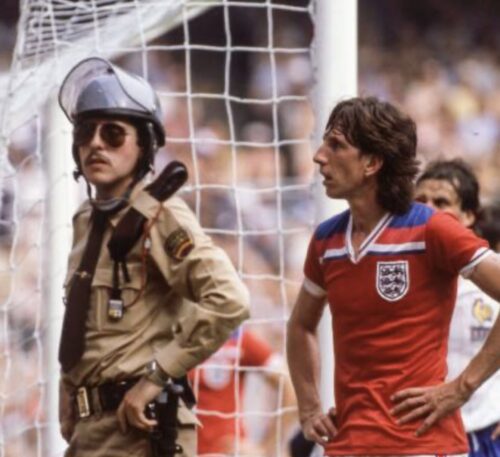 Mariner Strikes a Pose at the 82 World Cup Finals