Over Land And Sea And Lockdown: Arsenal 2020/21 by Darren Berry – Book Review

Book signing event at the Tollington before the Villa game on Friday 22 October from 16:00 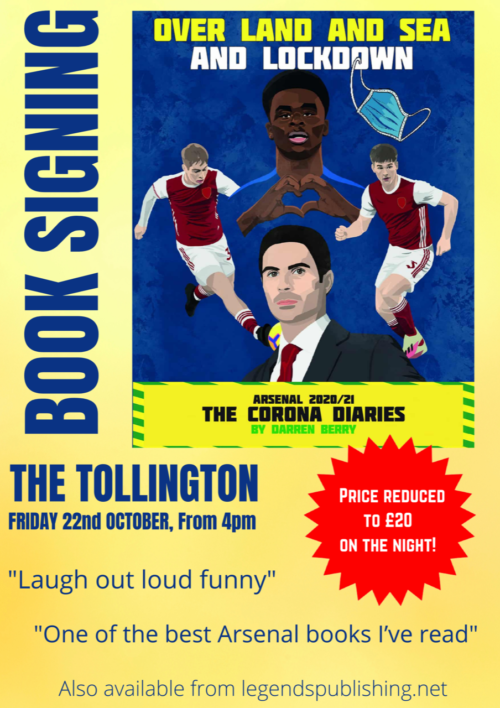 If you haven’t bought Over Land And Sea And Lockdown yet please do. It’s brilliant, Darren Berry is one funny f*cker and a great writer. I love it – Bam @ArsenalHomerton

I think the most applicable aspect of this short but highly accurate twitter review by a very happy customer, is the word ‘funny’. Now Darren may be many adjectives to those who know him, but primarily he is an amusing fellow with a clever turn of phrase and a reputation as Arsenal Twitter’s finest ‘fisherman’.

The theme of the book admittedly is not one of our finest seasons, but in many ways the football is often a sideshow as the effects of the pandemic on football took centre stage for much of the season. But given the unlikely subtext it’s done with a great deal of humour and tact. This is not just a football but a valuable historical document of the lockdowns and the pandemic. The Notes (1) and (2) below loosely list the football and lockdown events to which D. gives his own twists.

As the author says: “This season has been like no other we have experienced in our lifetime, as has the last 14 months or so in our lives outside of football… We’ve been lucky to have football to help us through it”  As you’d expect the football is intertwined with the recent pandemic and as much of the season was played out behind closed doors he captures the eerie nature of many of the games. Indeed not only is this a record of Arsenal’s season it acts as a very good reminder for a lot of what went on in society during that odd period. It doesn’t have the subtitle of ‘The Corona Diaries’ for nothing!

Near the beginning Darren is full of pathos when commentating on the 2020 FA Cup final: “The stadium may have been empty, but every one of us was there, and in some ways, Wembley Stadium was fuller than it had ever been.” This is a key moment in Arteta’s early career and colours Darren’s views on the manager all through the book.

It’s important to state this is a diary, not a heavily edited and hastily re-written review of the season. Each chapter/game is as Darren saw it at the time, not a retrospective. This style of writing is honest and does not suffer with hindsight, coming into play brilliantly and is highlighted in his various reaction to Mikel Arteta.

At the start he states “I always liked Arteta when he was a player at Arsenal, so that connection is immediate for me personally… I don’t know about you, but I will be forever grateful to Arteta for bringing us that FA Cup Final win back in August. This year has been one we will all want to forget, but he brought us one moment that we certainly won’t”.  However by April: “I am, however, finding it increasingly hard to keep defending him. Would he do the same for me if I kept making the wrong decisions at work? This is just my opinion, but I’ve seen enough to form the opinion that he can be a very good manager, I’m just not entirely convinced it will be at Arsenal.” By the Europe defeat to Emery he’s verging on summary and immediate removal, but steps back sensibly from the abyss, giving Arteta to Xmas 2021 as the only way to judge him, with a justification of this: “I’ve given Arteta plenty of chances myself this season, because he’s my mate, and that’s what mates do.” 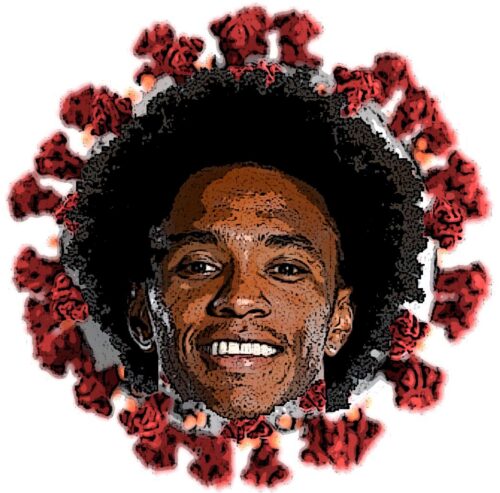 Intertwined all through the book are LOL moments, my favourite three aside from the ‘CoronaWillian’ picture are these diamonds, a mix of football quips and the bizarreness of TV during the lockdowns.

Showing a wide ranging hinterland, he veers into how Arsenal’s form affects your mood, and how the pandemic and Covid add to these feelings particularly after a shocker at home against Aston Villa. This is a really good segway of a short chapter, as Darren talks about the usefulness of Cognitive Behaviour Therapy. As well as everything else the book acts as a manual to keep your mental health in check with the splendid comment:- “Control the controllable and your life will be a lot more peaceful. If 2020 hasn’t taught you that already, I don’t know what will.”

He makes telling and insightful comments about football having an overwhelming emotional effect you weren’t expecting. We’ve all been at a game which meant very little in the scheme of things, where the celebrations were totally over board (obviously this was more prevalent during the terrace era) and at home too in front of the TV where the emotion takes over be it a goal, a sending off or penalty save as you are caught up in the moment. His moment in this banal season was a late equaliser against a soon to be relegated team – “I tell you what, though, I celebrated Eddie Nketiah’s equaliser – an 87th minute equaliser at home to Fulham – as if it were the winner in a Champions League final”

Modern fan media outlets are given no time, ignoring them almost entirely other than a few pithy sentences. Instead as befits a proper fan he conjures up memories, juxtaposing the sheer paucity of knowledge or experience of Arsenal amongst the media social media crew who think it good almost every game if Arsenal lose as it will mean the manager/player/whatever will leave the club. He goes into an evocative look to the not so recent past as a fan for whom the club is in his blood – such as being in the Clock End for the title win in 91, the humiliation of the Gus Caesar final at school next Monday, his family links or indeed non links to Arsenal, his lunchtime walks to Highbury from School, the Invincibles and so on…

Modern football gets the Darren treatment as he succinctly and very accurately states: “It never used to be this full on in the pre-internet world, we all had lives to get on with back then. You’d sit there at the game and have a good moan, moan on the way home, moan a bit more the next morning and that was usually it. That, however, is a world that no longer exists.” And he aptly describes the Champions League final between two participants of the Super League debacle: “It was only the other week that football supporters across the country were united in their stand against greed in football, now people are lauding the two clubs that, for me, are the epitome of everything that is wrong with the modern game.”

Overall this is a very upbeat account of mediocre football, a poor Gunners campaign reflected as his seemingly endless attempts to kick the writing into long grass became more comical the worse we became, at least until Christmas. And near the end he says:

When I began writing this way back in September 2020, I had no idea how this story ends. Now I do. No Europe for the first time in 25 years. If I’d known, maybe I wouldn’t have bothered, but that’s all part of what I’ve tried to do here.

It’s a good thing he persevered, otherwise we would have been denied this gem of a book.

(1) Arsenal season events:– Auba signs a deal, “I was worried if it may affect Auba’s form”,  Gunnersaurus sacked, Parteytime, Ozil offer to pay Gunnersaurus salary,  Arsenal rare win at Man U, Pay per view a thankfully short-lived and hugely misconceived idea from the media, Pepe’s headbutt; “The problems at Arsenal Football Club run very deep, it seems”,  potential relegation form up to mid December, pick up after Xmas including 5 consecutive clean sheets, Lost FA cup at Southampton juxtaposed with a march up the league, miracle of us getting a penalty from VAR when Pepe’s shot hit Ndidi’s arm and a Willian MotM performance in the same game at Leicester, Aubameyang dropped for the NLD, Redknapp and Jenas crying over the March NLD, just after we got through to the QF of Europa League the pure TV gold of Dynamo Zagreb beating Spurs in Europe, subsequent Twitter laughing at Jenas, European Super League starts up, European Super League closes, Kroenke Out Protests and Glen’s iconic photograph of the flares lighting up the protestors, losing in semi final to Emery, Big Sam relegated by us, Roy Hodgson final game against us, Arsenal  don’t qualifying for first time in 25 years into European competition.

(2) Pandemic details: including Lockdown 2 – and parenting skills, a few games at home with small crowd in December, prescient comment “winter is upon us, and a second wave of COVID-19 looms ominously on the horizon”. Xmas ending up a damp squib at home, the end of February when the ‘Roadmap to freedom’ was first announced by Boris, the ‘new normal’, a heartfelt review of anniversary of first lockdown in March, a common sense talk about the roadmap return to school for children in March “but I think the kids getting some kind of normality back in their lives is one of the most important stages of this roadmap. Yes, even more important than me having a pint”, pubs opening in May near the end of the season, his subsequent visit to the Famous Cock, Emirates used as a vaccination centre, epilogue of “Freedom Day” as restrictions are lifted a month late in July, DB gets his second jab.

The book is available to purchase from Legends Publishing Just click on the link. 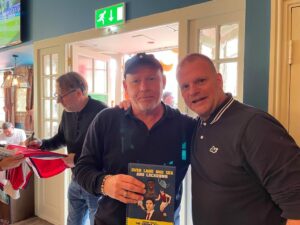