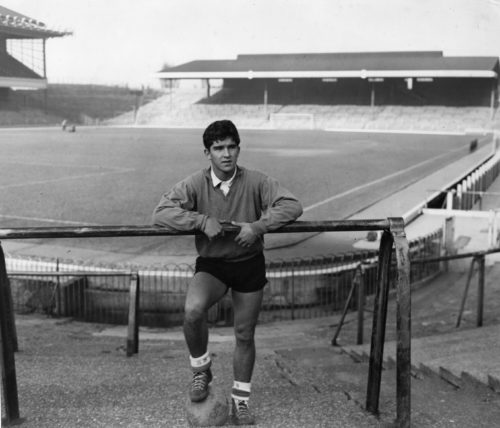 Reverse of the press photograph above.

A teenager who trained at Highbury playing in the youth and ‘A’ teams during Billy Wright’s time as manager.

Born on 10 January 1949 in Czechoslovakia, soon after his birth his family fled Communist rule and consequently Branko spent his childhood in Spain where his father Laszlo Kubala played famously for Barcelona. The son of one of the world class players in the 1950s he was given training at Arsenal by Billy Wright as a favour to Laszlo, part of Branko’s footballing apprenticeship which had also included spells with Milan, Barcelona and Espanyol.

A forward, he appeared for Arsenal in four matches, scoring once. His first game was in a youth team friendly on 14 January 1965 in which he scored, and the other three, a few weeks later, were for the ‘A’ team between 30 January and 13 February alongside Peter Storey and Bob Wilson, but did not score in any of these ‘A’ team Metropolitan League games.

Later that season he made his Spanish debut for Espanyol on 3 April 1965. At the age of 16 years 83 day it is still a Spanish top flight record for  youngest debutant, but after a string of clubs, in Spain and the USA where he played in the inaugural NASL season with Toronto Falcons. Unable to live up to the brilliance of his father he left football in 1973 aged 24 .