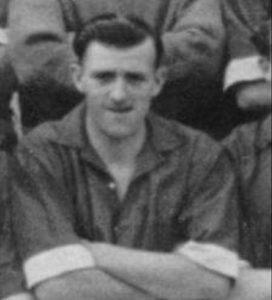 A reserve and ‘A’ team forward just after the Second World War in Tom Whittaker’s reign as manager.

Born on 5 June 1927 in Chirk, Wrexham, Wales, Edmund played for Chester Reserves and Chirk, and was spotted by former Gunner and fellow Welshman, Ehud ‘Tim’ Rogers in June 1948.

Signed as an amateur by Arsenal on 28 July 1948, he became a professional on 30 August of the same year. An outside left or centre forward while at Arsenal he had previously done his national service as a “Bevan Boy” miner in the Welsh pits.

For the Gunners he scored twice in 12 reserves appearances goals, and netted 16 times in 38 ‘A’ team games.

Just before the FA Cup final win at Wembley, he was on his way to QPR on 26 April 1950. He spent one season at Loftus Road where he played just one first team game, against Brentford in the Second Division, in which he scored one goal. During the summer of 1951 he moved to Crewe where he stayed for one season, playing in seven league games, before moving back to Wales with Oswestry Town with whom he won the Birmingham League in 1952-53.

Eddie Davies was then tempted back over the border by Nuneaton Borough but sustained a bad injury in a game against Lye Town in January 1954. The injury forced him to retire in January 1955. Whilst at Nuneaton he worked for the Midland Sheet Metal Works as a sheet metal worker. Following his retirement from football he worked for Heinz at one of their factories. 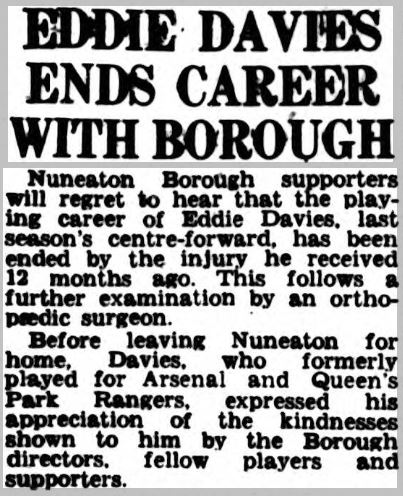 Many thanks to Paula Evans for providing additional material for Eddie’s obituary.