The Ball That Goalkeeper Frank Moss Scored Against Everton 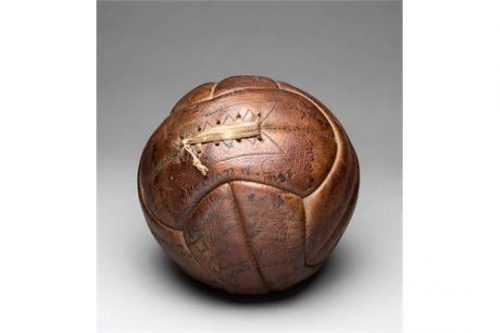 On 16 March 1935 league leaders Arsenal travelled to Goodison Park, Everton for a First Division game. For one man it was to be a bitter sweet afternoon as, while he scored an unexpected goal, his football playing career was essentially ended on that day.

With the game scoreless, Frank Moss dislocated his shoulder after half an hour so badly at that he had to be replaced by Eddie Hapgood in goal. He left the field of play and received treatment in the dressing room from Tom Whittaker. To most people’s surprise Moss came onto the pitch at the start of the second half wearing a red shirt. At that time there were no substitutes allowed in English football, not even for severely injured players. He took up his place on the left wing with his injured arm strapped to his side, ensuring that the title chasing Gunners continued the game with a full complement of players. 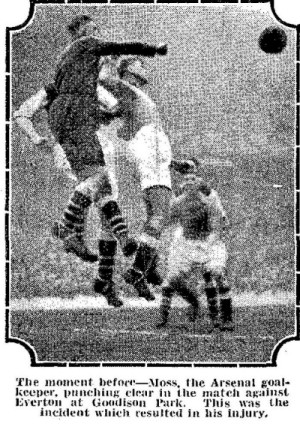 This was not the first time he had been injured and replaced by Hapgood in goal while he was moved to roam the left touchline. In the closing stages against Sheffield United in December 1933 he dislocated some fingers and while on the wing almost scored at Bramall Lane. But this time he surpassed expectations and scored in the 2-0 win over Everton.

Drake scored the first with a long range pile-driver past Ted Sagar in the first half, just six minutes after Moss had left the field. In the second half, Arsenal’s re-arranged defence held firm with Hapgood making a number of exceptional saves, and then Moss, who showed a surprising fleetness of foot, latched onto a pass from Drake and buried the ball into the Everton net in the 70th minute.

The reports said that even the Toffee fans applauded his goal, as he was mobbed by his excited team mates. Shortly after the goal he left the field in agony as the injury flared up again. He was taken to hospital after the game and had his shoulder reset.

Moss had up to that point in the season been an ever present in goal, but this injury, which turned out to be a double dislocation, meant his place for the remainder of the title winning season was taken by Alex Wilson.

The ball was presented to him once it had been signed by all the players who took part in the game as a memento for his rare achievement.

Moss had an operation on his shoulder and damaged arm muscle in August 1935 in a Newcastle hospital. After playing four games in the reserves, he returned to the first team on 28 December 1935 when he appeared in a classic game that Sunderland just shaded 5-4 at Roker Park. His shoulder lasted only another seven games, until 8 February 1936, when, against Blackburn, it was dislocated again requiring remedial resetting in a Blackburn infirmary, and the specialist he visited in Newcastle advised resting for the rest of the season. However as it transpired he was not to play again at that level.

This second dislocation had brought his goalkeeping career to an end, and Alex Wilson kept goal in the 1936 FA Cup final. George Allison obviously believed that Moss could still play a part for Arsenal as he was tried on the wing in three reserve team friendlies during the first half of the 1936‑37 season. Despite scoring in the first two games it was decided that it wouldn’t make it and he had to retire from playing. 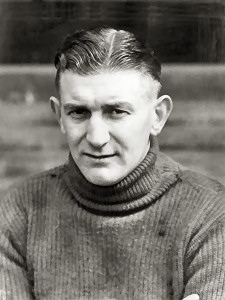 After almost the entire 1936-37 season in the Highbury wings being mentored for a leader’s role he left Arsenal when he was appointed manager of Heart of Midlothian on 1 March 1937. Moss had retired from playing at the premature age of 27.

Frank remains the only Arsenal goalkeeper to score a goal during normal time in a first team game but one other goalkeeper has scored a goal for the club. In October 2003 Arsenal were held to a 1-1 draw by Rotherham United in the League Cup at Highbury. The penalty shoot seemed like it was never going to end, with the teams taking 22 spot kicks in total. Number 19 was taken, and converted, by Graham Stack who then took his place in goal and saved the following penalty, turning the shoot-out on its head resulting in an Arsenal win.

The ownership of the ball has changed hands several times since it was given to Frank. Most recently, it was sold at auction in London in May 2015 for £4,500.