The Architects plans for Highbury 1913 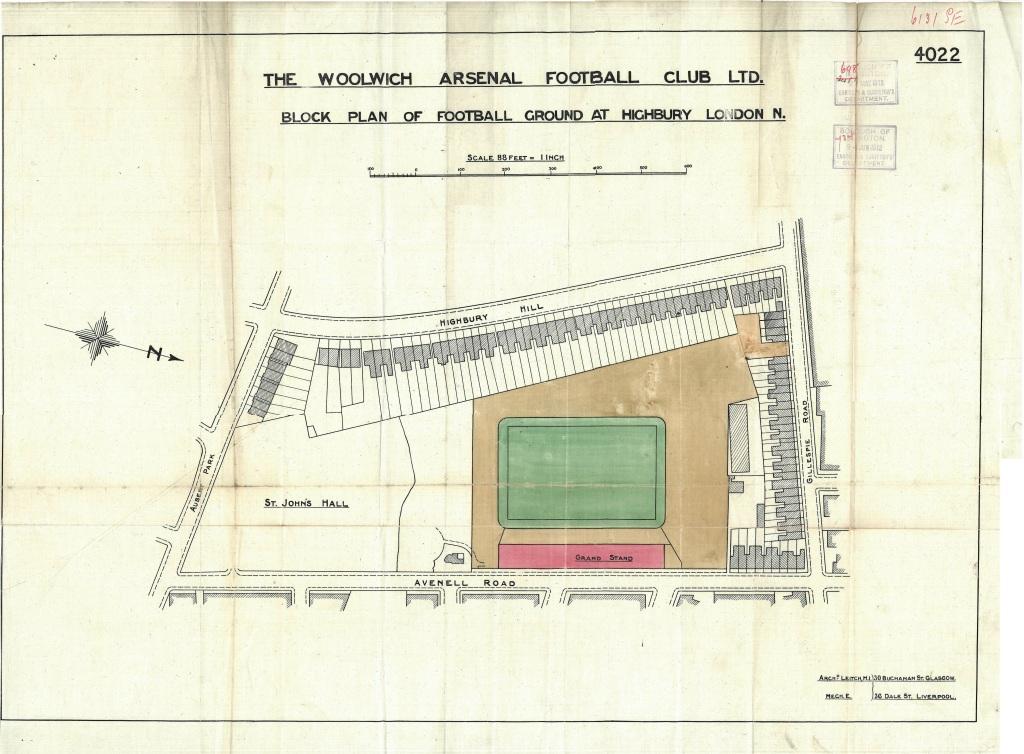 These block plans sat in a dusty file for over 100 years until put up for auction in a  general sale of various aspects of a member of the pre WW1 Islington planning dept.  Stamped as being received by the Islington Engineering and surveyor’s department on both 22 May and then 9 June 1913.

The plans are a very basic statement, but are immediately recognisable as the footprint for Highbury to any fan. It is the beginning of the club as a force in football!

In 1913 Woolwich Arsenal moved from Plumstead to Highbury. It was a move masterminded by Henry Norris and William Hall, joint owners of the club, who could not continue to pump money into the moribund enterprise at Woolwich and found a suitable piece of land in North London. Norris and Hall knew the Gunners had great potential, but would need to move to a site with better transport links and wider catchment area

The site identified was the sports field of St John’s College of Divinity in Highbury. While Norris had found the site in November 1912 it was kept under wraps until the press got wind of it on 22 February 1913, and after the league had sanctioned the idea Norris officially announced the new ground location. This was on 4 March 1913 where all the directors of Woolwich Arsenal FC held a dinner at the Connaught Rooms in Holborn to which the press were invited.

They signed a lease with St John’s College of Divinity the owners of the land who on the plans are shown as St John’s Hall. The £20,000 price for a 21 year lease was welcome income for the Church body and Arsenal did not purchase the ground outright until 1925 when they paid £64,000 to secure Highbury in their own name. 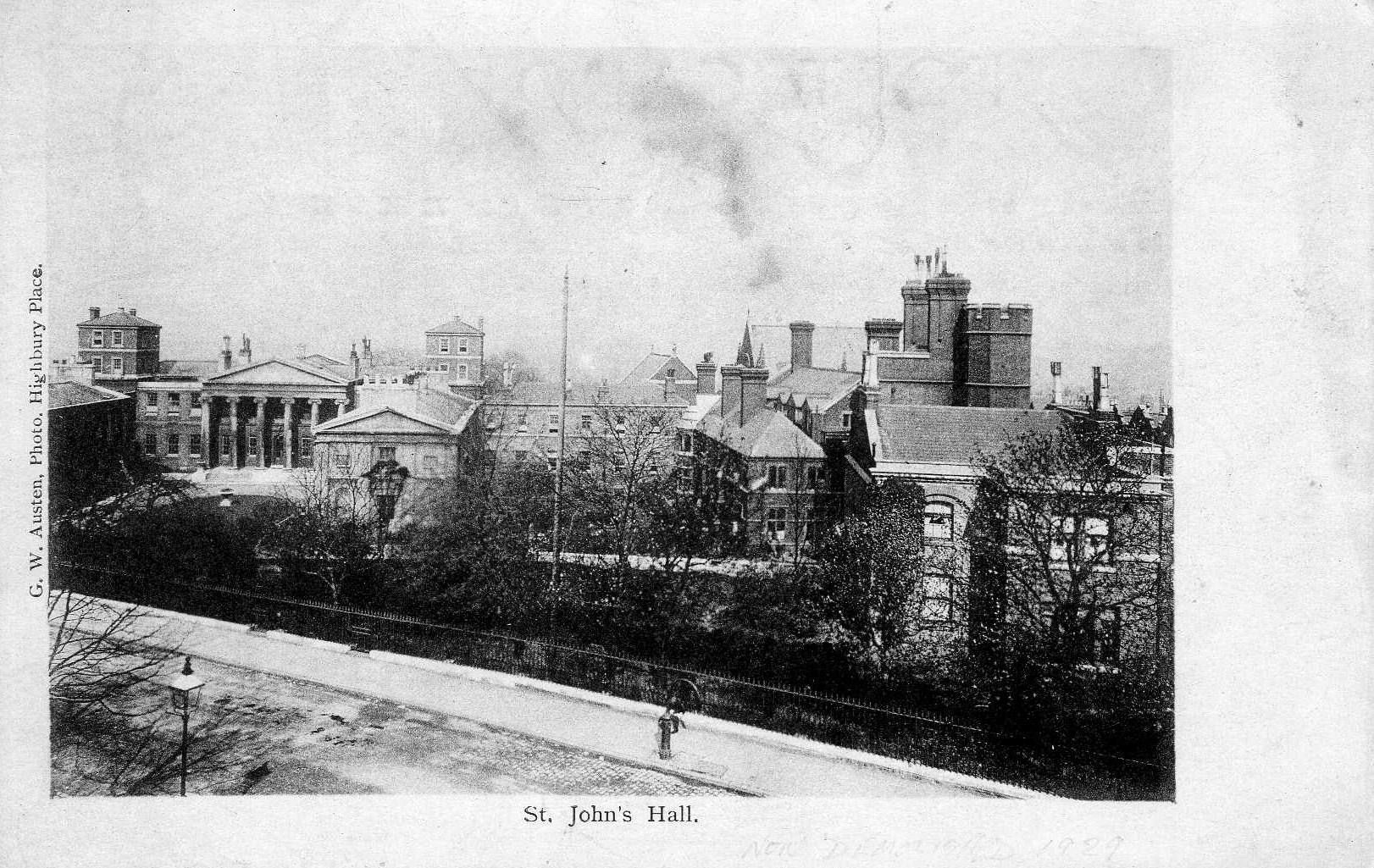 On Mon 26 May 1913 the first AGM of the Football League since Woolwich Arsenal’s move was held and on cue the representatives of Tottenham Hotspur and Clapton Orient attempted to change the rules about club locations. However their protests fell on stony ground and the move was confirmed again!

In addition to the nearby football clubs some local residents objected, but the move went ahead anyway and on 28 June 1913 Woolwich Arsenal gained possession of the Gillespie Road site. 19 days after the plans were logged into the Council department.

The architect was famous football ground designer Archibald Leitch. He was known to the club as far back as 1904 when he was commissioned to rebuild the South Stand in the Manor Ground, Plumstead. However, when Norris and Hall took over the club in 1910 it became evident that he was still owed over £1,000. They paid him in 1910 and kept up the relationship utilising his services three years later. 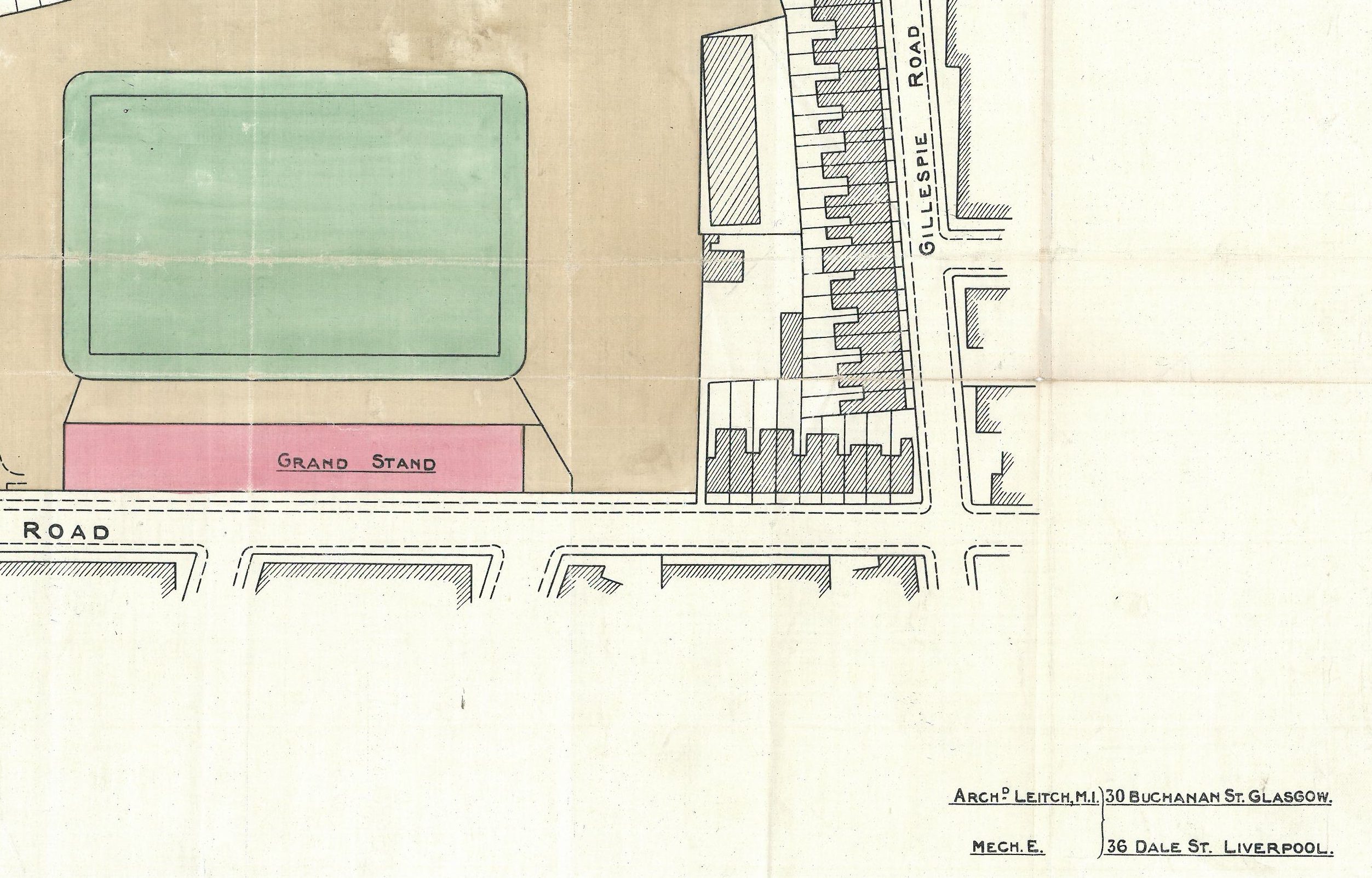 However, the design of the Grandstand (as shown in the photo below from 1919) on the East side was quite atypical for Leitch. It was a 2 tier stand with a multi span roof consisting of nine gabled fronts. 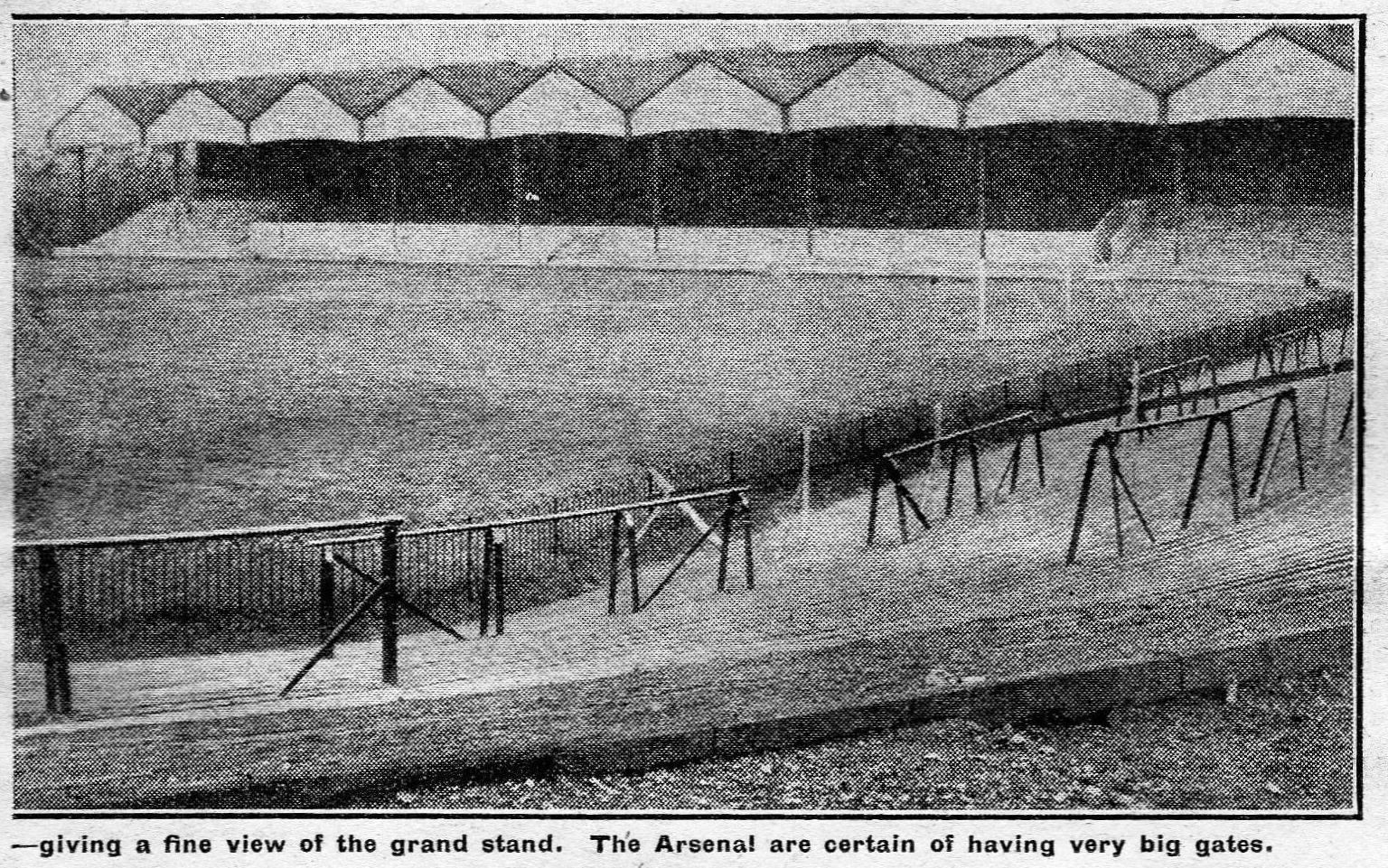 Alfred Kearney, Leitch’s representative on-site, was in charge of the building project which seemingly consisted of delay, bureaucracy and more delays over the summer as the work to flesh out the plans was constantly behind schedule. In order to keep out of the workmen’s way, the squad trained at Fulham and Millwall.

The first league game was played on 6 September 1913 against Leicester Fosse. It was a truly incredible feat to get Highbury ready for League football played in a stadium, on what was essentially a field only ten weeks earlier, albeit with an unfinished, roofless Grandstand and three rudimentary mud-based terraces. 20,000 attended mostly standing on the three terraces and benches were placed within the frame of the basic stand for the game.

As it was the Grandstand was not finished until near the end of this season. This stand was built by the steel and iron-framed-building specialists Humphreys Limited, who had a world-wide reputation. Arsenal agreed to pay them upfront in cash and guaranteed a proportion of the gate money until the debt was paid off; they also insisted that Hall and Norris personally act as guarantors of the full amount payable, in the region of £50,000.

The club retained the Woolwich Arsenal name until 4 April 1914 when the Football  League approved of their new name: The Arsenal. But it was not until over a year later that the club’s official name was changed with the Board of Trade and Joint Stock Companies to “The Arsenal Football Club, Limited” on 10 May 1915.

With thanks to Dan Mac.