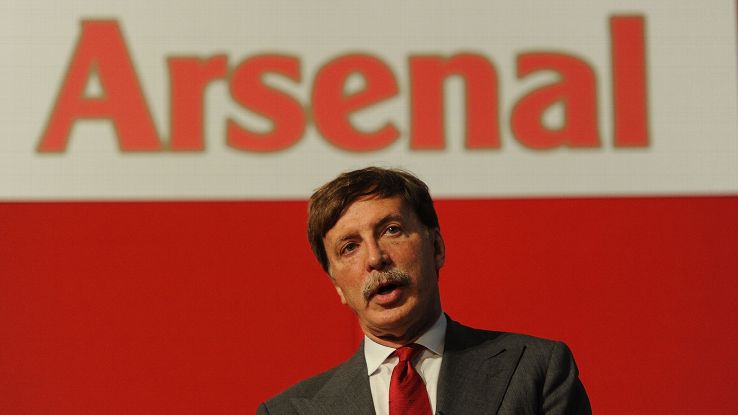 Before we get going, note that all percentages quoted in this blog are a proportion of the number of Arsenal FC shares available to be traded. At various times during the club’s history shares have been authorised, but until the 1980s there was no queue of people wanting to invest, and not all the authorised shares were issued and available to be bought and sold.

Firstly, a bit of history to give you some background to how Arsenal Holdings PLC came to be the parent company of The Arsenal Football Club PLC with 62,219 shares issued.

Back in 1893 the members of Royal Arsenal FC voted to form a limited company of 4000 shares to fund the development of their new ground, the Manor Field. As it wasn’t possible to use the word “Royal” in the name of a limited company they decided on the name: The Woolwich Arsenal Football and Athletic Company, Limited.

Towards the latter half of the first decade of the 20th Century, the club struggled financially. In 1910 the shareholders put the club into voluntary liquidation and formed a new limited company of 7000 shares. Not all of these shares were issued or sold immediately, and indeed the club had trouble raising funds by the sale of shares for quite a few years.

The two biggest shareholders at the time were Henry Norris and William Hall who had each owned 240 shares from the initial 1910 issue, then gradually increased this number in the following years, right up to Norris’s exit from the club in 1927. In 1926 Norris owned 412 shares and Hall 414, though his daughter had an additional 81. In fact even at the time of Norris’s death in 1934 there were still 477 shares in his name. Norris and Hall were also active in bringing other investors into the club. The most significant of these in the long term was Sir Samuel Hill-Wood who joined the Board in 1923. Norris and Hall were both keen to maintain plurality of ownership, and at no point until 2011 did any one shareholder own more than 50% of the club’s shares.

In 1938 Sir Bracewell Smith joined the Board and the Hill-Wood and Smith families remained synonymous with Arsenal Football Club until fairly recently.

Fast forward to 1983. At this point, only 5839 of the authorised 7000 shares were in issue, available to be traded. Enter David Dein. He offered to buy the 1161 unissued shares for £290,000 to which the board of directors agreed. Shortly afterwards, Dein joined the board and became vice-chairman. In 1985 the board of directors and their shareholdings were: 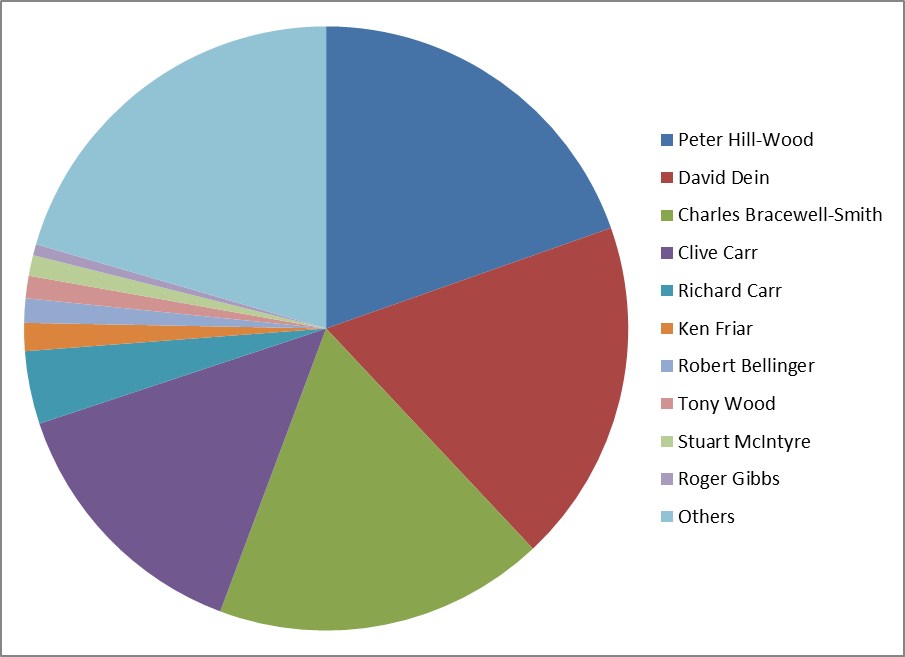 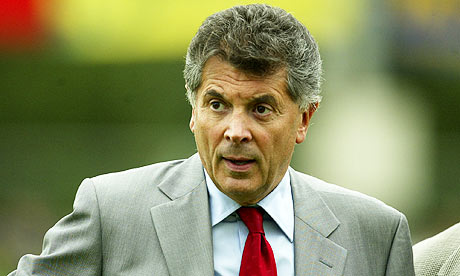 In 1991, an “8 for 1” share split took place. This is sometimes referred to as “7 for 1”. This means that for every 1 share that was held before the split, 8 would be held after the split. This resulted in 56,000 shares now being issued and available to trade, and the share value was reduced to around one-eighth of that before the split.

There was also a major share transaction which saw David Dein buy more than 10,000 shares from Peter Hill-Wood which made him the largest shareholder in the history of the club thus far. The directors now had the following shareholdings: 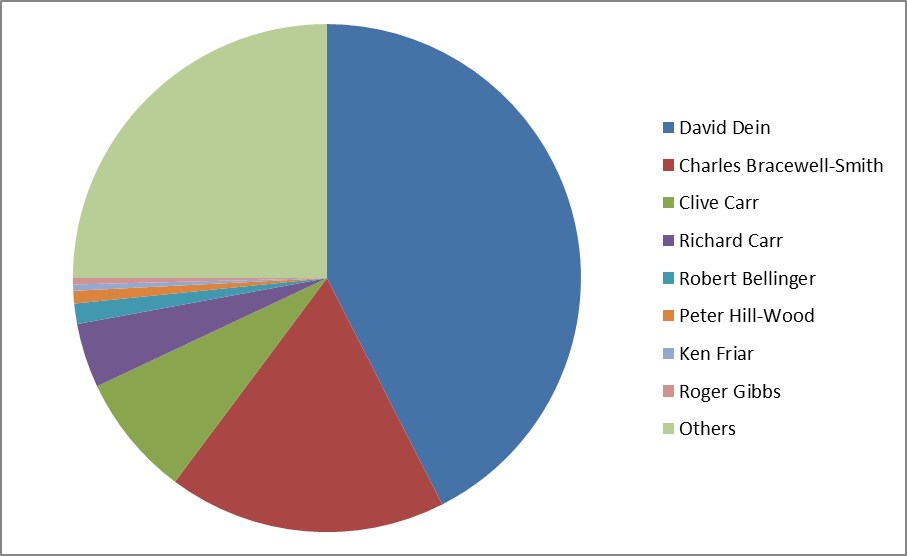 The club was also re-registered as a public company and became known as The Arsenal Football Club Public Limited Company.

The following year, there were two major changes. Richard Carr acquired approximately 7700 shares to take his holding up to 9992 (17.84%), and Danny Fiszman appeared on the board. He held 10080 (18.4%) shares, which he acquired in 1991 or 1992. We believe that originally his shares were in joint ownership with David Dein, but over the next 9 years Dein sold parts of his stake to Fiszman in several tranches, until Fiszman eventually overtook him as the biggest shareholder. 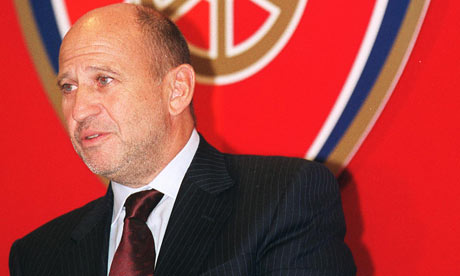 Total shares now authorised: 62217, plus the 2 subscriber shares held by the club. 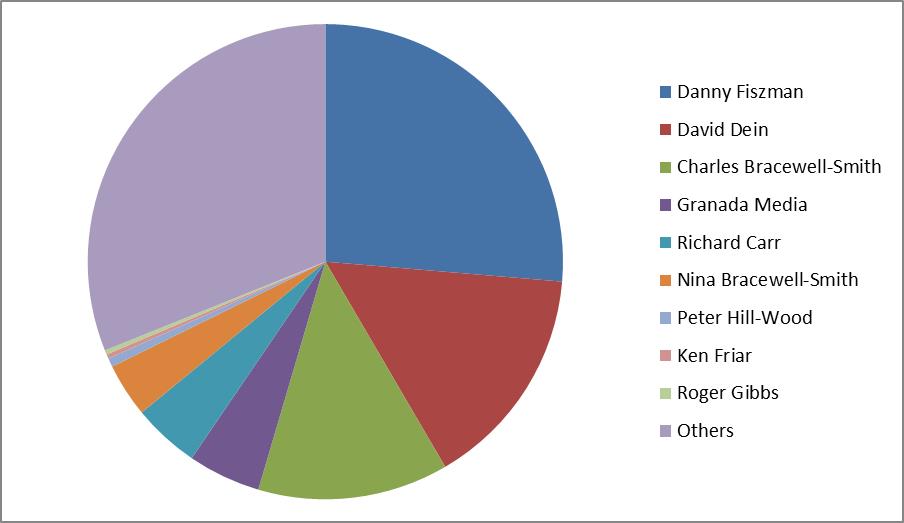 Around 2003, Charles Bracewell-Smith signed over the rest of his shares into his wife’s name. Nina Bracewell-Smith became the club’s second biggest shareholder with 16.8%.

In May 2004 the Directors and other shareholdings were these: 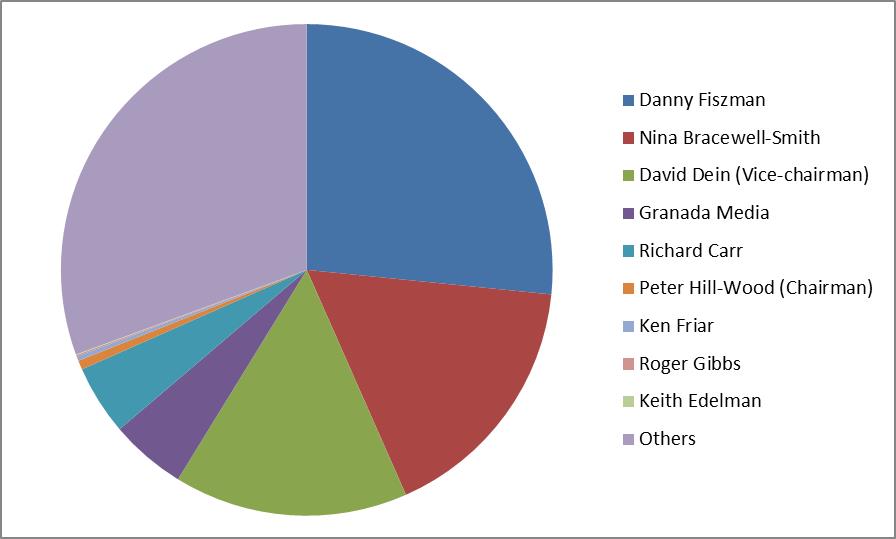 Keith Edelman’s shares were actually owned by Danny Fiszman, with Edelman holding them as a nominee. The Board at the time considered that all Directors should be shareholders in name at least, an attitude that has changed in more recent years.

Due to an oversight in the maths when the additional shares were authorised in 2001, Granada had to leave one authorised share unpurchased, to prevent them reaching 10%. At 10% they’d have been considered a ‘major shareholder’ under Premier League rules, and been unable to hold shares in any other Premier League club. The single unissued share was sold to the Arsenal Supporters’ Trust for a nominal fee in 2007, with the support of all the Board at that time.

In November 2005 Lord Harris of Peckham and Sir Chips Keswick joined the Board, with each of them holding just a few shares at the time – in fact Keswick held none before he joined, then acquired 20, while Harris had 40 already and increased that to 53. However, by summer 2006 there was no major change in the bigger shareholdings.

But things were about to change: two rival billionaires both became interested in Arsenal, and a battle for control of the club was about to begin…

One thought on “Where Did Stan Kroenke Get His Arsenal Shares From? – Part 1”