At this stage Kroenke was still not welcomed by the rest of the Arsenal Board, who considered Dein had gone behind their backs. This was one reason for a falling-out between old friends Dein and Fiszman. As a result Dein was dismissed from the Board of directors in April 2007.

As a parting shot to Dein and his intentions, Peter Hill-Wood famously said: “Call me old-fashioned but we don’t need Kroenke’s money and we don’t want his sort.”

Meanwhile Alisher Usmanov had also become interested in Arsenal. He formed Red & White Holdings (R&W) with his business partner Farhad Moshiri, and Dein decided to throw his lot in with them. In August 2007 Dein sold all his 9,072 shares, a 14.6% stake, to R&W and was made chairman of the company and became its public figurehead. R&W started actively buying shares in the open market and by the following May R&W had acquired 13,076 (21%) of the club’s shares. This included 2.7% from hedge fund Lansdowne Holdings. (By this time Dein had resigned his position in R&W, claiming it was to improve the chances of the Board talking to Usmanov.)

Following Dein’s sell out to R&W, the Arsenal board were concerned that they would be subject to an unwelcome takeover bid.  To counteract this, they all agreed to a “lock down” which meant that they would not sell their shares except to “permitted persons” such as close family before at least April 2008; they later extended the period to April 2009 and agreed that the other directors would have first option for any shares sold before October 2012.

In an about face, the Board who’d sacked Dein for consorting with Kroenke now invited the American in. This was at least partly an attempt by Fiszman to make sure that Dein would never be able to return. Stan Kroenke joined the board of directors in September 2008, shortly before the extended lock down was announced.

However, a further change saw Lady Nina Bracewell-Smith sacked from the Board in December 2008. A number of different statements have been made by different parties as to why she was invited to join in 2005 (her husband had never been a Board member when the shares were in his name) and why she left. For our purposes what matters is that the 15.9% of shares she controlled were now not represented on the Board, and if she chose to join forces with Usmanov in R&W this could force a takeover bidding war. Lady Nina at this stage decided to remain unaligned to either the Board or R&W.

The situation stabilised for this period while Kroenke (under the banner of KSE UK Inc, which is wholly owned by Stan Kroenke) and R&W spent two years increasing their stakes. In 2009 Kroenke bought 5,000 shares from Fiszman, 4,790 from the Carr family and a further 160 shares, probably from Peter Hill-Wood and his family, which took his holding up to 28.58%.

By early April 2011 KSE held 29.99% of Arsenal, stopping just short of the 30% figure that would force Kroenke to make a general offer for all shares. At the same time Red & White amassed 27% by targeting non-Board shareholders with holdings of any size from one share upwards. Both KSE and R&W were now primed for an obligatory takeover bid, though clearly Kroenke had more support from the other major shareholders.

On 11 April 2011, Stan Kroenke took control of Arsenal Holdings. He became the first person in the history of the club to own a majority of the shares. To add to his holding of 18,656 (29.99%) shares he bought the following:

This took KSE to just over 62% of Arsenal, easily enough to take control. R&W immediately announced that they weren’t selling, and with their own stake close to 30% it prevented KSE getting to either 75% or 90%, which would give Kroenke powers to make changes to the company structure.

The 2011 accounts show a fee of £3,077,000 explained as “Costs of takeover transaction” paid to Rothschild. A note below explains: “The costs of the takeover transaction relate to professional advice to the Company in connection with the offer and share acquisition whereby KSE UK Inc. acquired a controlling interest in the shares of the Company.” In other words the Board spent over £3m of Arsenal’s money to receive advice that they should sell their shares to a member of the Board. None of the Board members at that time had put any money into the club, but saw no problem with using the club’s money – provided by supporters – to receive advice that allowed them to make millions of pounds, or tens of millions in some cases, from the sale of their shares. 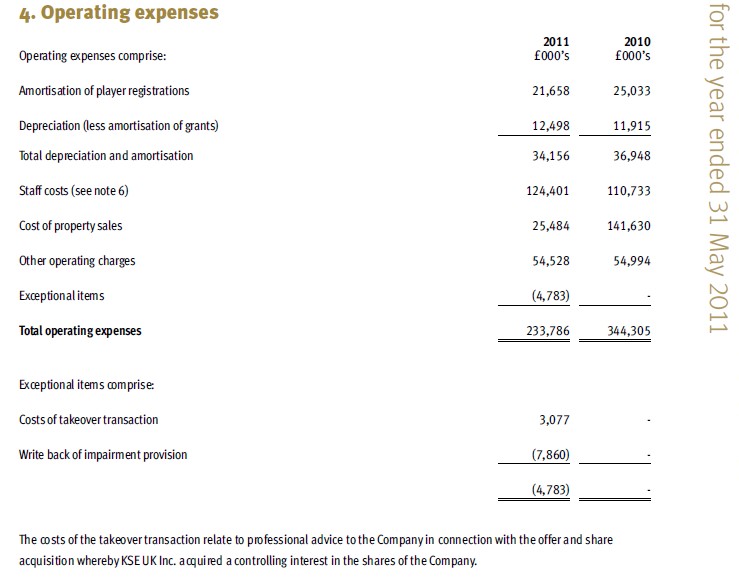 For the record, the only shareholders who have put money into Arsenal in the last 50 years have been David Dein and Granada, who both bought previously unissued shares. All other purchases were of existing shares, and the money therefore went to existing shareholders. There is a story that Danny Fiszman put money into Arsenal in the mid-1990s that helped fund the purchases of David Platt and Dennis Bergkamp. We’re not totally sure how this story started, but Tony Adams has certainly put it forward as a reason for Arsenal’s late-1990s recovery. However, it’s completely untrue – the published accounts show that Fiszman put no money into the club itself. Arsenal’s finances improved as gate money rapidly increased at the same time as Sky started pumping money into the game.

Back to the story: two days after Kroenke’s takeover was announced on 11 April 2011, Danny Fiszman died from throat cancer.

Fiszman knew by early 2011 that he was so ill that he would not recover, and his family had never shown any sign of wanting to be involved with Arsenal.  With two billionaires vying for control, he had to choose a buyer for his shares and steer the rest of the Board in what he thought was the best direction. Was his main motive in selling to Kroenke rather than Usmanov to protect the long-term future of Arsenal or was it just to keep David Dein out of the club? We’ll never know.

Kroenke and Red & White continued to increase their shareholdings in small amounts, although the latter have bought no shares since June 2014. There was a change in ownership of R&W in February 2016 when Usmanov bought Moshiri’s share of Red & White and, thus took control of all of the shares held by that company.

Today Stan Kroenke owns 41,698 shares in Arsenal Holdings, 67.02% of the total. These were purchased from: 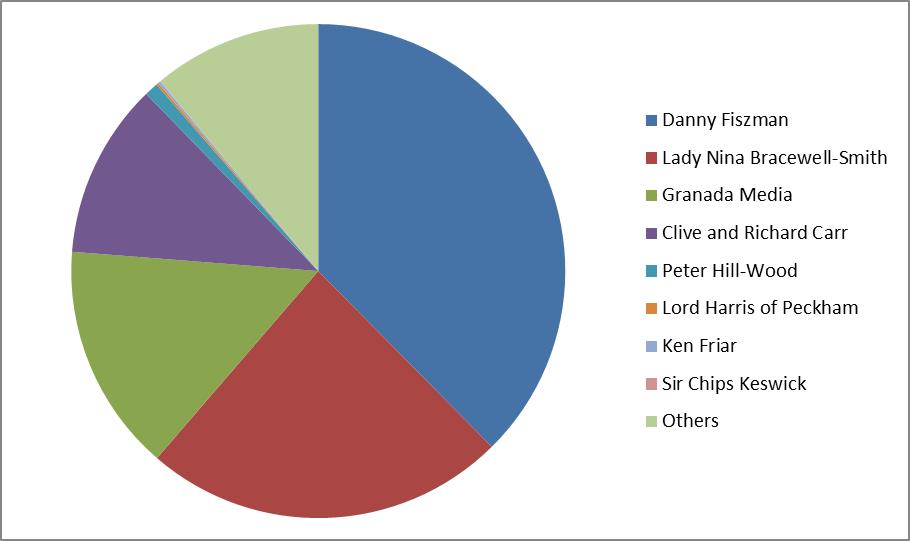 The number of shares held by anyone other than KSE and R&W is now less than 3%. Neither Kroenke nor Usmanov seem to be prepared to sell any shares. After several years of fairly frantic activity the situation has now settled into an ownership stalemate. It could be many years before this changes.

Phil Wall’s blog has many reference articles on Kroenke, Usmanov and the ownership situation at Arsenal.

If Kroenke sells his stake, how much profit does he make?

9 thoughts on “Where Did Stan Kroenke Get His Arsenal Shares From? – Part 2”