On Friday 22 May I received a surprise invite to Arsenal’s FA Cup media day on 27 May at the club’s training ground. I didn’t need too much time to consider whether or not I would be attending! This is my story of the day.

The itinerary stated that the first event would be Arsene Wenger’s press conference at 9am. I arrived about 20 minutes before this and was pleased to see some familiar faces in Tim Stillman and Goonerholic. Shortly after, Dave Seager and Darren Berry (a fellow warbler on the Arsenal unofficial 2015 FA Cup final song) turned up to form a quintet of bloggers. 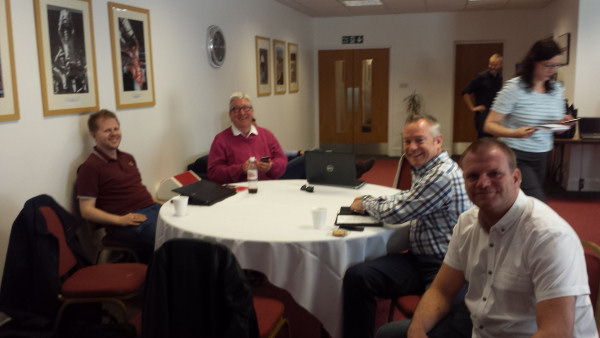 Someone to talk to during the quiet moments

With it being the prelude to the FA Cup final, the media were out in full force. I’m not an avid follower of the media so didn’t recognise all them but John Cross, Neil Ashton, James Olley and Amy Lawrence were definitely there.

Arsene came in a bit later than billed and answered all of the questions thrown at him, even one about the breaking news of the FIFA arrests. Why on earth someone decided to ask the question when the day was centred around the FA Cup final was beyond me. 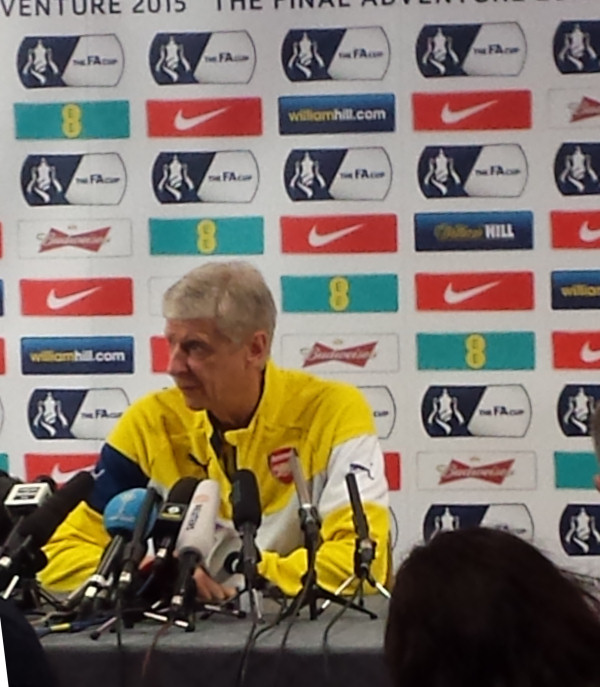 Unfortunately, not being one of the top boys we had to stand at the back and it was difficult to hear the questions and Arsene’s answers. However, these can be seen and heard on the Arsenal website as well as Goonerholic and Gunnerstown. Communications director Mark Gonnella tried to call a halt to proceedings but, as I believe is usual, Arsene just continued to carry on answering questions. When Arsene finally decided he needed to go and do his proper job, everyone took to their laptops and wrote up their version of events. 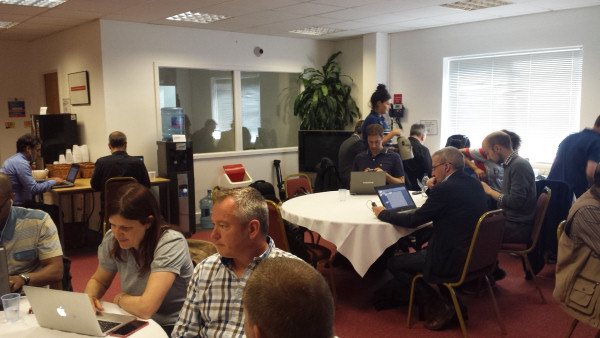 We then made our way to one of the training pitches where we treated to about 15 minutes of the players being put through their paces. A couple of Invincibles were also in attendance. Martin Keown was there to watch. 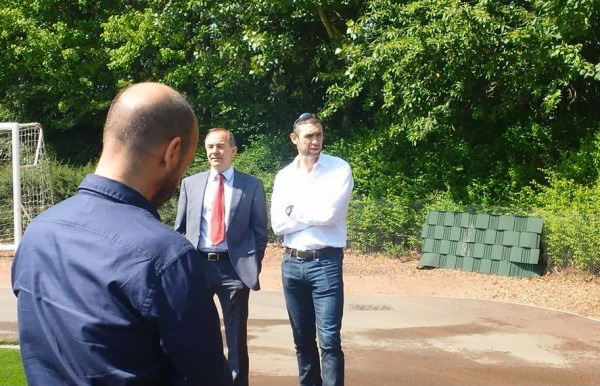 The players came out in three groups. First it was the goalkeepers.

Followed by the central defenders who had a game of keepy uppy.

Then the rest. Can you spot the other Invincible?

They then started their warm up which looked like an audition for the Ministry of Silly Walks.

We were then ushered away so that the players could get on with the serious part of the session. We were given a brief tour of the undercover all-weather pitch which would be used later in the day by the media for player interviews and promotions. 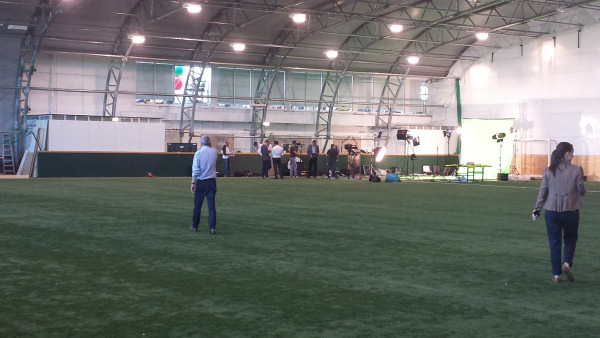 The BBC’s set up

We then returned to the media centre for interviews with three players. There is an embargo on the content of these interviews so I can’t report on what they said. Goonerholic, Tim Stillman and Darren Berry will all be writing reports on the interviews, so check their blogs over the next few days. First up was Mathieu Flamini. He is incredibly articulate, spoke in perfect English and very measured with his answers. 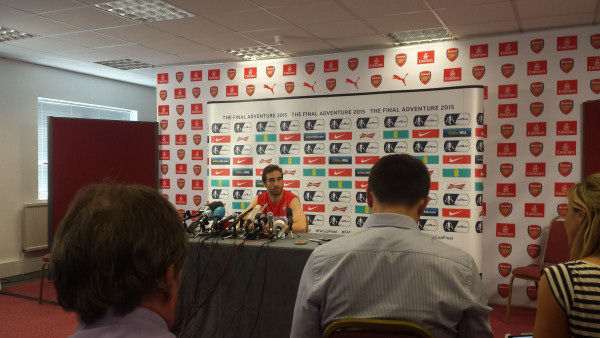 Then came the captain with his hair as immaculate as ever. 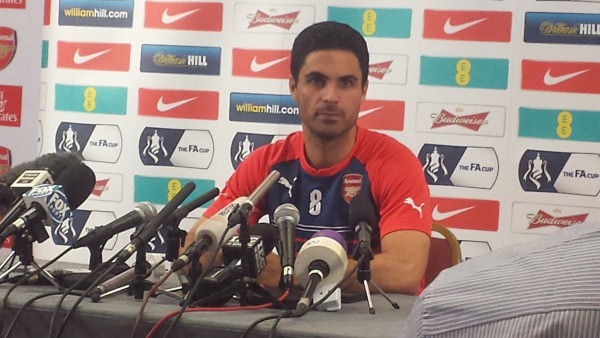 And finally, the hero of last year’s final who made the day for the Welsh reporter sat in front of me. 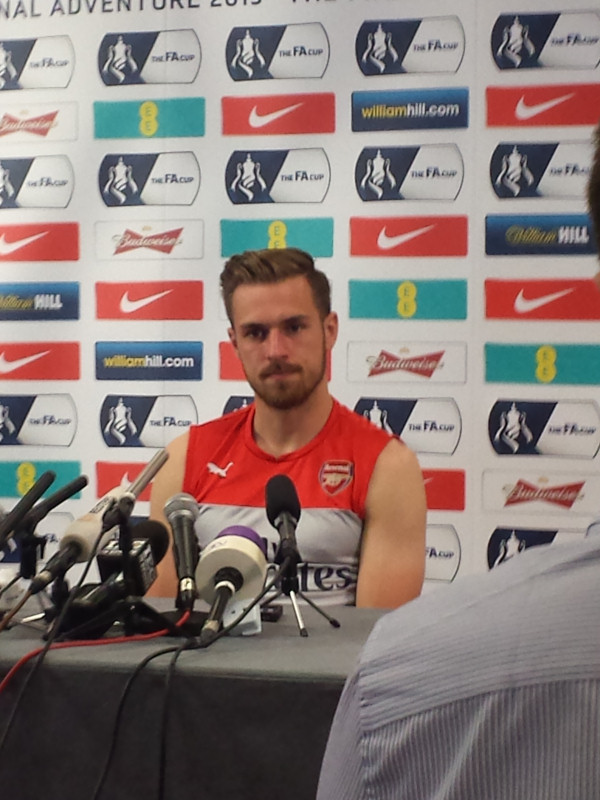 And that was it. We made our way back to our cars, bade farewell to each other and set off for home. I followed Theo Walcott out of the car park. He lives about a mile away from me but I suspect that he got home well ahead of me.

All in all a unique day for a non-journalist and something that I felt very honoured to be involved in.

If you want to really get into the right mood for the FA Cup final then you can download the (un)official Arsenal 2015 FA Cup final song. It’s for a good cause, so well worth 79p or 99p. For full details, click on this link.

One thought on “The Arsenal FA Cup Media Day”