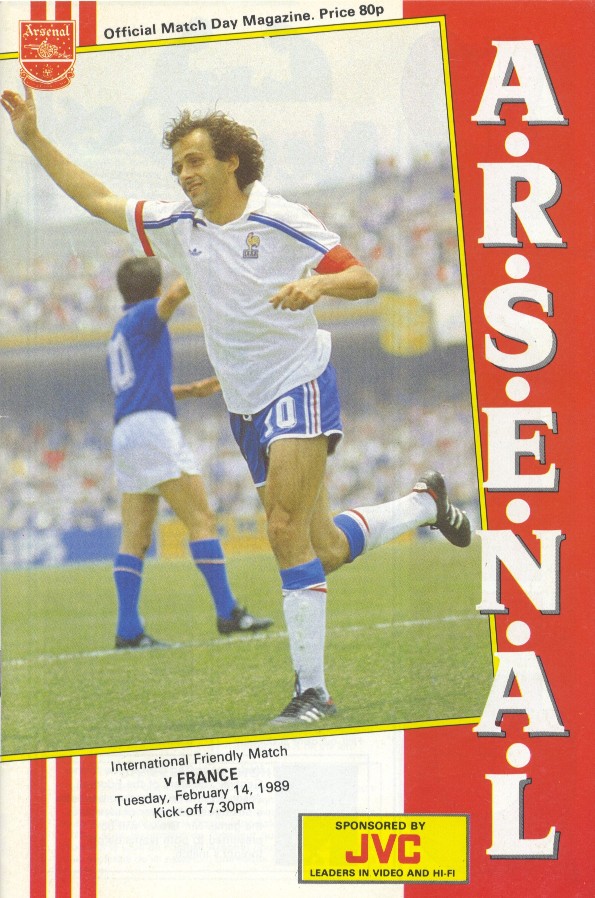 This friendly game was arranged between George Graham and Michel Platini, the respective managers of Arsenal and France. Both had their own motives for the game: for the French it was a warm up for the forthcoming World Cup tie against Scotland, and Arsenal saw it as a chance to show themselves as ambassadors for English clubs’ re-introduction into European competition. At this time no English team could qualify for Europe due to Liverpool’s involvement in the Heysel Stadium Tragedy of 1985, after which a blanket ban was placed upon English clubs between 1985 and 1990.

Platini had stated he wished to play Arsenal rather than Spurs, due to the team’s quintessential British style of play, which he believed would provide a decent test ahead of their World cup qualifier at Hampden Park. France had brought along an experimental young side to play against the Champions elect. Graham, giving the opponents the respect they deserved as a national team, picked the side he was using for the League campaign, and indeed in the matches sandwiching this friendly the starting line-up was exactly the same eleven players. Arsenal were currently in pole position in the league and, on this Valentine’s night, played in their yellow away kit which became immortalised a few months later with the title win at Anfield.

The game started slowly and, while the French held their own in the first half, in the second half it was men against boys, as the powerful English team swept aside the French who were found wanting in all areas of the pitch. The first half was a dreary affair, but after a raft of second half substitutions by Graham, the Gunners looked far more threatening and their new found forward line unpredictability threw the French defence. On the hour Paul Merson sliced an attempt on goal into the path of Martin Hayes and the recently introduced substitute made it 1-0 with a terrific shot that went in via the post.

With Arsenal breaking through the defence at will it was a surprise that they had to wait until the 74th minute to wrap up the game with a second goal. This was provided by Perry Groves who, having only a minute earlier replaced David Rocastle, sprinted down the right wing and slung in a cross for Alan Smith to lob Joel Bats.

Fittingly both goals were scored in front of the Arsenal fans at the North Bank as the Clock End was closed for the game.

The pre-game quotes reflected what each side wished to get out of the encounter:

Vice chairman David Dein: “This game is a tremendous honour for us. It is a platform for a speedy return to European football and a chance to judge how our side has matured against foreign opposition”.

George Graham: “It has been a great disappointment for the players, coaches and managers not to be able to play in Europe. This will be good for Arsenal and England, All our players win benefit from playing against such a good side”.

Platini: “Arsenal are very British and will be no less difficult to play than Scotland. Marwood and Rocastle are very fine technicians.”

Quotes after the game

George Graham; “The match was shown live in France and hopefully the goals will be seen throughout Europe. It would be nice if doors In Europe were opened to us again and I genuinely believe the Continentals want us back. I think tonight proved that we should not knock the English game too much, although we should also try to get to their level in terms of skill.”

“We played a lot of skilful football, particularly in the second-half. Our goals from Martin Hayes and Alan Smith were both crackers”

“I was delighted with my substitutions too. Martin scored with his second touch, and Perry Groves’ first contribution set up Alan’s goal. It’s not often substitutions produce such speedy results!”

Alan Smith commented on the close attention he was given by William Prunier: “He showed a liking for my shirt right from the first whistle. In fact he took a hold of it so often, I thought he wanted to swap jerseys after half an hour.”

A downcast Platini said afterwards on being asked if he would contemplate donning his boots against Scotland was “It is difficult enough being manager of France.”

French midfielder Marcel Dib, the only member of the team from Monaco said: “Arsenal could easily have won by three or four. On this form, Arsenal look a better team than England”

Stephane Paille sporting a black eye from his Highbury experience said: “Now we know just how tough it will be in Scotland.” 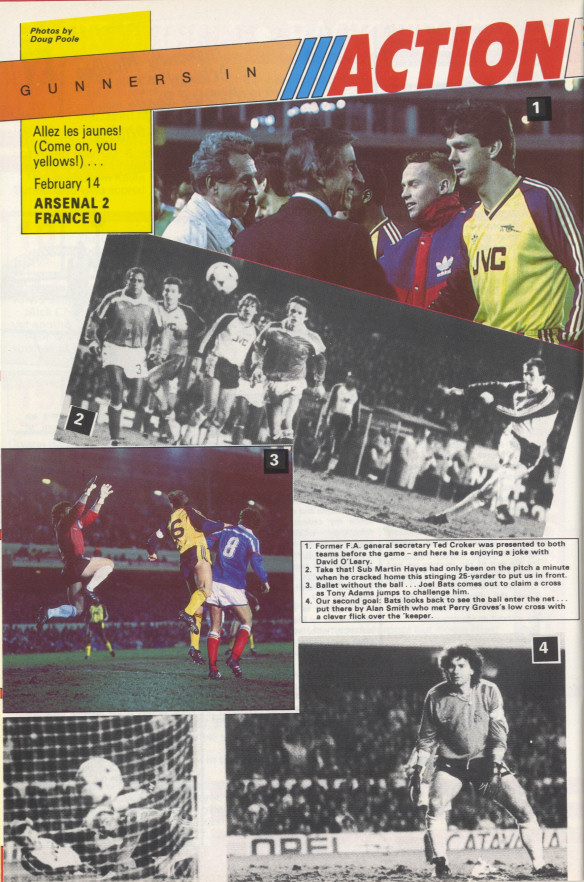 Related to this game

Platini was unable to select the prodigious Eric Cantona who had been suspended from the national team for grossly offensive remarks about Platini’s predecessor, Henri Michels.

This was not Arsenal’s first match against an international team at home, as the club had also played against an Austrian XI in 1933, Brazil in 1965 and Australian in 1984.

Monaco’s manager, Arsene Wenger, had chosen to remove four of his players, including Battiston and Amoros, from the French team due to their European Cup tie against Galatasaray which was two weeks away!

Andy Roxburgh, the Scottish manager, was unimpressed with his countryman George Graham allowing French acclimatisation to the British game, saying tersely before watching the match: “we are not particularly happy about this game being played.”

However, Roxburgh was being unduly anxious as France’s careful planning did them little good. They lost to Scotland 2-0 in March 1989 and were denied a place at the 1990 World Cup by virtue of finishing 3rd in the group, behind Scotland who qualified.

This game came days after Arsenal had played Millwall at the Den with the referee wired with a microphone. David Elleray allowed his performance to be seen and heard for an ITV Special called “Out Of Order” which was screened in March of that year. It included the infamous Tony Adams goal that wasn’t, and his subsequent complaints.

At the same time as Arsenal were beating France, David Seaman saved three penalties in a shoot out to see QPR reach the semi-final of the Simod Cup.

Arsenal went on to win the First Division title in the most dramatic finish to a title race, beating Liverpool 2-0 at Anfield in the dying seconds of the game.

At the time of the game against France, Arsenal were 15 points ahead of Liverpool. The Merseysiders were at the start of run that saw them undefeated in 1989 prior to the game at Anfield, while Arsenal’s nerves got to them, especially towards the end of the season as they dropped home points against Derby and Wimbledon.