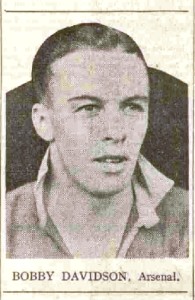 Bobby Davidson made his debut on 20 February 1935, and scored with a header in a routine 2-0 win over Stoke at Highbury, and everything looked rosy for the new Gunners forward.

Earlier that month, on 1 February 1935, George Allison purchased Davidson from St Johnstone for £5,000, widely thought by all involved to be the eventual successor of Alex James. James, who was the fulcrum around the 1930s Arsenal team built by first Herbert Chapman and then Allison, was ageing and because of his perennial battle over his contract with management was obviously not going to play on forever.

Davidson was so well thought of that Chapman had tracked him more than once while he played in junior Scottish football for St Bernards in 1932, and after his move to St Johnstone in March 1933 was a regular visitor at their home of Muirton Park. Chapman had made a great friend in Tom Muirhead the Saints manager, and the consensus seemed to be that it would do Davidson good to remain in his home country for a few more years before coming to the bright lights of London.

After Chapman’s demise, Allison kept up the scouting, regularly watching St Johnstone and even taking Arsenal there for a match in September 1934. After many intense rumours about other Scottish players coming to Arsenal, they got their man. The fee was subject to speculation though it does seem likely that St Bernards received approximately £1,000 of the money that went to St Johnstone, in a prior agreement by the canny St Bernards management.

Unfortunately, despite the many playing similarities between James and Davidson, including wearing long shorts, it turned out he was not the heir apparent to an Arsenal great but more a precursor to the Marinello saga of the early 70s.

He played in nearly all of the remaining games of that 1934-35 season, in which Arsenal became the second team to win the title three times in a row. In his first season he managed 12 games but netted only one more goal after his debut score. He was injured in the final game of the season and, consequently, missed out on playing for the Anglo-Scots against England at Highbury a few days later.

Injuries were a recurring theme and next season he only managed 15 games, did not score once, and was not picked for the 1936 FA Cup final won by the Gunners. Injuries were a feature throughout his career, both before and after his spell at Arsenal, and not confined to his time in North London.

An unfortunate but familiar refrain

Next season, 1936-37, was his most successful and reached its zenith when he scored four goals against Portsmouth in a 5-1 victory on 12 December 1936, and also managed to play more than he missed, turning out 31 times and scoring 12 goals. But, as a team, Arsenal finished trophyless. It would not be unfair to say that at Arsenal he was an unlucky player as in the 1930s Arsenal competed in seven Charity Shields, of which they won five. Bobby Davidson played in two of these games, both of the defeats, in 1935 and 1936.

Alex James left Arsenal and retired from football in the summer of 1937. By November of that same year the Davidson experiment had run its course and he was swapped with Leslie Jones in a deal with Coventry, that saw Arsenal also pay the Sky Blues an undisclosed fee.

His latter career was blighted by the war, though he remained at Coventry until 1947. He joined the Army during the war becoming a Lance Corporal, and played many wartime games for Coventry as well as guesting frequently for Bradford City, Darlington, Halifax, and Notts Co. Additionally, Davidson played representative football for the Northern Command Army team during the latter war period and transitional 1945-46 season.

His full first team record is:

He was in some ways, especially in the failure to live up to expectations, the forerunner to Peter Marinello who was hailed as the “New George Best”. Of the two, Bobby Davidson made more of an impression in footballing terms for Arsenal, but both were highly talented attack minded Scots who, for one reason or another, promised more than they delivered and thus sadly did not fit into their respective Arsenal teams.