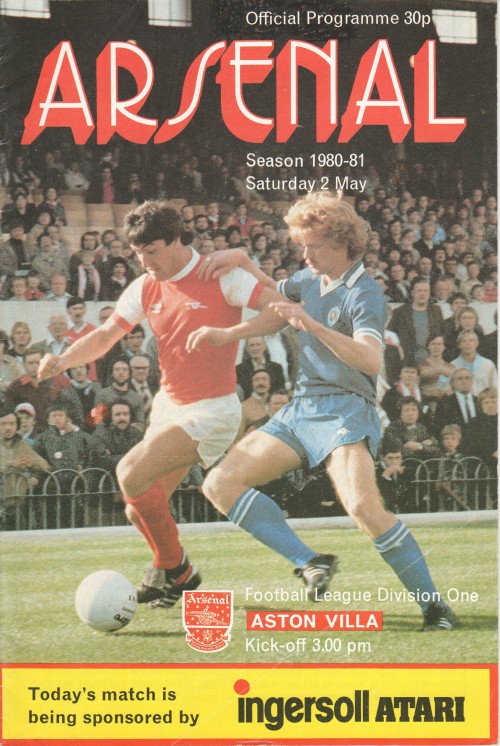 Aston Villa went into the match four points ahead of Ipswich who had a game in hand over them and, in the era when two points were awarded for a win, only needed a draw at Highbury or for Ipswich to slip up to be certain of the title. Arsenal’s incentive was a place in Europe if they won. 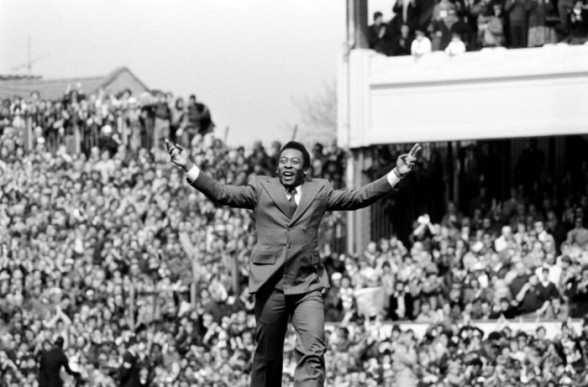 Once the game began a strangely subdued Aston Villa were battered by the purposeful Gunners in a very one sided game. This did not worry their legions of fans in the Clock End as their transistor radios were telling them that results were going emphatically their way.

Arsenal took the lead as early as the 12th minute after Des Bremner conceded a free kick just outside the penalty area. Kenny Sansom swung a high ball in for Alan Sunderland to flick on to Brian McDermott. He found Willie Young and his boot did the rest, knocking the ball into the net past a static defence. 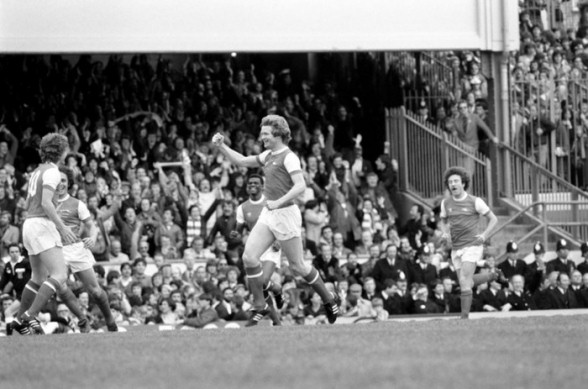 We’ve got the biggest Willie in the land

The second goal came just prior to the half-time whistle and emanated from a Pat Jennings corner clearance, leaving much of the Villa defence out of position. Peter Nicholas helped the ball onto Brian McDermott who took on, and beat, both Kenny Swain and Colin Gibson before pivoting and placing a low shot into the left hand corner past former Arsenal favourite Jimmy Rimmer. 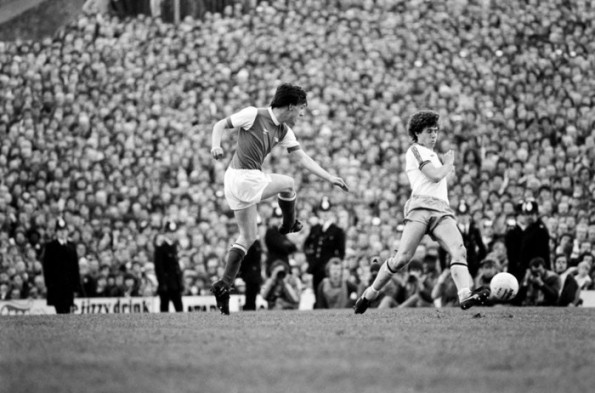 Arsenal then controlled the second part of the game much as they had the first, with Paul Davis showing early signs of the creative player he would become in the latter part of this decade and the next. Defensively David O’Leary and Young had an easy time of stifling Peter Withe and Gary Shaw. Indeed Villa’s only real shot on target came in the 70th minute when Gordon Cowans’ powerful effort was tipped over the bar by Pat Jennings.

This result meant that Arsenal finished third in the league and qualified for the UEFA cup, while Ipswich’s surprise defeat at Middlesbrough handed the title to Ron Saunders’ Villa. After the match a mass invasion of both sets of supporters occurred on the Highbury pitch, primarily to “celebrate” Villa’s title win. 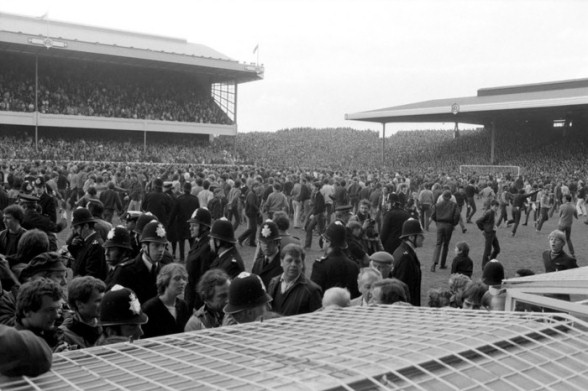 “Some people are on the pitch…”

Terry Neill on the importance of the game for Arsenal: “We’ve just got today’s hurdle to climb and the dream of Europe could come true, and we could also have established the record of going through a whole season without losing a League match at Highbury.”

Terry Neill of the title race before the game: “I’ve known Ron Saunders and Bobby Robson as pals for a very long time; they are both marvelous people and I don’t mind which of them wins the Championship.”

Don Howe, Arsenal coach, said after commenting on the merits of Aston Villa: “When we meet Villa I am concerned only with Arsenal. We need to win ourselves because we intend to clinch the third spot in the table, so we can compete in Europe again next season.”

Ron Saunders on the season: “We have played some tremendous football up and down the country. I’ve not only got tremendous players with tremendous ability but they’re also very good people. They’ve sweated blood and put up with me. Give the lads what they deserve…I have certainly never had a better squad of players.”

Despite Arsenal winning this game, this is the only occasion in Arsenal’s history that any team has won the league at any of the club’s grounds.

The whole of the Clock End was given over to the Villa fans who witnessed their team’s first title win in 71 years. There were a number of crowd related skirmishes at this end prior to the game beginning which were controlled by the police presence. 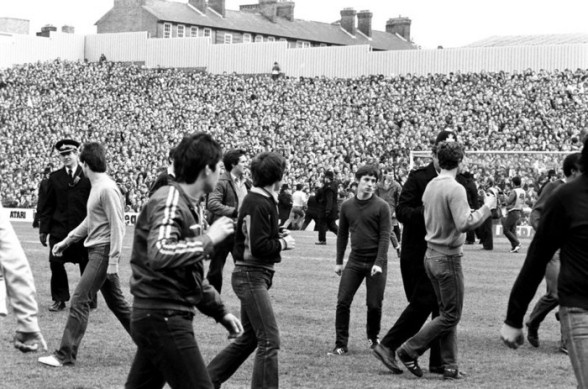 The win also meant that Arsenal had gone through the whole season undefeated at Highbury in the League, and were undefeated in their final nine matches.

This was Sammy Nelson’s final competitive game for the club, as he signed for Brighton later in the year leaving with the best wishes of the club and the fans. It was also Frank Stapleton’s final game before his move to Manchester United.

Ipswich, though falling short in the League, did win the UEFA Cup a few weeks later, beating Dutch team AZ Alkmaar 5-4 on aggregate.

Arsenal’s UEFA campaign in 1981-82 lasted as far as the second round when they were put out of the competition by Winterslag of Belgium.

By contrast Villa went on to win the European Cup next season under Tony Barton who had replaced Ron Saunders mid season. A Peter Withe goal in the 67th minute ensured they won the trophy beating Bayern Munich in Rotterdam. The win looked highly unlikely early on as an injured Jimmy Rimmer was replaced in goal very early on by Nigel Spink.

Rimmer became the first goalkeeper to win a European Cup winners’ medal with two different teams, despite only appearing for a total of nine minutes in both finals.

This week saw the return of former first team coach Steve Burtenshaw to the club as Youth Development Officer.

Aston Villa won the title using just 14 players, the lowest number ever to do so, seven of whom were ever-present.