Having recently tweeted the question: “What did John Barrett do 752 times for Arsenal between 1968 and 1997?”, we thought we’d pay homage to Arsenal’s prolific crossword compiler. Below are John’s first and last puzzles. 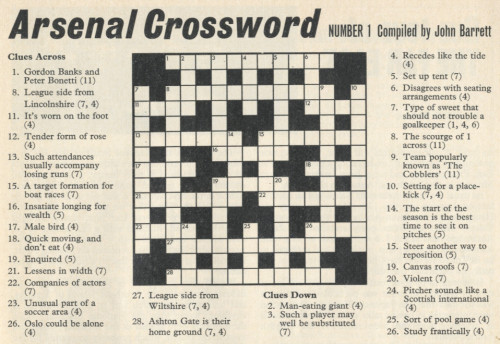 We thought we’d have a go at creating our own puzzle. Unfortunately, there aren’t too many crossword plugins for WordPress. We certainly weren’t going to fork out the best part of £50 for one so we’ve used the freebie below. It’s not a crossword in the strictest sense and it hasn’t got the greatest interface. Ironically, it works much better in mobile browsers than desktop browsers.

This interactive crossword puzzle requires JavaScript and any recent web browser, including Windows Internet Explorer, Mozilla Firefox, Google Chrome, or Apple Safari. If you have disabled web page scripting, please re-enable it and refresh the page. If this web page is saved on your computer, you may need to click the yellow Information Bar at the top or bottom of the page to allow the puzzle to load.

One thought on “The Arsenal History Crossword – Number 1”