While there are many classic matches we could have chosen, the 1970s FA Cup semi-final victories which so affected the Stoke psyche being the most obvious, we went with last season’s game for one obvious reason. 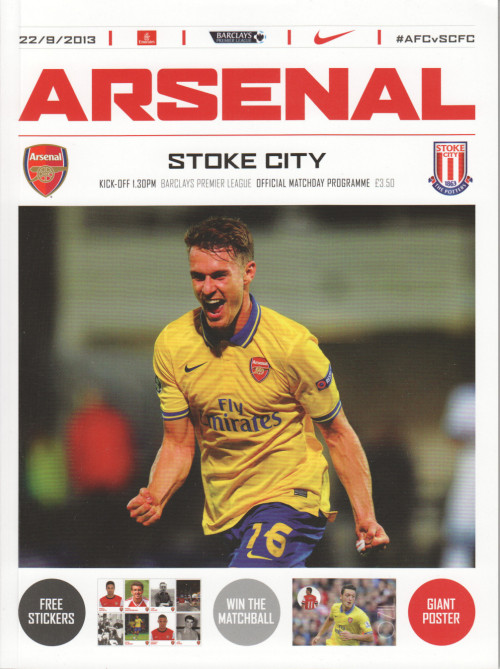 Arsenal unveiled their most expensive player in the club’s history, and the first genuine superstar for a number of years, Mesut Ozil, for his home debut.  The £42 million signing had played his first game in the 3-1 win the week before at Sunderland.

In a turnaround from the recent history of games between the clubs, Arsenal scored a trio from set pieces, in which Ozil had a hand in all three goals, whilst Stoke had more possession and won more corners. The game was closer than the 3-1 margin suggests but the spirit shown by Arsenal was just enough to see off a Stoke side playing more expansively under the philosophy of new manager Mark Hughes.

The scoring began in the fifth minute when an Ozil free-kick caused Asmir Begovic to palm the ball away at full stretch only for Aaron Ramsey to drill the rebound home for his seventh goal of the season. Stoke replied in the 26th minute when full back Geoff Cameron reacted quickly to some good work by Steven N’Zonzi and Marko Arnautovic, whose shot had hit the post and bounced into Cameron’s path for him to knock it past Wojciech Szczesny. It was his first goal for Stoke.

The Potters could have gone ahead had Kenwyne Jones been able to control a long Ryan Shawcross pass, but in the 36th minute Arsenal won a corner which Ozil flighted onto the head of Per Mertesacker to nod past Begovic, who had been distracted by Laurent Koscielny.

Robert Huth was booked in the 53rd minute for a body check on Serge Gnabry, and this coincided with Stoke then enjoying their best spell with some attractive passing. They could have equalised again but Szczesny stopped an effort from Marc Wilson. The scoring was completed by the Gunners in the 72nd minute as another Ozil free-kick found Bacary Sagna, whose header looped into the back of the net.

Right on the stroke of full time Mikel Arteta was fouled by Stephen Ireland which earned the Stoke substitute a yellow card in what was a generally clean game. There was just enough time left for Ramsey to force a great save from Begovic, and the North Bank to sing “We are top of the League” before the final whistle went.

The result meant Stoke could not improve on their recent record at The Emirates, having lost all six Premier League visits to the ground and, consequently, Arsenal remained at the top of the table while Stoke dropped to 10th.

Talking about his new record signing, Mesut Ozil, Arsene Wenger said: “He gave a lift to everyone at the club. He will be the point of our team work, team play…He will get better when he fully integrates into the pace of the game…when you look at his numbers, the assists are not a coincidence, they are the reality of his game, he is a great player”

About the game in general, he commented: “When you play against Stoke you don’t expect to score from three set pieces”

Mark Hughes reiterated Wenger’s comment but also took some positives out of the game: “Three goals from set pieces does not normally happen to Stoke teams…we showed resilience and character to get back into the game after we conceded the first one but I was unhappy with the way we conceded all three…At 2-1 I thought we were the more likely to score.”

Hughes on Ozil: “Arsenal have a world class player in Ozil and I think, in general, they are very strong”.

Aaron Ramsey had started the season as arguably the best central midfielder in Europe, finally finding his feet again after a number of seasons recovering from serious injury. To his basic skills of counter-attack and breaking up the opponents play, he had added goal scoring, an example of which was his goal early in this match. In fact he had scored so many goals in the early season that he was no longer being deemed as the celebrity reaper.  In previously seasons a myth had grown up amongst the media that whenever he scored, a celebrity died. However, so prolific had he been that his goals now easily outweighed the co-incidental demise of a celebrity.

This match was Mikel Arteta’s first game of the season after recovering from a thigh injury, but Santi Cazorla, Lukas Podolski and Alex Oxlade-Chamberlain were all on the injury list. Stoke’s Charlie Adam was the Potters’ only doubt prior to the game after he gashed a leg on the training ground during the week; despite this setback he did start and played for close to an hour.

Arsenal’s injury woes were made worse as Theo Walcott suffered an abdominal injury in the pre-match warm-up which allowed Serge Gnabry to take his place for his first Premier League start. Ryo Miyaichi was the late addition to the bench.

In the League, despite spending the most number of days in top spot for the campaign, Arsenal eventually finished fourth, while Stoke, in Mark Hughes’ first year in charge, were ninth at the end of the season. This was also Stoke’s highest ever finish in the Premier League.

Arsenal completed a League double over Tottenham and also beat them in the FA Cup third round, without conceding a goal. The FA Cup win over their North London neighbours was the start of the journey on the way to the winning the trophy without leaving London. Stoke were knocked out away at Chelsea in the fourth round.

Stoke last beat Arsenal in North London on the opening day of the 1981-82 season.

Joachim Low was in the crowd watching the game, and in particular the four German players present, as he continued preparations for the World Cup in Brazil.

Talking of the World Cup, which seems a distant memory now we are so far into this season, the list of ten players in this game who also went to the 2014 World Cup finals with their countries was as follows: Germany – Mertesacker & Ozil; France – Koscielny, Sagna & Giroud; England – Wilshere; Belgium – Vermaelen; Bosnia and Herzegovina – Begovic; Honduras – Palacios; USA – Cameron.