For those of you not aware #OpAa is a brilliant organisation run by Dan which brings together artists working on Arsenal related art. They co-operate and combine to present the OpAa events which showcase a whole variety of Gunners works.

We are eagerly awaiting details of OpAa3. 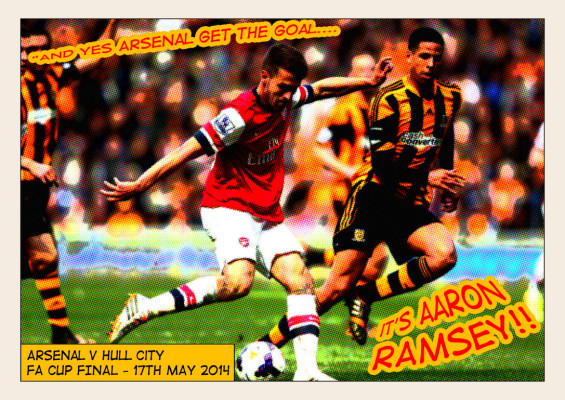 This and other Arsenal items are available on the OpAa website

Hull made a fantastic start, but the game had two major turning points which favoured the Gunners. Firstly, Kieran Gibbs cleared off the line from an Alex Bruce header to stop the Tigers going 3-0 up, and secondly the impressive Bruce had to come off due to an injury in the 67th minute.

As early as the 4th minute a Stephen Quinn corner fell to Tom Huddlestone on the edge of the box, and his hooked volley into the path of James Chester was converted as he stuck out a foot which turned the ball past Lukasz Fabianski via the post.

Four minutes later Bruce got his head on the end of another set piece and Fabianski could apparently only parry the ball onto the post. It bounced back into the path of Curtis Davies who made no mistake from close range. Shortly afterwards a set-piece caused the Arsenal defence trouble and, again, it was Bruce, this time with a looping header but Gibbs kept Arsenal in the game with his goal-line clearance.

The occasion threatened to pass the Gunners by but they managed to grab a lifeline as Cazorla scored with a right-footed free-kick from the edge of the box. Allan McGregor got a fingertip to the Spanish midfielder’s curling effort, but it had too much on it and landed high, just under the crossbar.

The game ebbed and flowed until the hour mark when the substitution of Sanogo seemed to make Arsenal realise the enormity of the situation. After a number of near misses, Koscielny poked home a loose ball in the box after a Bacary Sagna header had bounced off Olivier Giroud.

After this equaliser it was virtually all one way traffic as Arsenal created, and missed, chance after chance, with Gibbs’ close-range wild effort in normal time causing disbelief in the Arsenal crowd behind the goal. Then, just after the restart, Giroud met Aaron Ramsey’s cross and headed against the bar.

But the Gunners were not to be denied as on 109 minutes, with both sets of players seemingly awaiting penalties, Ramsey latched onto a clever back-heel from Giroud to poke home his 16th, and most crucial, goal of the season.

There was still time for the tired Hull players to create one more chance as, after Fabianski dashed out of his goal, Sone Aluko’s effort from out wide rolled across the face of the empty goal to safety. The win confirmed Arsenal as the joint most successful club in the competition with an 11th triumph. 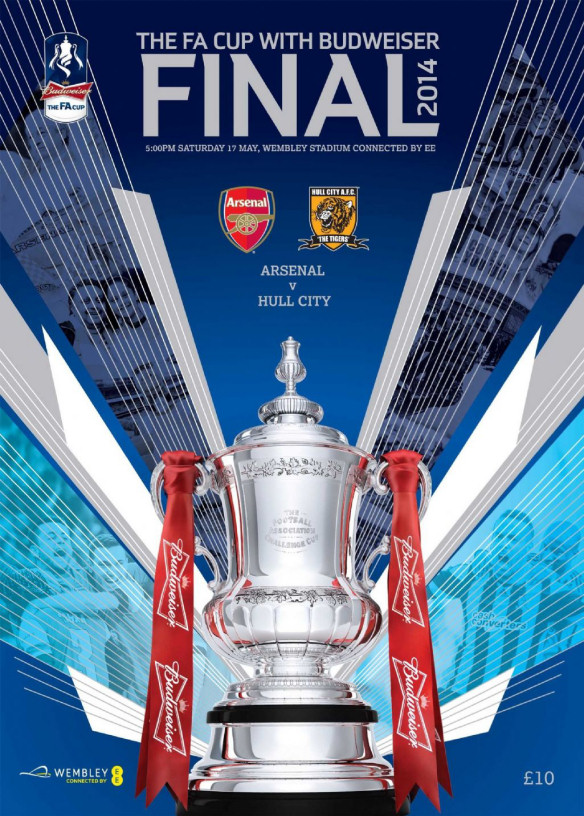 Programme cover for the game

Arsene Wenger: “It was more important today than all the others. Twice we had won the double, so we had already won something and were not under the pressure we were under here.”

“It is a feeling of relief and happiness as we were under severe pressure to win and we didn’t start well of course.”

Mikel Arteta: “Aaron Ramsey has been the best player on the pitch when he has been fit and he was the right man to score.”

Man of the match Aaron Ramsey: “I’m just delighted to come back, make a big impact in a game and win the FA Cup”

Steve Bruce: “Proud? Of course I am. They were magnificent. They’ve given everything, but in the end we just fell short.”

“All credit to Arsenal, congratulations to them. They were under enormous pressure and have come back from a position when I thought they were down and out…we came so close to winning the Cup, but it was just not meant to be and just not our day.”

Curtis Davies: “We gave everything but we are left feeling flat… I’d sooner have no plaudits and win, than have the plaudits and not be getting a medal.”

Arsenal had played in the final 17 times previously on a Saturday, yet this was the first time they had not kicked off at the traditional 3.00pm.

This was Hull’s first appearance in the final. The closest they had come previously was the semi-final in 1930 when they were defeated in a replay by Arsenal.

Both Sagna and Fabianski played their last match for Arsenal prior to signing for Manchester City and Swansea respectively. Thomas Vermaelen’s last action as Arsenal captain was to lift the trophy, even though he played no part in the final.

It was a little surprising to see goalkeeper Steve Harper on the bench as, almost a year previously, he had retired from the game, playing his “final” match for Newcastle versus Arsenal.

There was a case of serendipity for us at The Arsenal History with regards to the matchday programme. Back in 2013 we had been contacted by a someone whose friend was a descendant of Punch McEwen, Arsenal’s manager during World War 1. We had provided him with some information on Punch and didn’t think any more of it. We then received an email shortly before the Cup final informing us that there would be a feature on Punch in the programme and it would use the information that we had provided. Below is a copy of the article (click on the picture to enlarge it to a readable size). 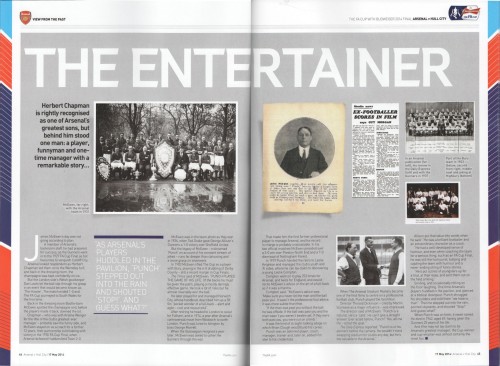 Arsenal did not have to leave London en route to winning the Cup. The only other time this occurred after 1900 was in 1950, when Arsenal, again, won the Cup.

Hull, on the other hand, were only drawn at home once, and appeared twice in London, winning a pulsating semi-final 5-3 at Wembley against Sheffield United to get to the final.