The First Arsenal Crest – The Origins 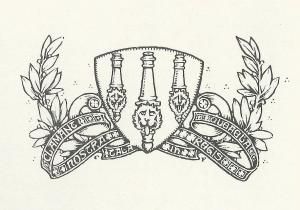 Mr Kelly asked me last month whether I had ever seen the first crest of the club prior to it’s publication in the Book of Football 1904-05. I sat pondering in my Woolwich Arsenal bobble hat which was skilfully produced by our good friend the artist VCCdesigns and thought. 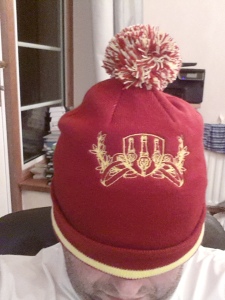 The answer to his insightful question was never. Never in any local paper, not in any handbook nor any programme, or club correspondence.

This made us curious so we looked into the historiography of how it became stated that the first Arsenal crest appeared in or around 1888. It has a very simple origin within Arsenal books, so was quite an easy find as it only appears in the “Official Arsenal History” with the statement that it is:

“the first badge adopted by Royal Arsenal FC probably around 1888”

The club’s badge is universally acknowledged as a slight deviation of the Woolwich civic badge, as it has the same three cannons with lions heads and the exact same motto: ‘CLAMANT NOSTRA TELA IN REGIS QUERELA’ meaning “Our weapons clash in the King’s quarrel” and here is the Civic Woolwich crest below. 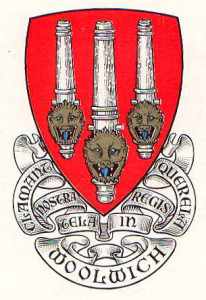 In is fairly obvious that the club’s first crest is effectively a fancier version of the town’s one, as it has added the laurel leaves and has the wording expanded in ribbons to make it look slightly grander than the original.

But it leads to a major issue with the dating of the football club crest, because the original Woolwich municipal crest was not designed until 1901 to coincide with the town becoming the Metropolitan Borough of Woolwich – a part of the recently constituted London County Council. Woolwich had been moved from Kent in 1889 hence the need for a re-branding of the civic image. As part of this presentation of the new image the Woolwich Town Hall, which was built between 1902 and 1906, has the three cannons crest dotted around much of it.

Which now leads us back to the Book of Football published to cover the 1904-5 season. In our new book about Royal Arsenal during the years 1886-1893 – to be published early next year [actually published in June 2018 – MA] – we will be discussing historiography, that is the history of the history, of Arsenal and this book gets a lot of mentions. Within it there is an article on Arsenal by Arthur Kennedy, the football club’s vice-chairman, who it is probably fair to say let his imagination get the better of him while informing his readers of many of the travails at the start of the club and its journey “forward”. Doubtless were he still alive he would be blaming the editors of the publication.

The first time this club crest was displayed was as an accompaniment to the article by Kennedy. It was more than likely commissioned by the club, or by Kennedy himself – seen on the right of the extract below – as promotion for the book, based on the new town image and highlights the civic pride in their new borough. 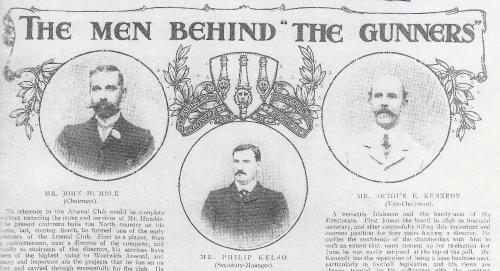 An alternative view could be that, as Mr Kennedy’s account is riddled with errors that have made their way into the history of Arsenal, this crest too is made up and not at all representative of Woolwich Arsenal FC. It is likely that this was the only time it was ever published as a club crest in 1905 prior to it’s inclusion in the Official History of 1986. We have never seen it after 1905 in any local paper, not in any handbook nor any programme or letter headed club correspondence.

On balance we think this was a club crest because this was the first time that Arsenal were represented in their own words by a publication as important as the “Book of Football”, and were happy to have this shown as their badge.

However the crest was formed in the mid-Woolwich Arsenal period not the early Royal Arsenal era and, while it is the first Arsenal crest, it could not have been designed on the date claimed in the Official History.

Also, we think it is a crest as I’d look like a massive plum if the crest on my bobble hat was not really an Arsenal crest at all.

In the next article in the Crest series. Why the Cannon should face left and not right.