League win against the FA Cup holders for the Gunners 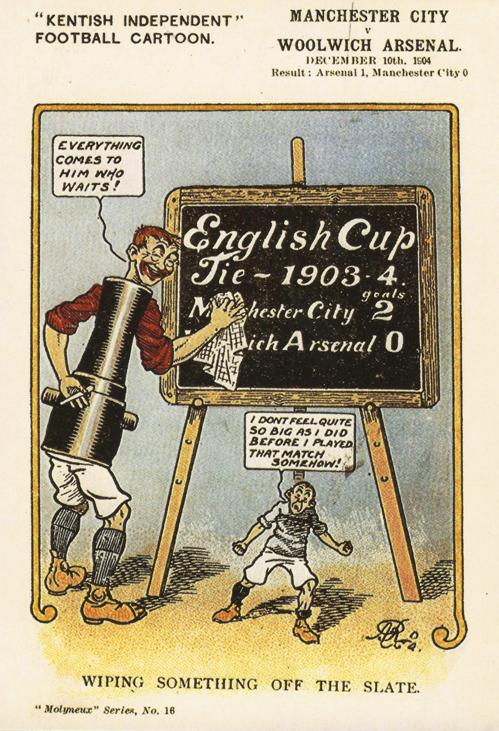 At the end of the 1903-04 season Woolwich Arsenal achieved their first and only promotion. This caused great excitement in the area and London as a whole, and the local press upped their game adding to their reports a number of topical football cartoons. The black and white cartoons published in the Kentish Independent in the first season in the top flight, 1904-05, were made into coloured postcards by a local firm Molineux.  A selected 15 cards within this series were then reprinted in the 1980s by the Islington Libraries Service as part of the club’s centenary celebrations.

It is this 15 card series that we will show for each day until Christmas Eve as The Arsenal History Advent Calendar.  Many of the images from the Kentish Independent  cartoons that not only appeared in this season but right up to the move to Highbury were gruesome, macabre or downright bizarre. However, the 15 selected in the 1980s, while containing the occasional oddity, are of the less contentious, though no less interesting, images.

Today’s image is the only one that correlates with the date of the match celebrated on the postcards. All the rest we have randomly picked in a sequence that ends on 24th December. We intend to provide some information on each game noted, the meaning and imagery behind the cards messages and any other detail of related interest.

All of the cartoons features “Redshirt” a character who wore a redshirt underneath his cannon body, and was the embodiment of the club; being player, supporter and official rolled into one figure.  There are a couple of historical pointers the first being that in every postcard he is wearing black socks, which was the standard colour of Arsenal socks all through Plumstead and up to just before the time in 1933 when Herbert Chapman altered the kit to add the white sleeves. The second being that the club did not really accept the Gunners nickname until around this period preferring to be called the “reds”, hence his name of Redshirt.

On 10th December 1904 Woolwich Arsenal defeated Manchester City in the League and it was seen as a revenge for City’s 2nd round FA Cup win over Arsenal at Plumstead the previous season. City then went on to win the FA cup in 1903-04 defeating Bolton Wanderers in the final to pick up their first major trophy

The game on 10th December 1904 in front of 16,000 fans at the Manor Ground was reported as being fairly even but was snatched near the end by Arsenal when Charlie Satterthwaite scored the winner in the 80th minute. Earlier that season Charlie Satterthwaite was the first man to score for Arsenal in the top division, a feat he achieved on 24th September versus Wolves.

Manchester City were to finish third only two points behind eventual Champions Newcastle, so for the newly promoted club this was a big win against the cup holders and league challengers.

This game was assigned as the Jimmy Jackson benefit game and proceeds amounted to £240. However the crowd attendance was affected by heavy rain, so ‘directors generosity’ saw to it that they gave the whole gate to Jackson not the percentage originally set aside.