It’s been 25 years since Arsenal’s history was re-written and Sam Hollis was instated as the club’s first manager. Now it’s time to re-write it once again and remove Sam from the records.

The name Sam Hollis came into the fray as Arsenal manager in the late-1980s. The first instance I can find is the Rothman’s Football Yearbook published in 1989 when they started listing all of each club’s managers rather than just those since 1946. And once a “fact” is published in a tome as esteemed as Rothman’s then it must be true, mustn’t it?

Why this happened, I don’t know. But, whoever decided that he was the club’s first manager hadn’t done much in the way of research. Maybe they saw that Hollis, later, was Bristol City’s manager and, knowing that he had come from Arsenal, assumed that he held a similar position at Arsenal.

As a slight digression, there is another mistake in that list of managers. You can read about “George” Elcoat here.

The fact of the matter is that Hollis was never Arsenal’s manager, nor was he secretary. The only role he held was that of first-team trainer.

He was born Samuel Woodroffe Moore in Nottingham on 27 February 1866. His mother, Levinia Moore, was unmarried. Levinia Moore married Edward Hollis on 1 November 1868. Aged 59, Hollis was 26 years older than his new wife. On the 1871 census, Sam still had the surname Moore and was shown as Edward Hollis’ son-in-law!

By 1881, Sam was now known by the name Hollis. He also had a job, working in the district registry. His step-father had died earlier that year.

He married Eliza Winfield in 1887. Their first son was John Bernard Hollis who was born in 1888. Sadly he died in 1892. They also named their second son John Bernard Hollis. This may seem weird today but it was quite common back then. It was customary for children to be named after parents or grandparents. With high child mortality rates, a child born after the recent death of a sibling would often be given the same name to ensure the continuity of the parent’s or grandparent’s name. The second John Bernard Hollis was born in Nottingham on 28 January 1894. Sometime between the end of January and the end of August 1894 the Hollis family moved to Plumstead as Sam took up the position of trainer at Woolwich Arsenal FC.

The first mention of Sam Hollis at Arsenal is in the Woolwich Gazette on 31 August 1894. As can be seen, at this point he was described as the club’s trainer. 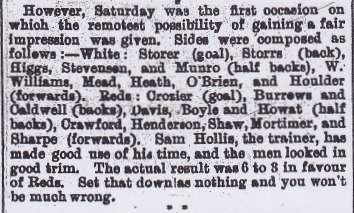 Just a month before this the directors of the club had announced that they didn’t have the money available to pay a manager. 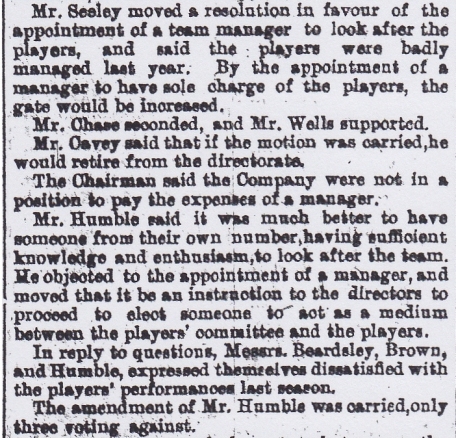 And on 24 August the Woolwich Gazette confirmed that a players’ committee consisting of three directors would be in charge of team affairs.

In January 1896, at the half-yearly general meeting one of the shareholders proposed that the directors appoint a secretary-manager. This, and various other complaints, resulted in the board throwing their toys out of the pram and resigning en masse. It was obvious that the members of the players’ committee rather enjoyed their role, even if it meant performances on the pitch suffered. By the end of the meeting the directors had all withdrawn their resignations, but no manager would be appointed. 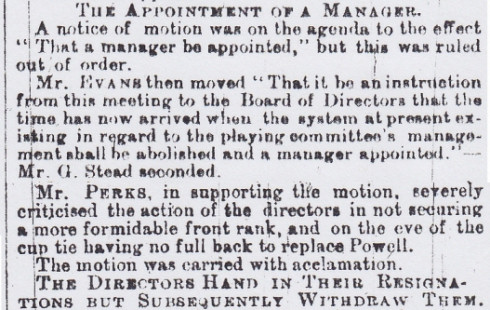 Not much was done about appointing a manager for a year but Herbert Chase finally managed to put enough pressure on the board at the half-yearly meeting in 1897 Thomas Mitchell was appointed as Arsenal’s first ever manager in March of that year. 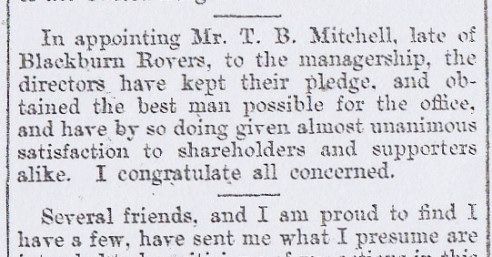 On 30 April 1897 the Woolwich Gazette announced the departure of Hollis who was going to take charge of Bristol City. 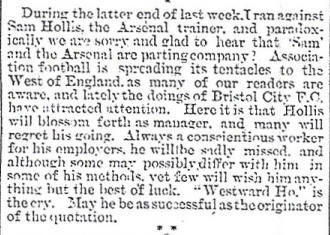 Whilst the following week it was announced he was taking three Arsenal players (Sandy Caie, John Russell and Finlay Sinclair) with him and would eventually be followed by top scorer Paddy O’Brien as well. Amazingly Hollis took these players with the best wishes of the local press. 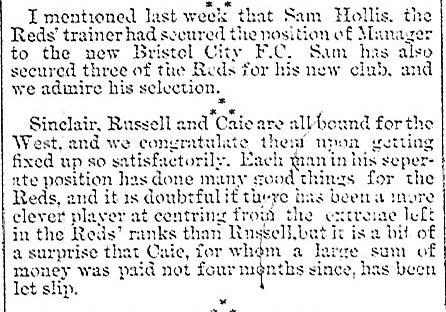 As for the position of secretary, that was held by Harry Greenwood during Hollis’ time in Plumstead. 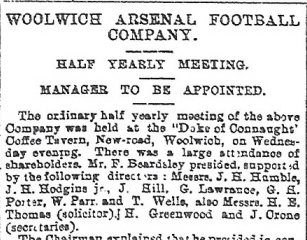 Harry Greenwood was retained as joint-secretary along with Thomas Mitchell until the end of the 1896-97 season, when he relinquished the post.

So there you have it. Sam Hollis, Woolwich Arsenal trainer 1894 – 1897 but never manager nor secretary. Sorry Sam.