This season we’ve been asked to write a regular page in the official Arsenal programme based on a classic match featuring the opponents for each game we play in. Programme editor Andy Exley has kindly given us permission to reproduce the match reports on our blog. We will also be including additional material that didn’t make the final edit of the programme.

Our first game is the first leg of the semi-final of the Coca-Cola Cup in the year that Arsenal became the first English team to complete the domestic cup double. 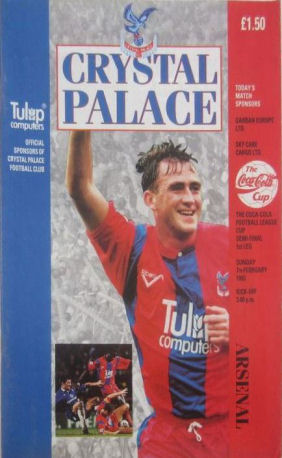 This highly anticipated all-London semi-final was effectively over by the 21st minute with the Gunners’ second goal of the game. Although commonplace today, at the time this was a rare live TV game for both teams.

Ian Wright started the game brightly, and was the target of some barracking from his former supporters, but his quality shone through as, after bursting past Eric Young in the area, he was fouled by Eddie McGoldrick. Wright got up and then converted the penalty with aplomb into the top corner for the opener in the 10th minute. 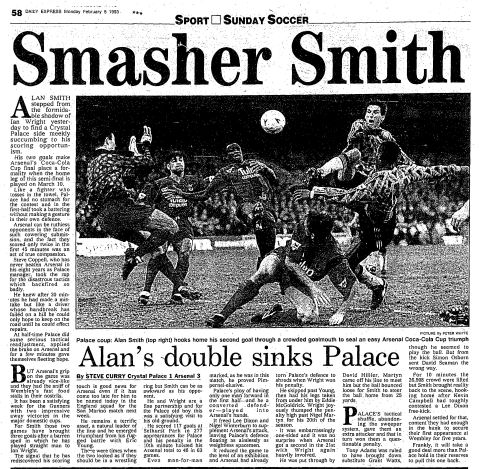 He was then instrumental in the crucial second goal. This time he shook off McGoldrick, and combined with David Hillier to fashion a chance which Nigel Martyn did very well to block outside his area but the ball fell to Alan Smith who converted into the empty net from a distance of 25 yards.

Arsenal made the most of Palace’s defensive tactics which allowed Lee Dixon and Nigel Winterburn the freedom to assist the attack which tore the home team’s defence to shreds.

The first 45 minutes of the game was rather one sided and Arsenal’s vice-like grip could have manifested itself with more goals. Consequently, at half-time, Steve Coppell re-arranged his team, realising that the man marking duty given to McGoldrick on Wright had been tactically ineffective and placed Grant Watts up front with Chris Coleman. 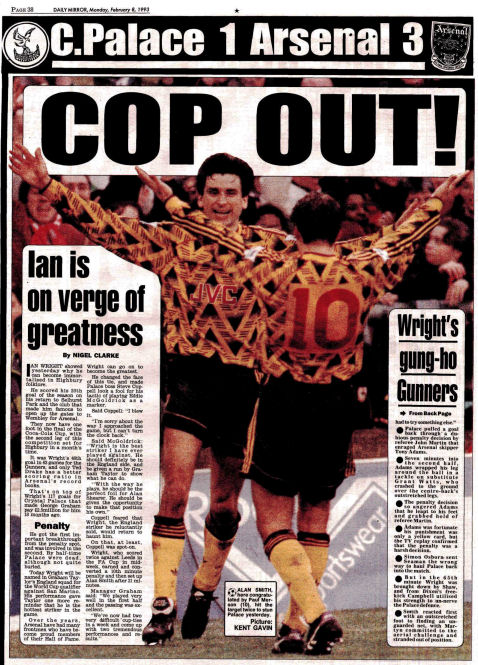 This had the desired effect as Palace managed to at least keep Arsenal’s attack at bay and paid dividends when, in the 54th minute, the pacey Watts was upended by Tony Adams in the box. The award of the penalty was somewhat soft and the TV cameras showed Adams was right to be genuinely aggrieved, but was lucky to only be booked by the harassed referee after his over-zealous and vehement complaints. Simon Osborn converted with an emphatic spot-kick sending David Seaman the wrong way, and the lead was halved.

The scoring was completed mid-way through the second-half when a Lee Dixon free kick was powerfully won in the air as Kevin Campbell robustly beat Young in the Palace defence, and Smith pounced on the close range chance to restore Arsenal’s two goal lead. 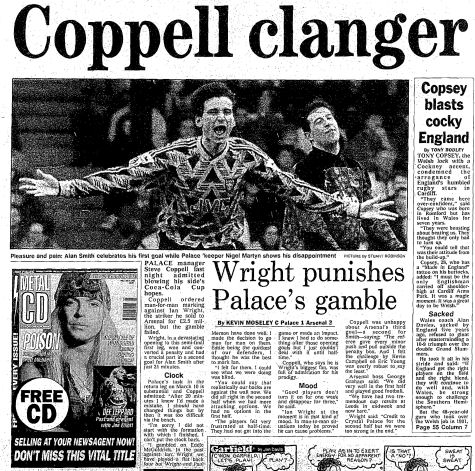 Graham’s Gunners had done enough in this game and the second-leg of the tie played on 10 March at Highbury was a low key affair, with Arsenal running out 2-0 winners, and 5-1 on aggregate.

Coppell commented in the post-match interviews: “After 20 minutes I knew I’d made a mistake…I gambled on Eddie McGoldrick. I’m sorry I did not start with the formation with which I finished. I can’t put the clock back…Ian Wright at the moment is in that kind of mood.”

George Graham right after Arsenal’s second away cup win inside a week simply said, “We did very well in the first half and played good football.”

He was more effusive a few days later stating: “that’s the sort of occasion which appeals to Ian Wright. Alan Smith deserved headlines too, after his goal. That win was a tribute to the backbone right through the club. You write off Arsenal at your peril !”

Additionally he found time to praise a younger player: “Ian Selley’s fitness was unbelievable. He looks like a schoolboy and plays like a man…he tackles hard, passes accurately and has the right temperament “

George extolled the away support, “Thanks to our loud support at Elland Road and Selhurst Park” but asked for abit more when at home, “Please sing louder at Highbury. It does make a difference”.

This was the first time that Crystal Palace had reached this stage of the League Cup whilst Arsenal had been here six times previously.

Although Arsenal kicked off this game with 11 Englishmen, only Lee Dixon and Tony Adams started the England game against San Marino the following week.

George Graham was obviously not put off by Eddie McGoldrick’s performance as he signed him five months later, following Ian Wright who had made the same move in September 1991. In January 1997 Andy Linighan made the reverse journey.

This was Arsenal’s fifth consecutive win against Crystal Palace, a run that would eventually be extended to seven.

The rest of the Coca Cola cup run:

Sheffield Wednesday were the opponents in the final on 18 April and, after going behind to a John Harkes goal, Arsenal equalised through Paul Merson and then Steve Morrow hit the second mid-way through the second-half. Unfortunately, the scorer of the winner could not pick up his medal as he was taken to hospital after some post-match high jinks involving Tony Adams that resulted in a broken arm for Morrow.

A week earlier saw the return to Arsenal from Everton of Martin Keown for £2m. He missed out on Arsenal’s double domestic cup triumph having already played in both competitions for Everton.